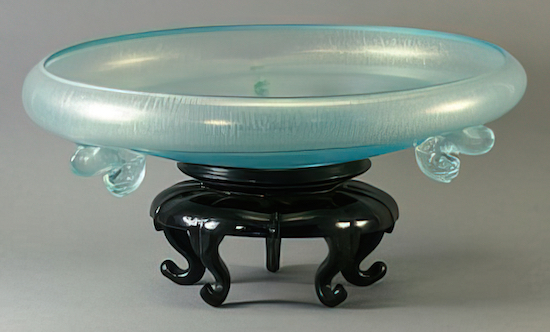 I’m a little early for Stretch Tuesday, but I couldn’t resist getting on board for our water theme and sharing the display table which Jeff, my partner, created with Celeste Blue and Aquamarine dolphin stretch glass. 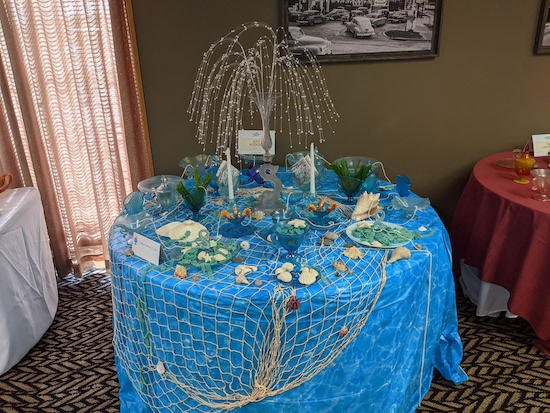 This display was presented at the 2021 convention of The Stretch Glass Society. Fenton made all the dolphin stretch glass, both in the early period and in the late period. Stretch Glass dolphin items are known in Celeste Blue, Aquamarine, Topaz, Florentine Green, Tangerine, Ruby, Wistaria, Velva Rose (all early period) and many colors from the late period (a topic for another time). Fenton’s catalog offers Persian Pearl dolphin items for sale, but we have not, to my knowledge, ever found a true Persian Pearl dolphin item. Jeff focused mostly on the early period Celeste Blue and Aquamarine Fenton stretch glass dolphins but included a colorless French vase with a frosted dolphin base which is from the late 1800’s or early 1900’s – you will see that in the middle of the table. On the table he has a number of the shapes in which Fenton made dolphins including a center handled tray, a butter ball tray (a smaller version of a center handled server), comports with square and oval tops, footed comports (much larger than the comports which were intended for bon bons and other candy or nuts), candleholders and a mint cup. I realize it is difficult to make these all out on the table, which was decorated to look like the sea, complete with edible seaweed (candy) and white chocolate shells. Here are some photos of some of the dolphin pieces which Fenton made (which may or may not be in the table display) so you can better see the dolphin stretch glass. As you can see, Jeff is the creative one! 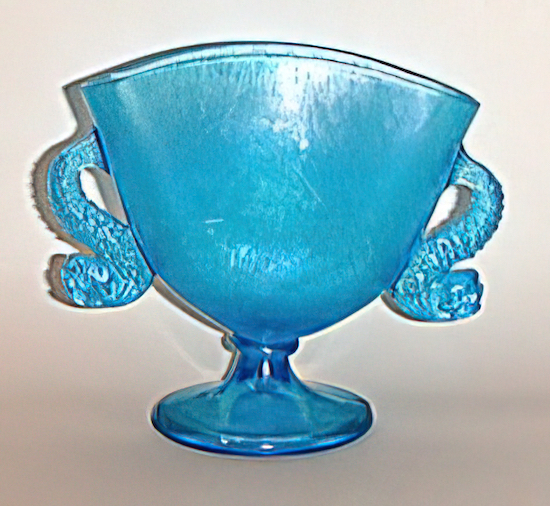 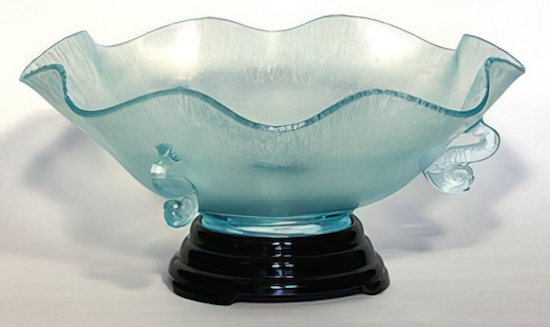 This is the flat base bowl crimped; it has three dolphins on the sides, often referred to as Triple Dolphins.

This is the one of the bowls with a flat base which also has three dolphins. This shape is referred to as wide flared cupped, or if you were talking to Bill Crowl, it would be the ice cream shape. These bowls sit nicely on the Fenton 5-legged black bases and elevate the bowls so that the dolphins are more visible. This bowl is in Aquamarine which was used extensively with the dolphin molds.

Here is the same bowl as the one above, but without a base. The dolphins actually sit on the table as they hang down beyond the base. Now you see why these should be displayed on a black base. 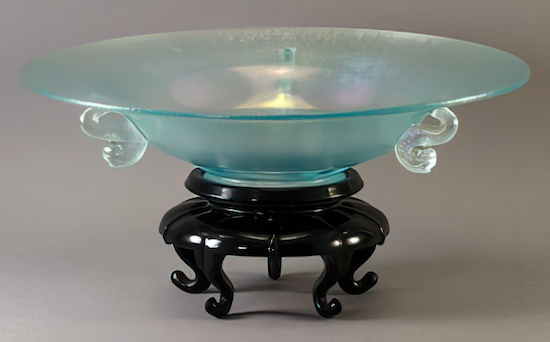 Here is a third style of the same bowl as seen in the previous 3 photos, this is considered wide flared. 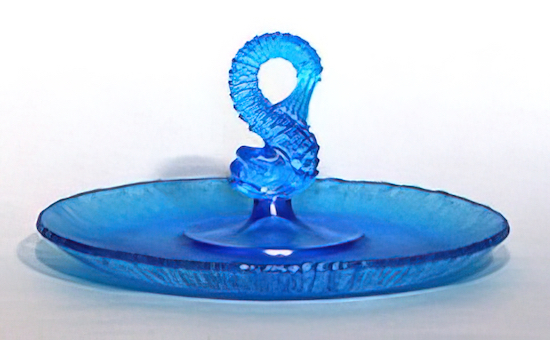 Here is the butter ball tray with a dolphin center handle. Only a few of these are known to exist in Celeste Blue. 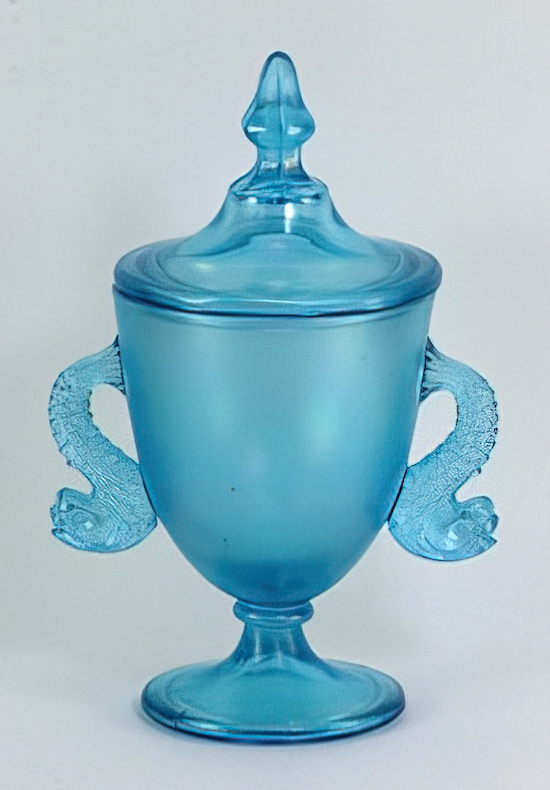 This is one of the 2 candy jars (differing only in size) which have 2 dolphins on the sides. The candy jar base mold was used for the comports and the fan vases, so all of these items have 2 dolphins on opposite sides. The color of this candy jar is “light blue”, it does not seem to be either Celeste Blue or Aquamarine – maybe just a bad batch of glass from a coloring standpoint. The candy jars in blue are also hard to find. 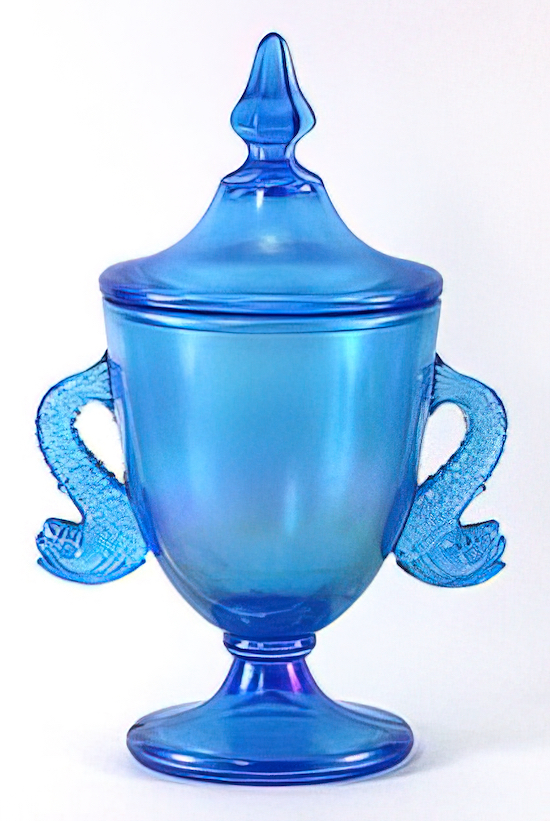 The candy jar in Celeste Blue is a real find. 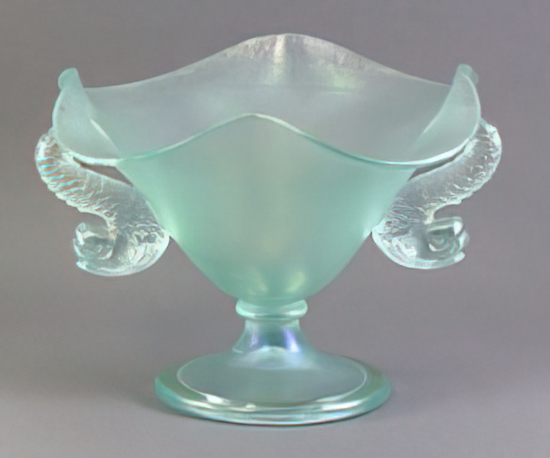 Now we are back to Aquamarine with a square comport; note the 2 dolphins are in the same position as on the candy jars and fan vase 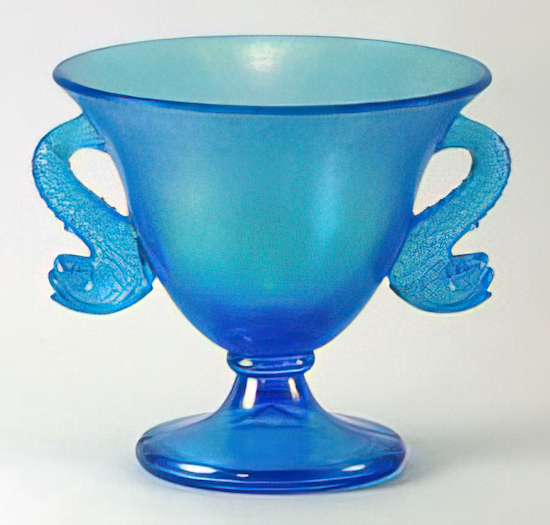 This is the comport as near to the shape of the mold as you are likely to see. The candy jar base is ‘as molded’ and this comport was flared a bit but retained the round shape. It is another rare item in Celeste Blue. 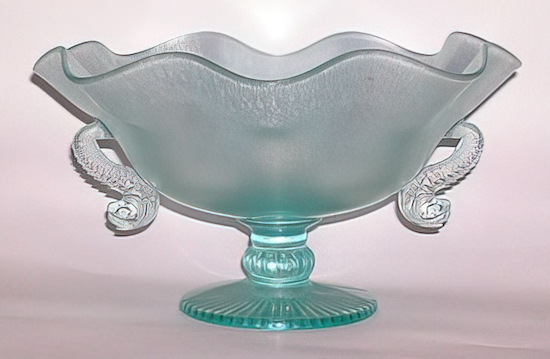 Here we see a large footed bowl. This mold was used to make a number of different shaped bowls but the foot is always the same. Here is the crimped bowl in Aquamarine. 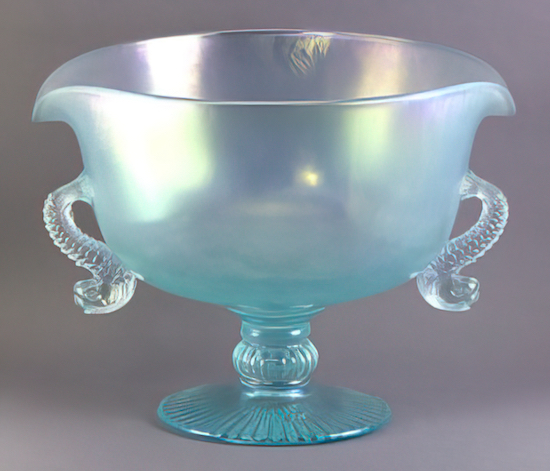 This footed bowl is from the same mold as the previous one, however this time the bowl is oval or ‘helmet shaped’ as we call them. Again, it is in Aquamarine. I am not aware of one of these footed bowls in any shape being known in Celeste Blue; maybe you have one in your collection that you can share with us? 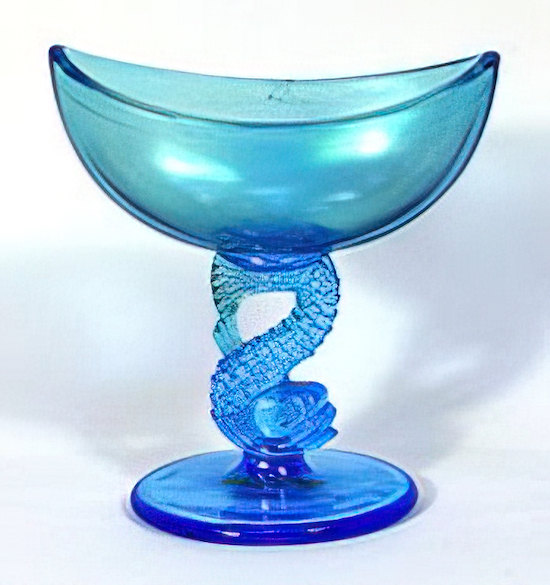 This item is known by several names: nut comport, mint comport and eye cup. Obviously it is not an eye cup, it is way too big for that and Fenton was not in the business of making medical glass items. So it is either the mint or nut cup. Whatever it is, it is a rare item in Celeste Blue. It is interesting how Fenton incorporated the dolphin in the stem this time. 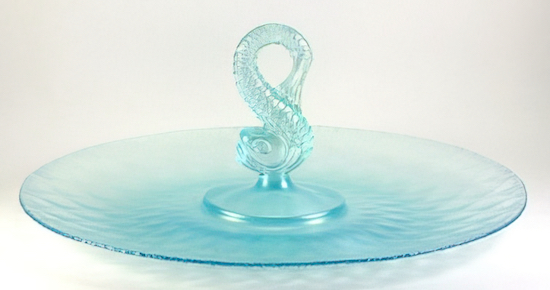 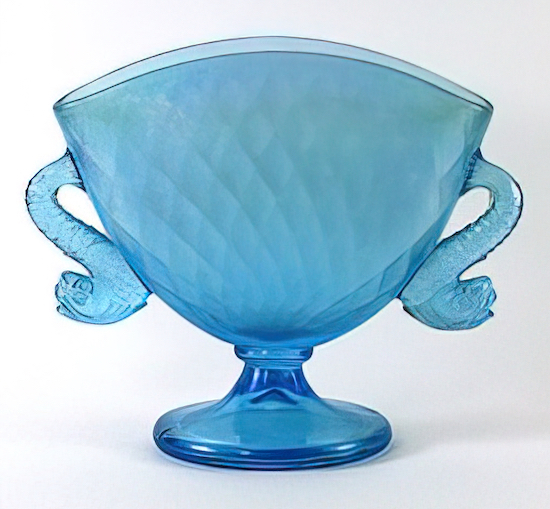 Finally, the double or twin dolphin fan vase with the diamond optic treatment in Celeste Blue – a tough item to find. The fan vases, comports and candy jars were produced in two distinct sizes, one with a 3” base and the other with a 3.5” base. When you have two items side by side it is easy enough to distinguish the larger from the smaller but out in the wild you will likely need a tape measure. The base is the only reliable point to measure these items because it did not change during re-shaping.

There is no guarantee that every item in every shape in every color was made in both sizes, but there are a number of items where you can find both in a number of different colors. As with many of our collectibles, dolphins can be a collection within a collection. Fenton used the dolphin molds again after the stretch glass era ended and made many of these items without iridescence and then pulled the molds out once more in the later period (1980 and later) to make more dolphins. The Stretch Glass Society had Fenton make several dolphin comports in colors not previously made and we are responsible for the Ruby double dolphin fan vases which exist today as they were one of our convention souvenirs.