BugDoc Dave here with some stretch glass for this month’s theme of Dugan. After our two months of visiting foreign carnival glass, we have a theme that stretch glass enthusiasts can contribute to! In short, only American glass companies made true iridescent stretch glass, though many foreign companies made art glass with the iridescent stretch finish. Technically, the Dugan Glass Company didn’t make stretch glass, so I’m going to cover the production of the Diamond Glass Company, which was the new company name for the old Dugan Glass Company. This name change occurred in early 1913, so they were still making carnival glass using the original Dugan molds. In the early 1920s, Diamond began advertising their new “Lustre” lines that appear to be what we would call stretch glass today. They produced a tremendous array of items and I’d like to acquaint you with the colors that we know.

Like the other companies that made stretch glass during this period, Diamond made Pearl (crystal glass with a white iridescence): 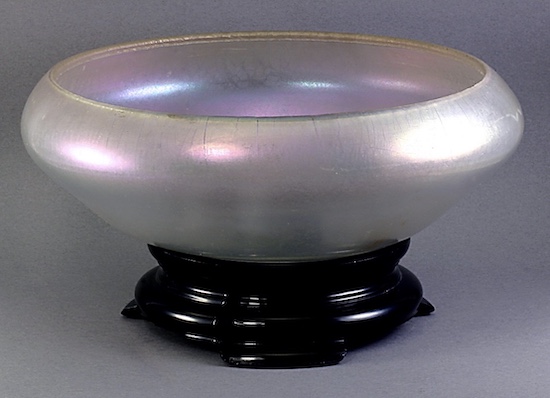 Blue (which was also called Harding Blue or Vesuvius Blue in some of the catalog pages): 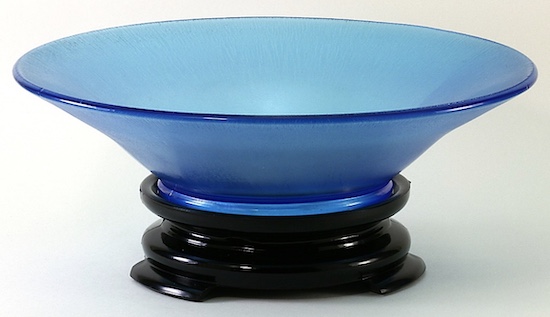 Green (and Green Shimmering, are very similar to Fenton’s Florentine green, but with a bit more yellow tone): 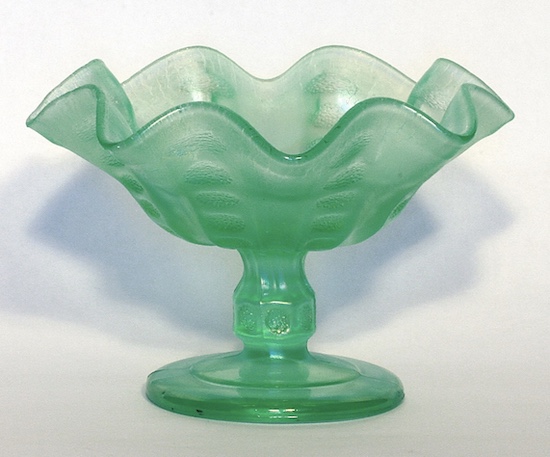 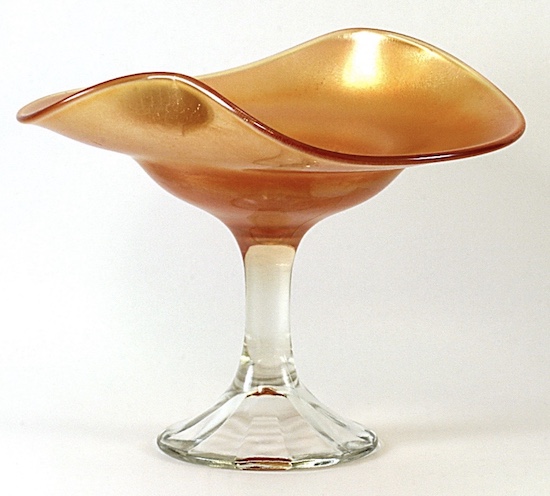 And, Amethyst and Twilight Wisteria pieces are a medium purple glass: 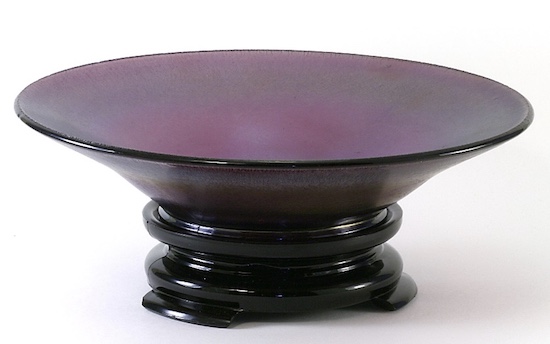 Diamond also made a darker amethyst glass that was called Midnight Wisteria. Midnight Wisteria often looks black when sitting on a table, but when you hold the piece up to the sun, it is clearly a dark purple glass:

These were the colors initially identified by Diamond, but other colors soon were on the list.
After Glow and Rose Shimmering were used to describe their pink stretch which is very similar to the Fenton’s Velva Rose. Pieces in this color are very difficult to obtain: 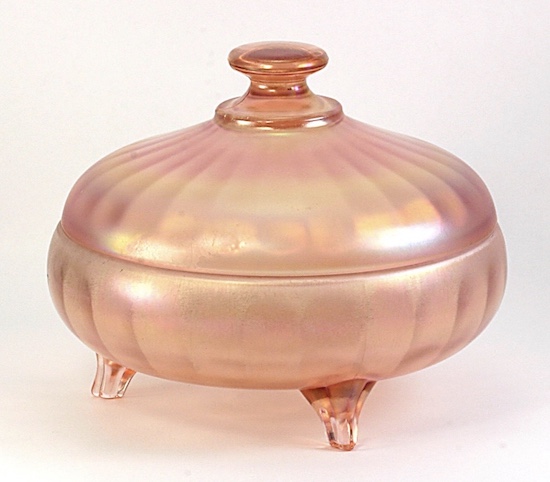 To my eye, the most striking stretch glass color made by Diamond was their Egyptian Lustre. This is a true black amethyst glass with multicolored stretch iridescent coating. The glass is virtually opaque except when held up to direct sunlight when it may exhibit one of two colors, a very dark ruby or a very dark blue. This has given rise to some collectors giving them different names, but this was never intended by Diamond. Here is a flip vase where the iridescence struck an elegant green: 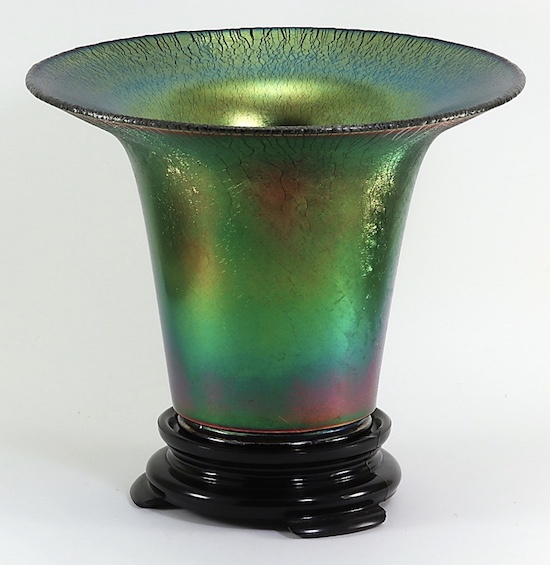 And here is a plate with multicolored iridescence and gold enamel rim: 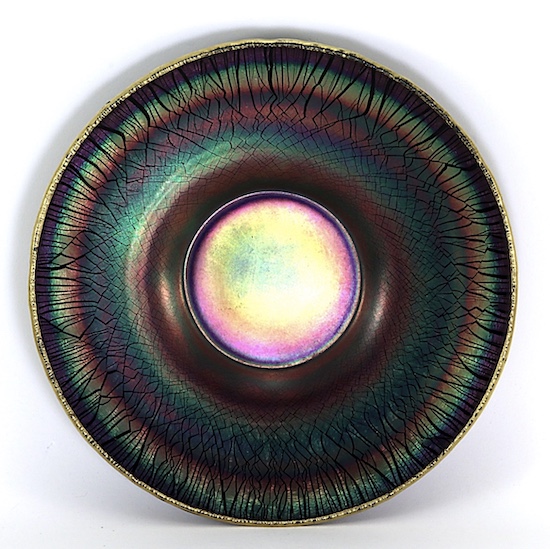 Diamond also made a dark cobalt blue color that was so heavily doped, it crackled the glass. This very desirable color was called Blue Crackle: 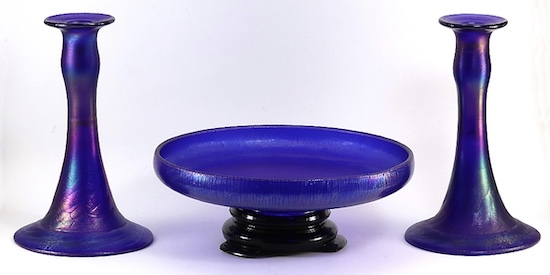 There are two additional colors that we don’t see described in the Diamond catalogs or in the trade journals of the time, ruby/amberina and topaz. There have been a couple of bowls in ruby thought to be Diamond’s, but upon closer measurement, they have turned out to be Fenton bowls with iridescence inside and out. However, there is a Diamond covered bonbon that is definitely ruby/amberina: 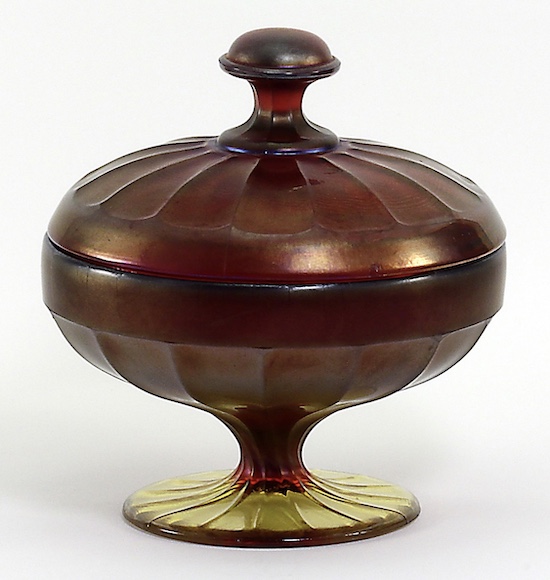 The topaz (yellow Vaseline in collector’s minds) pieces are not common, but are definitely from Diamond molds:

The last two colors are often difficult for stretch glass collectors to accept, but both colors were described as being in the Lustre Line by Diamond: Ruby Lustre and Royal Lustre. Ruby Lustre pieces are a nice, even ruby through-and-through, but they were given a shiny, mirror-like iridescent finish that ranges from silver to gold. Even carnival collectors often turn up their noses to this effect. However, when you get several pieces accumulated, it has its own appeal: 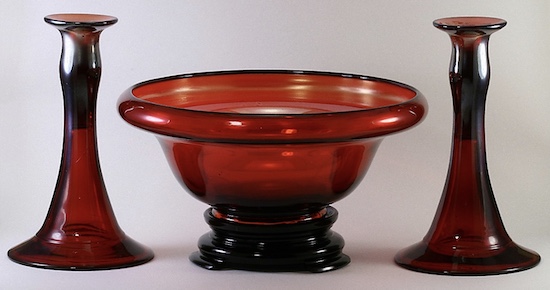 The Royal Lustre is the same iridescent effect on a cobalt blue base glass: 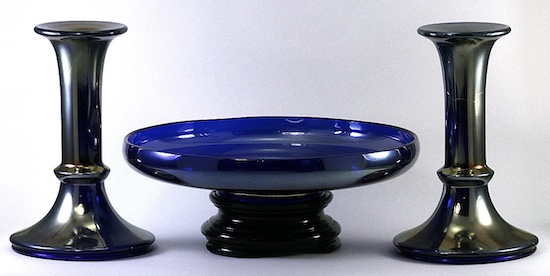 I’ll end this article by reminding you that the Stretch Glass Society is busy getting ready for our Convention that will be held next week in Cambridge, OH from July 14 through July 17 when the Burns Carnival Auction Service will have an auction of some great stretch glass pieces with some other similar glass included. Even if you can’t attend the entire meeting, feel free to drop by, see our display of U.S. Glass stretch pieces (emphasizing the #179 and #151 lines), and other talks and events. You can see the full schedule on the Stretch Glass Society Web Page: