BugDoc Dave here with the first Tuesday Stretch of February 2021! Red is something that is pretty easy for stretch glass collectors, though only a couple of companies made ruby stretch. Fenton and Imperial made most of the red/ruby/amberina stretch glass, but we know of one Diamond covered bonbon in red and Diamond’s Ruby Lustre (ruby glass with a mirror-like finish) is fairly obtainable.

While I really like the Fenton Ruby Stretch, it can be a bit difficult to appreciate in dim light. Frank Fenton stated that they always tried to make their ruby stretch deep red through and through. This often resulted in their ruby being almost an oxblood red which doesn’t transmit light well. One of the most common pieces of Fenton Ruby Stretch is their #604 bowl. This item is most commonly seen in a flared punch bowl shape, but it comes in several other forms, including a crimped (ruffled top) form: 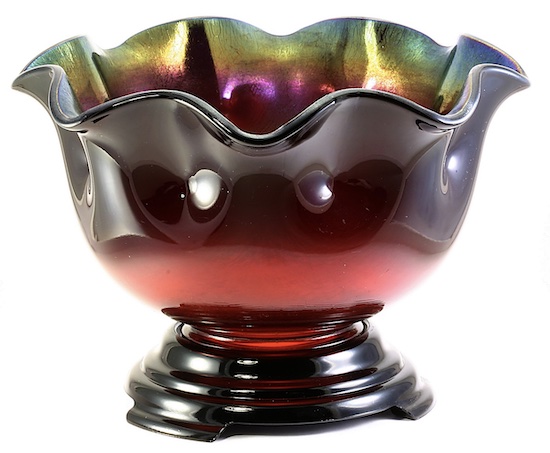 Notice that another common feature of Fenton’s original Ruby Stretch bowls was that the exterior surface was usually not iridized. However, a few bowls were iridized, and these are highly prized by stretch glass collectors. Here is a #604 bowl in the aquarium shape that was iridized on the outside: 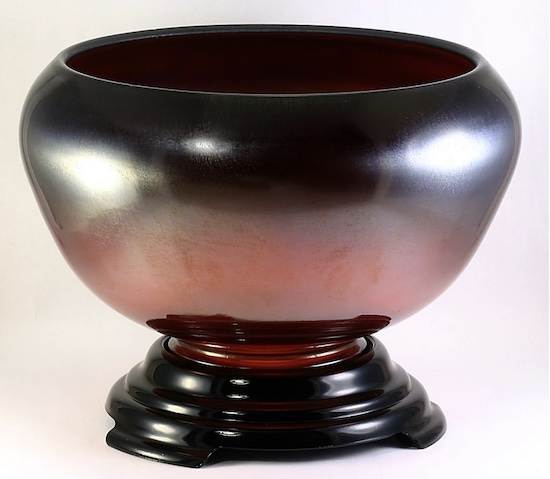 Other pieces of Fenton Ruby Stretch from the early period are the “Colonial” style candleholders. The 8 ½-inch and 10-inch versions are fairly common, but highly desired by collectors. Here is a set of the 10-inch #349 candleholders. Notice that they are so dark, it is difficult to tell if they are red or purple without strong lighting. 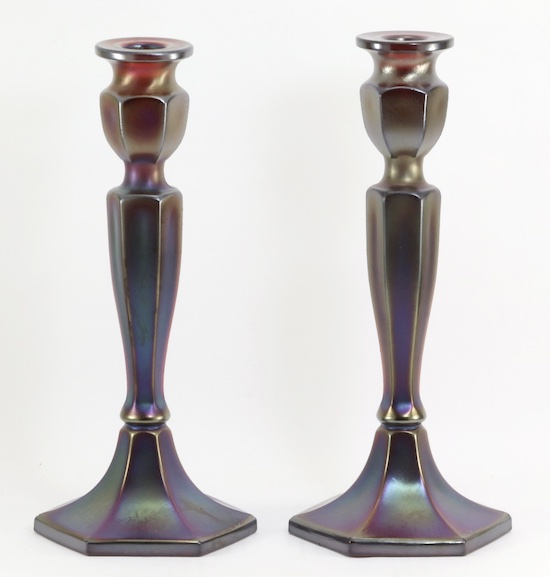 Fenton also made a few vases in Ruby Stretch. Here is an example of one of their #621 vases with a crimped (ruffled) top. Like the candleholders, it is so dark, it’s difficult to tell if it is a dark wisteria or ruby without a bright light. 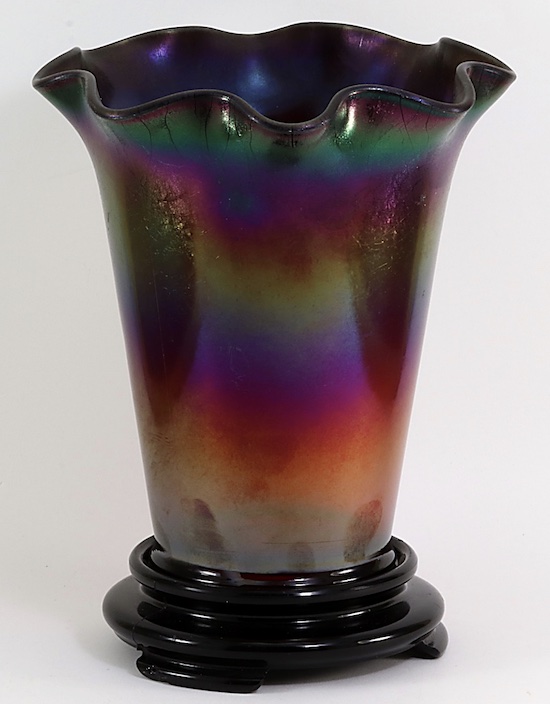 Imperial made quite a bit of Ruby Ice (we now know that this was the name that they used for their red/amberina stretch glass). The most common pieces are the wide panel plates and bowls. The 8-inch plate can range from an orange-amberina to a true deep red to amberina. 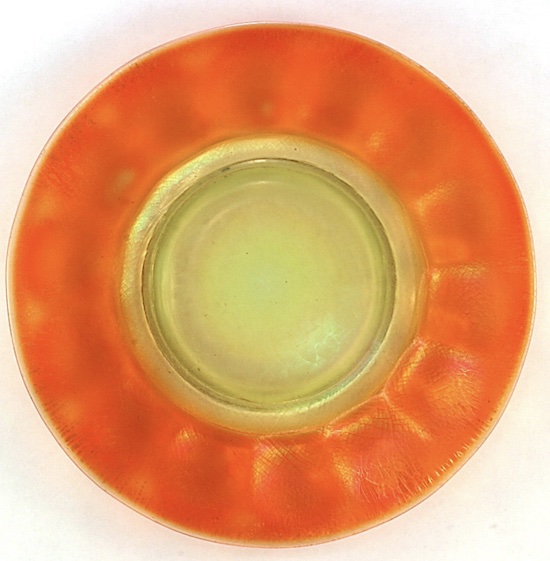 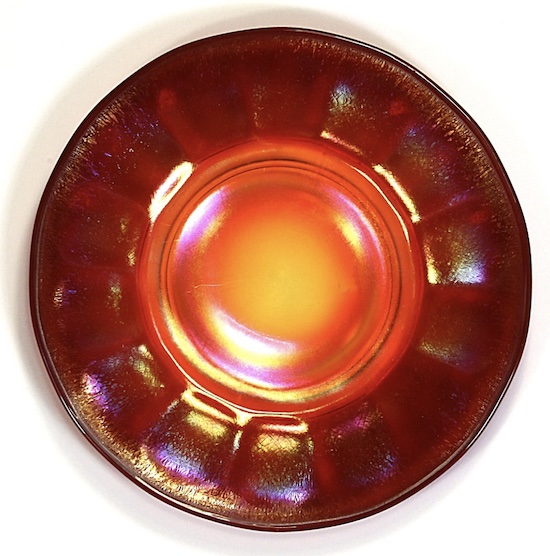 And here is an example of their 8 to 10 inch wide panel bowl: 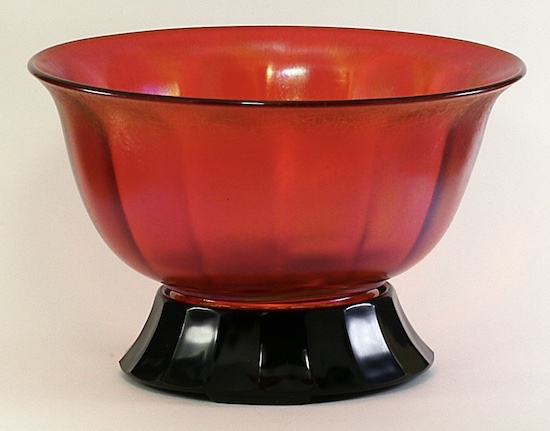 The largest of the Imperial Ruby Ice pieces are the #600 comports that are commonly more than 12-inches in diameter: 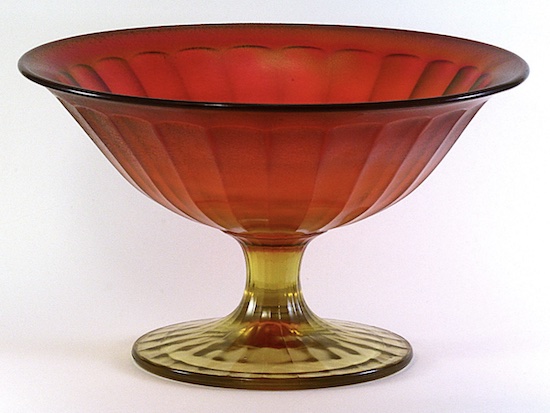 Fenton made quite a bit of red stretch glass in their late-production period and these are usually iridized inside and out. Pieces can be found that are really dark to more of an amberina. One of my favorites is their Persian Medallion comport in Red Stretch (even though it has a pattern! LOL!): 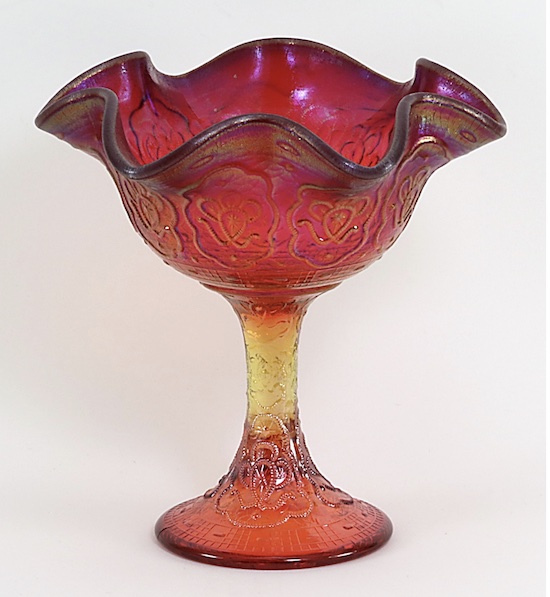