BugDoc Dave here with the first Tuesday Stretch of 2021! “Something New!” I’m going to interpret this as “new” iridescent stretch glass.

I have begun to acquire quite a few pieces of “late production” or what I call recent production Fenton stretch glass. Fenton started remaking glass with the stretch effect in the 1970s after experimenting with some new and original dope sprays (the iridescent salts applied to the hot glass to create the iridescent surface). They had made several carnival pieces earlier but hadn’t reheated the pieces after doping to achieve the stretch effect. In 1975 (a year after the Stretch Glass Society was created), Frank Fenton invited the club members over to the Factory to see stretch glass being made. They used a single bowl mold that had the Fenton logo in the base. The workers made several dozen pieces in quite a few shapes, including some swung vases. The workers used pots of ruby, blue, topaz and crystal glass to make the pieces. After the pieces went through the lehr, Frank brought them to the club’s meeting and each member was allowed to purchase a piece. Many of the pieces went into Frank’s Closet and weren’t sold until the company closed. Stretch glass members still cherish these pieces and I’m always on the lookout for the pieces which occasionally show up at shows and auctions. Here is a nice ruby bowl with a six-crimped edge: 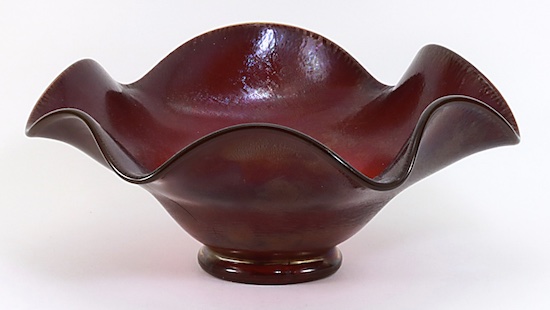 And, a rolled rim bowl in crystal:

A swung vase in blue (a Celeste Blue type): 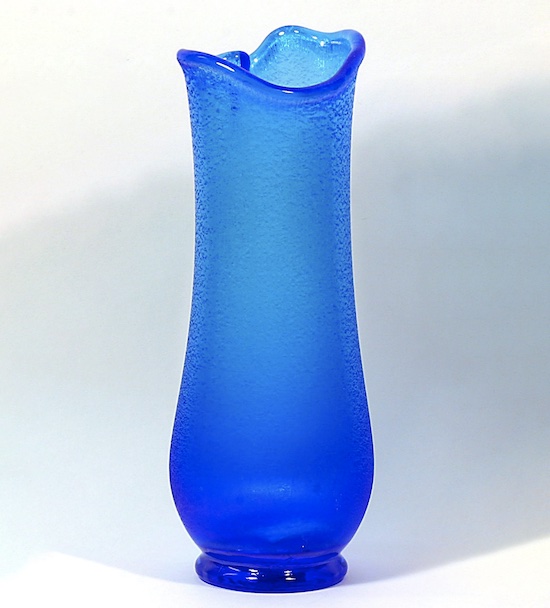 And a Topaz (with opal) bowl: 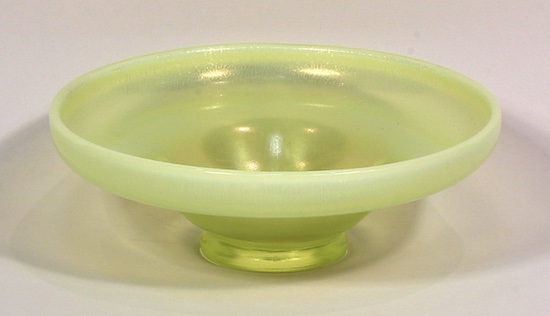 In 1980, Fenton Art Glass brought out a whole line of stretch glass in the original Velva Rose (pink) and a new color Velva Blue (a very pale cobalt-style blue, but not Aquamarine). Here is an example of the epergne in Velva Rose: 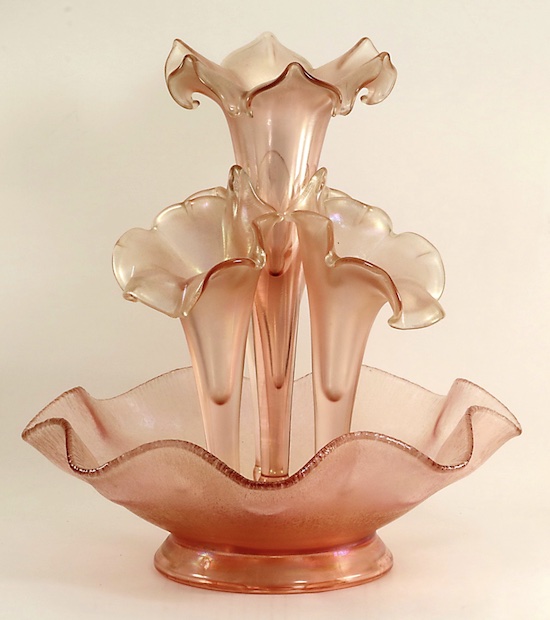 And here is a Sheffield, three-footed bowl in Velva Blue:

Fenton also experimented with putting iridescence on some unusual glass colors. One of my all-time favorites was a run of Coraline bowls that were stretched. When I found them in the Fenton Shop, I asked Frank if they could make more. He quipped, “The Coraline collectors were not happy with them messing with ‘their’ glass, so they wouldn’t be stretching anymore!” So far, I’ve been able to acquire three pieces, but I know there were about a dozen made. 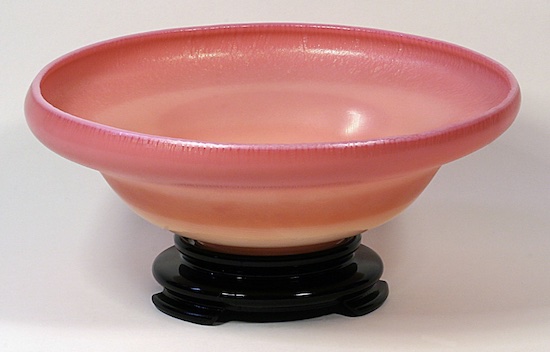 I’m also fond of the baskets that Fenton made with the stretch effect. Many were produced for their general line, some for QVC and others were whimseys made for the shop and for clubs. This purple one (#6539) was in their general line, and it has great stretch iridescence: 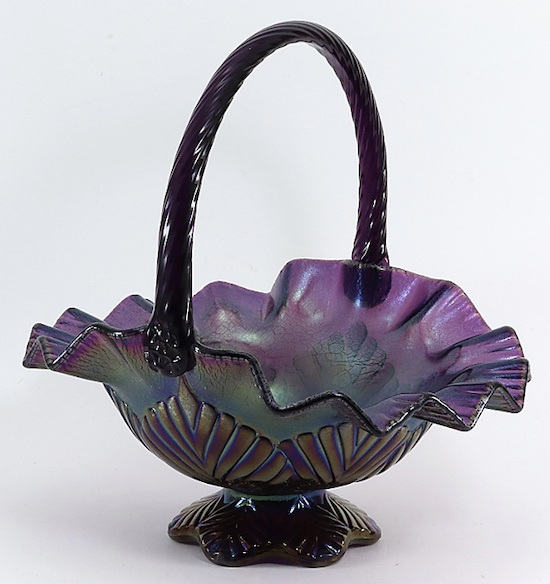 Here is an example of a whimsey basket in ruby made for the Stretch Glass Society: 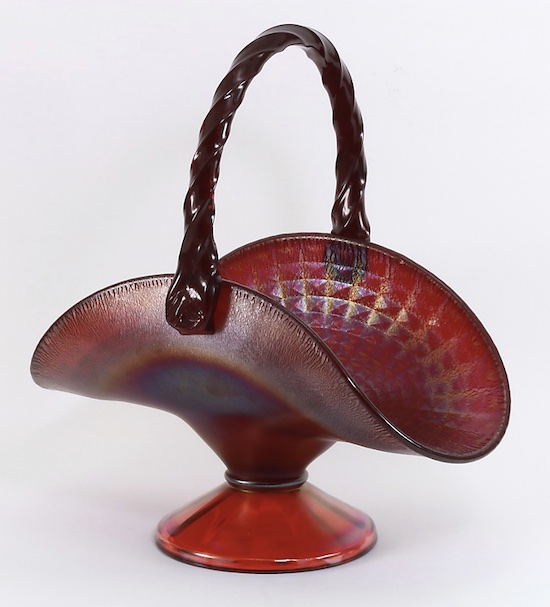 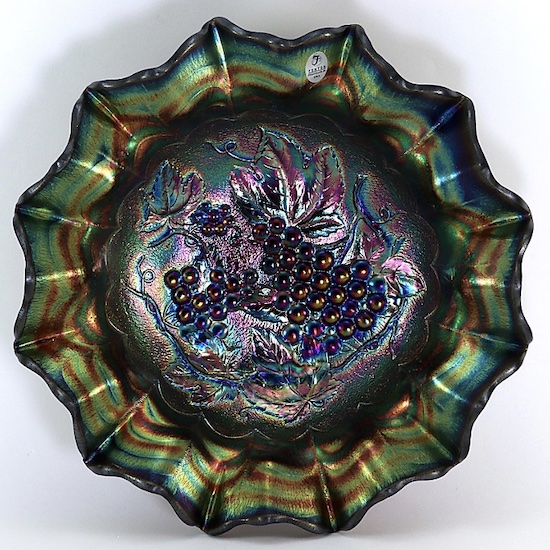 Lots of swung vases have also been made and each one will be unique, just like the originals! Here is the #2753 “Nautilus” vase in a dark cobalt blue stretch. 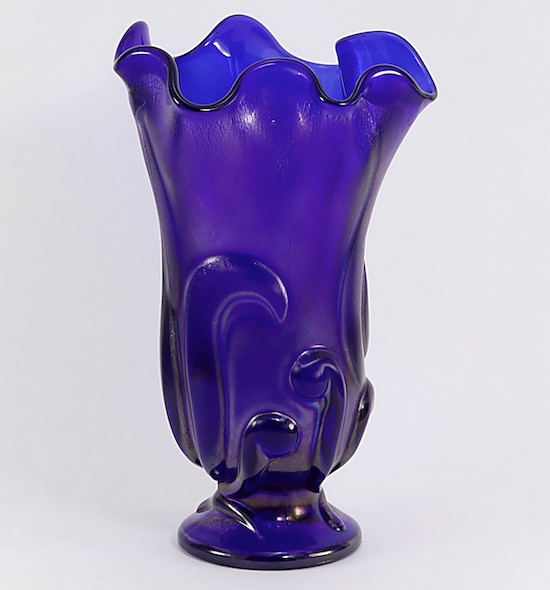 Most of the pieces that were place in the Fenton lines are fairly obtainable, with the QVC pieces being a bit more difficult. Of course, the whimseys and unique baskets are much more difficult to accumulate!

To: George M.
RE: Diamond cup and saucer with rings

Thanks for sharing your marigold example of the Diamond cup and saucer that has rings. Either Diamond made very few of these or they all got broken over the years. I know of a crystal stretch cup and a blue cup that was shaped to form a little creamer. I have four of the little plates in blue, so I suspect that more cups existed at one time. I also have two green plates with these rings that are about 8.75-inches in diameter. Thus, there was probably a line of these pieces with rings, but very few are known today.