BugDoc Dave here with my first Tuesday Stretch article for the month except I missed the date and this is not a Wednesday (hump day) article! This month’s topic, confusing patterns, is really easy for me! To many folks, ALL stretch glass is confusing and many wonder how stretch glass collectors separate out the bowls, comports, plates and dozens of other similar articles made by the glass companies. The simple answer is detail, detail, detail. Of course some of the most helpful features are unique colors. When we find a piece in Tangerine stretch, it’s Fenton. Russet? Then, it’s Northwood. Tonight, I’ll go through a few of the common pieces that are regularly misidentified.

Some of the most commonly misidentified items are the “colonial” candleholders. Many companies made these six-sided candleholders, but only Fenton, Northwood and Vineland dope-iridized them. The Northwood ones are the easiest to identify as they have a ball-shaped enlargement where the stem joins the expanded foot. I’ve selected a pair in Jade Blue which is a unique color of Northwood. These candleholders come in 8-inch and 10-inch versions. 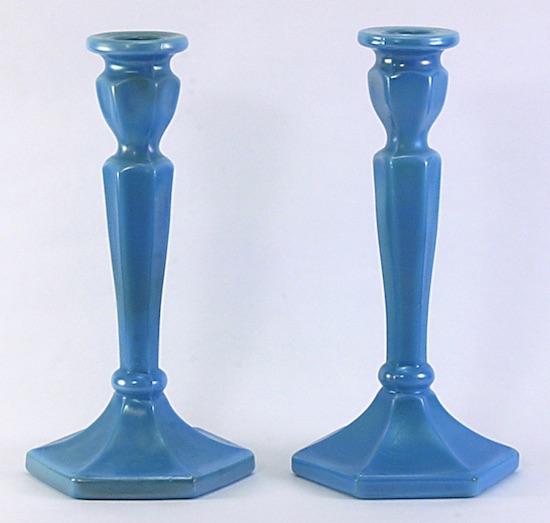 Fenton and Vineland made virtually identical forms where the joint of the stem and base are just slightly expanded. Again, Fenton made a 8-inch and 10-inch version, but Vineland’s only come in the 10-inch size. Here is an example of the Fenton candleholder in one of their colors, Florentine Green that Northwood and Vineland didn’t use. 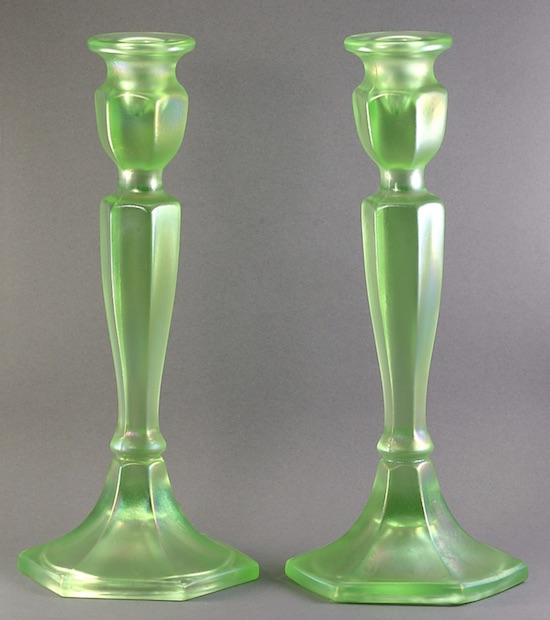 So, how do you tell the 10-inch Fenton from the Vineland candleholders? Fenton used a two-piece mold and Vineland used a three-piece mold. So, if you look at the cup, you will see two mold seams or three seams! Other than blue, most of the Vineland colors are a bit “off.” Vineland’s Wisteria is usually darker than Fenton’s and Vineland made several “Old Gold” variants which range from moderately dark brown to a very dark green-brown. The following is an image of a pair of Vineland candleholders in a lighter amber color. 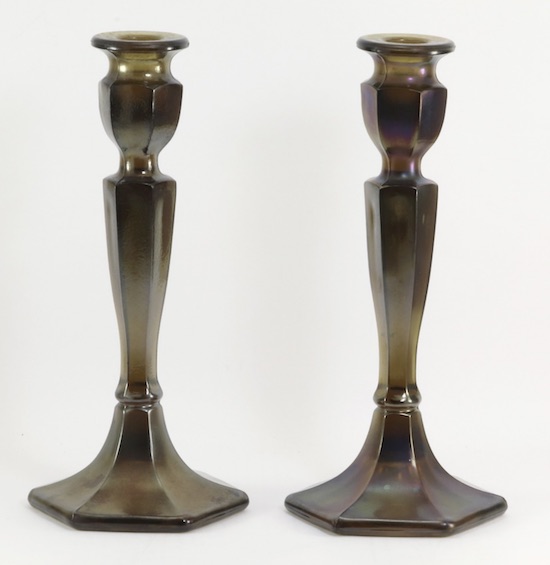 The trumpet-shaped candleholders are also confusing, especially for the 6 to 7-inch size. These were made by Central, Northwood and Vineland. The Central version have a tall candle cup and two rings there the cup joins to the stem. These come in blue, topaz, green and cobalt blue. 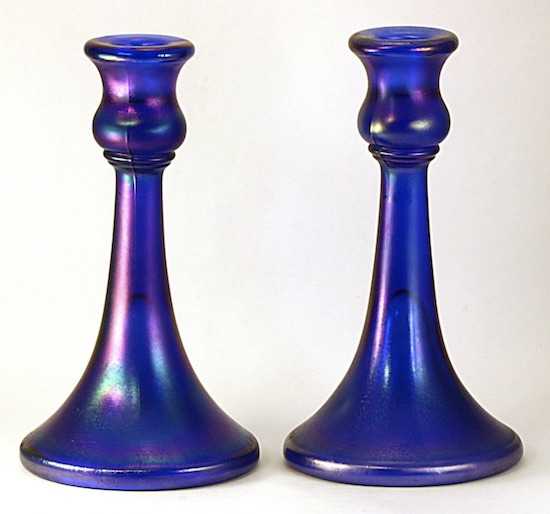 The Northwood version is almost an inch short and has a short candle cup, but also has two rings at the junction point. Here’s a set in Russett which is a unique color. 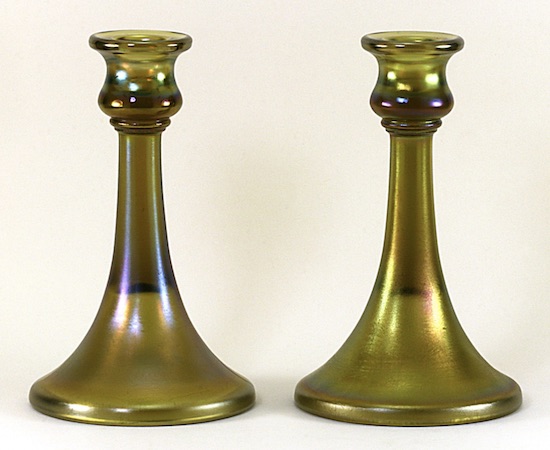 Northwood also made a unique spiral version which has only been found in blue. 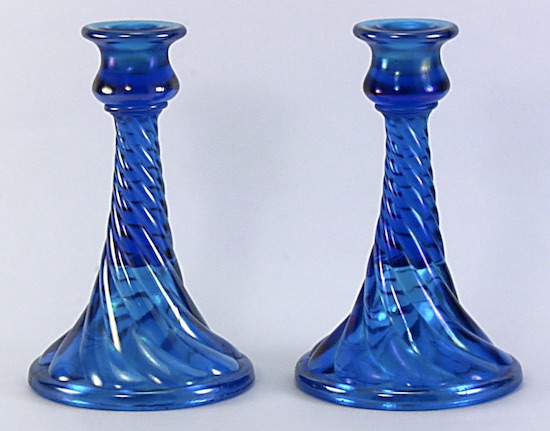 The Vinelands holders come in two versions, slim and thick. Both have short candle cups but three are three rings where the cup joins the stem. Here are two Wisteria ones showing the slim and thick. This makes pairing up single candleholders a bit more difficult! 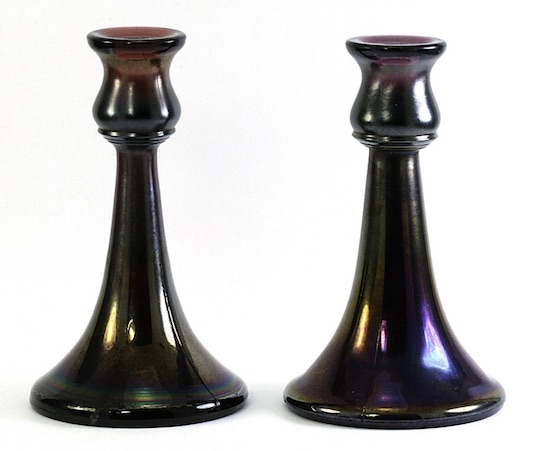 Another group of confusing items are covered candy jars made by Fenton and Northwood. The paneled ones come in pound and half-pound sizes virtually identical unless you have the two of them side by side. Of course, this isn’t usually the case in a mall or flea market, let alone, on eBay! If you can handle them, the simple thing to look at is to see what the lid rim looks like. In the Fenton jars, the rim that fits into the base is straight-sided, but the Northwood ones have a delicate concave side. Here are line drawings that show this difference: 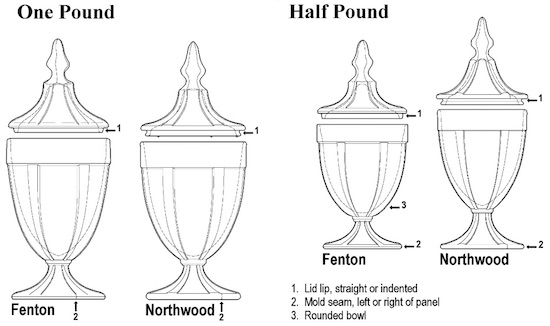 Notice that the half-pound versions are pretty different in that the Fenton jar is more squatty and rounded at the bottom. The Northwood version is taller and slim at the base. Diamond also made a similar set of jars, but the bigger one is a ¾-pound version and the smaller one is a half-pound size. The Diamond ones have three small rings that set off the panels from the upper ring of the jar part. In this image, you can see the two Diamond jars (in blue and green) the Northwood jars (in Jade Blue and Russet) and the Fenton jars (in Velva Rose and Wistaria).

As you can image, it can take quite a lot of diligence to get all the jars in all the sizes and all the colors!

The covered bonbons are also difficult to separate, unless you can handle them! Again, Fenton, Northwood and Diamond made very similar bonbons. As with the jars, the Fenton versions have lids with a straight-sided rim that fits into the base, while the Northwood and Diamond lids have a concave rim. The Northwood bases have the panels with definite rounded tops where the panels meet the upper band, but the Diamond versions have a straight line where the panels meet this band. Another illustration helps you to see these features: 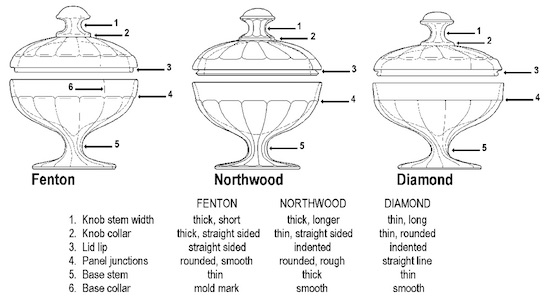 Here are some examples of the Fenton covered bonbons:

And some Northwood examples:

And, the Diamond versions:

And now, if you have free time tomorrow night and want to learn more about Stretch Glass (and using it), check this out: 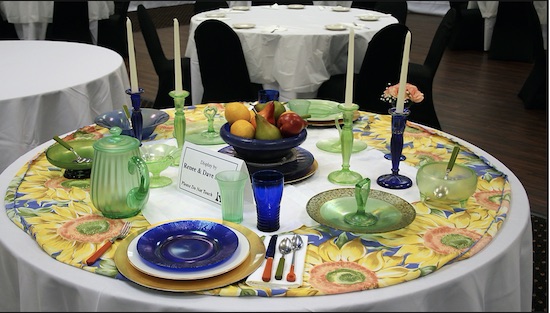