It’s time for Stretch Tuesday once again. Tonight we are picking up with our next souvenir produced in 2000. The Stretch Glass Society returned to ruby glass for this souvenir. Ruby was an ever-popular color with our members. The shape was a footed comport with interior ribs and a flat top edge. Again, some whimseys were made but not in large quantities. 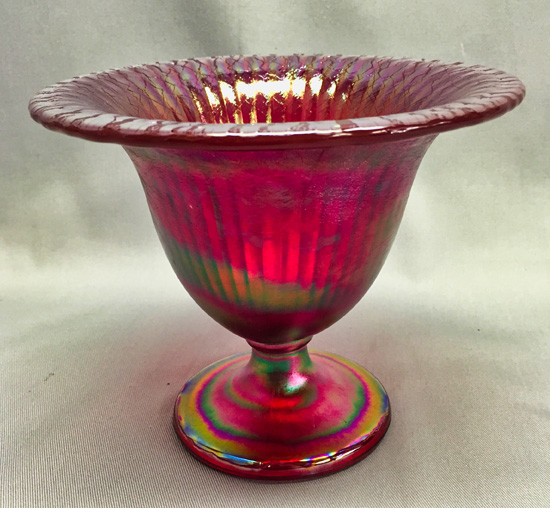 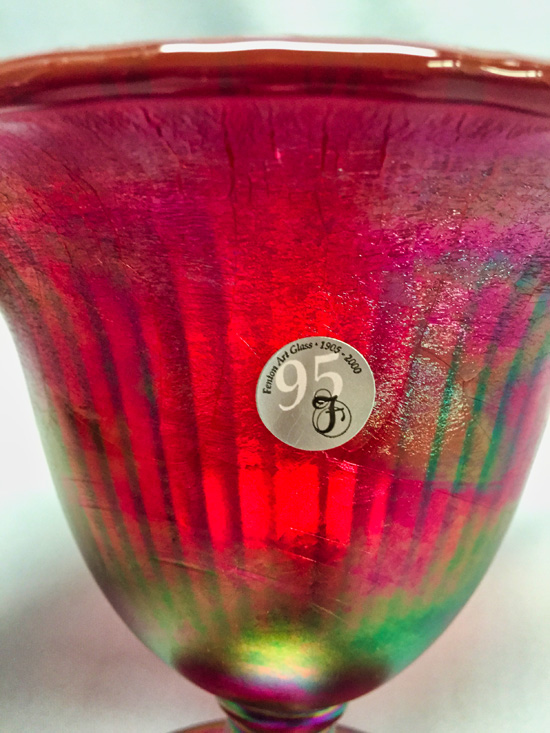 In 2001 we returned to the dolphin comport shape but this time in Aquamarine. The shape is an oval comport and the Aquamarine had a very nice opal edge. This must have been an easy piece to make as there seems to have been quite a few made. Despite them being popular with our members, we still have a small quantity of these in our inventory. 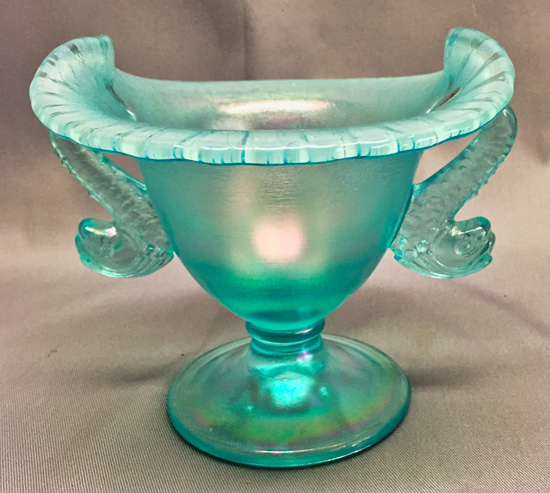 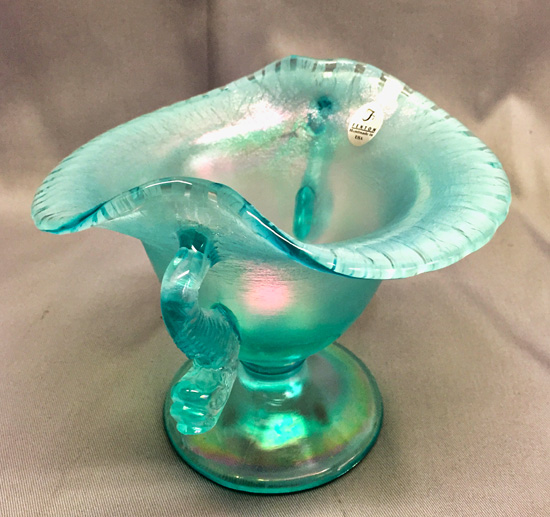 In 2002 Fenton made a completely new shape in a new color for us. The shape was a candleholder in the Melon Rib line (not made during the early stretch glass period when Melon rib bowls, vases and assorted pieces were made). The color was Emerald Green. This was a smaller souvenir than the previous ones and Fenton was able to make many of these in one turn. Frank turned the finishers loose on making whimseys and many of them were produced. We have a supply of both the standard and the whimseys on hand today. 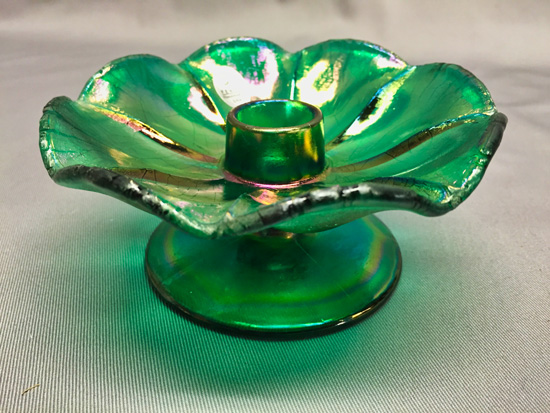 The next year, 2003, Fenton made a footed bowl for us in Topaz Opalescent. The standard bowl has a diamond optic interior, a 6 crimped top edge and 3 scroll feet. As in the past, an interesting array of whimseys was produced including a basket. 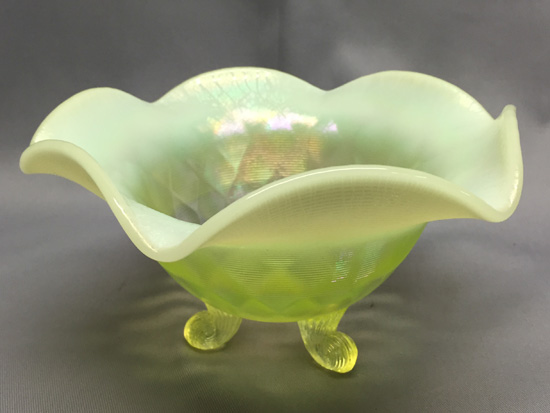 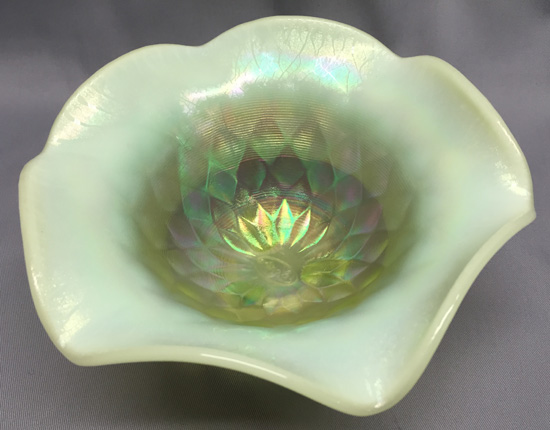 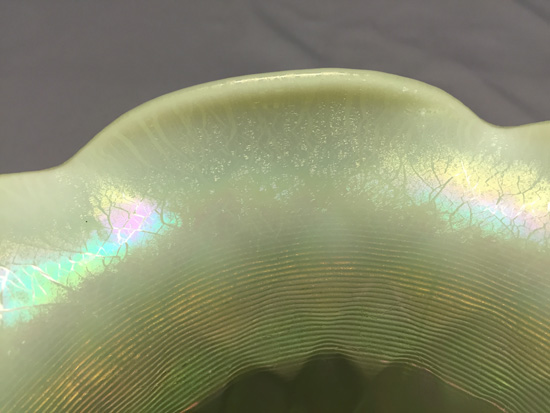 The 2004, 2005 and 2007 souvenirs were all made in Ruby stretch glass, a color which has always been popular with stretch glass collectors. In 2004, the vase Fenton made for us utilized a diamond optic plunger and the tops of the vases were crimped. 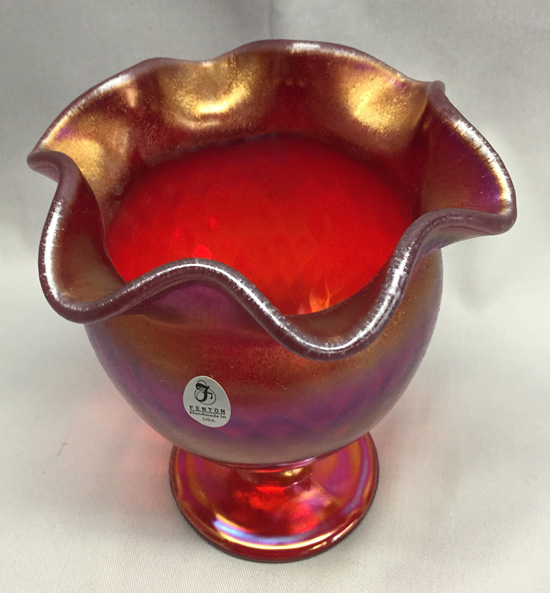 The vase made in 2005 is reminiscent of the trumpet vases made during the early stretch period, complete with a ball of glass just above the foot. 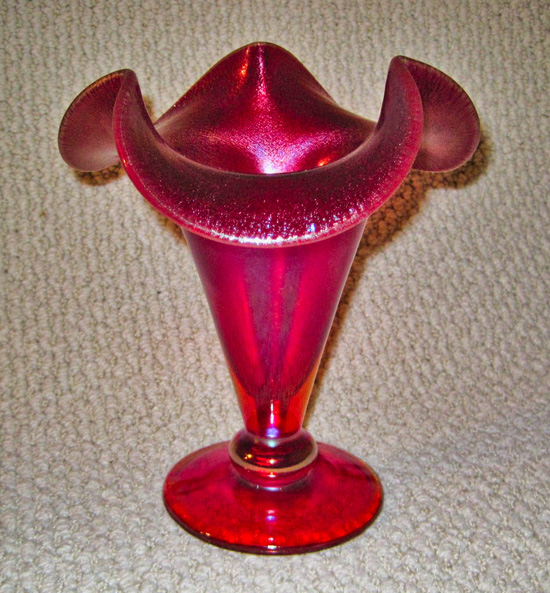 These are crimped in such a way as to create 3 petals at the top of the vase. They are very attractive. In 2007, we went with a smaller souvenir dubbed a mayonnaise bowl which featured a three-sided crimp. 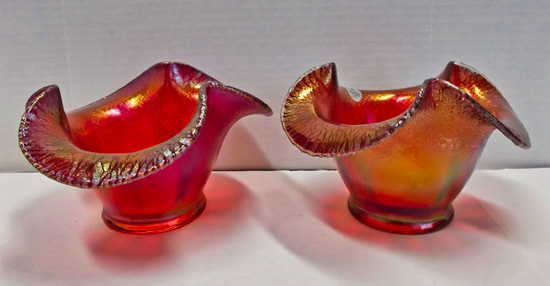 One of these would later be sand carved by Chelsey Murphy.

An Aubergene nut bowl with 3 balls on each of two sides was the souvenir in 2006. It was both a popular and useful item and provided popular with our members. 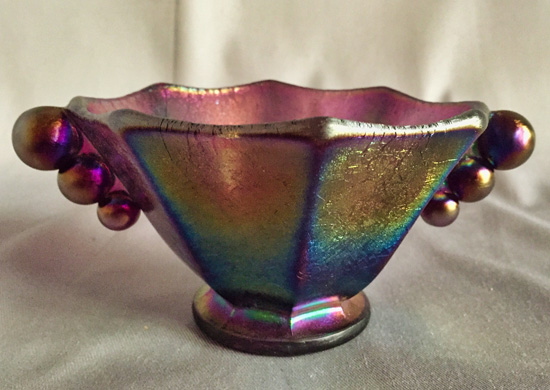 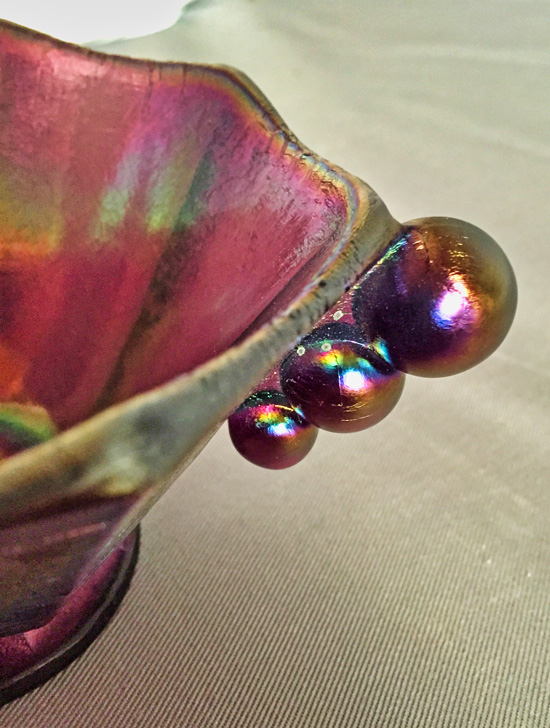 The most recent souvenir produced was for the 2010 convention. It is a small cake stand made in Violet stretch glass by Fenton. 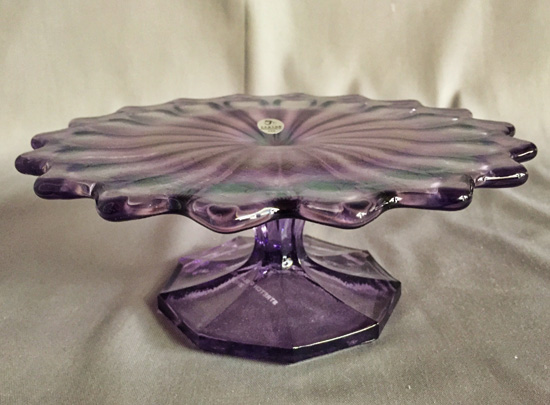 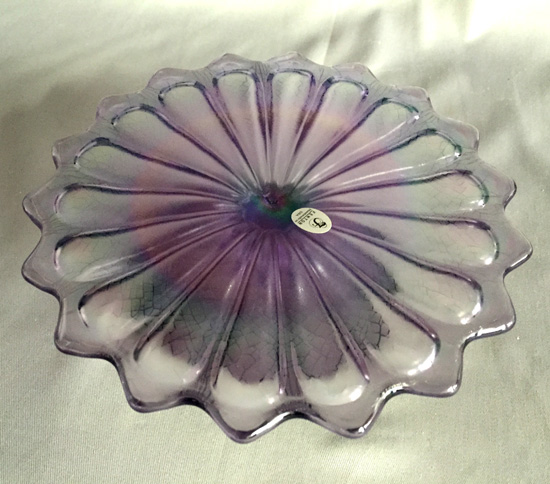 A number of whimseys were made which are shown here. 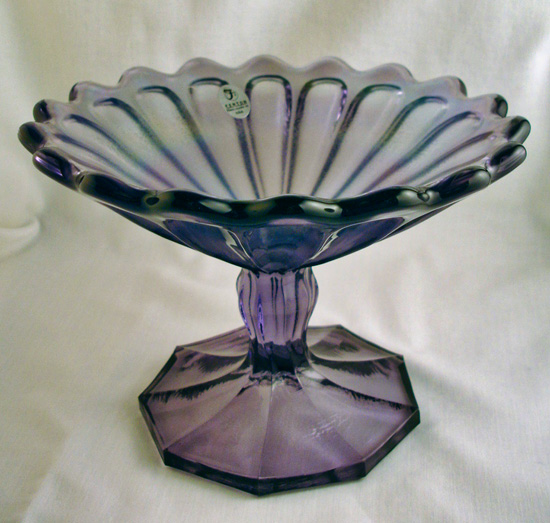 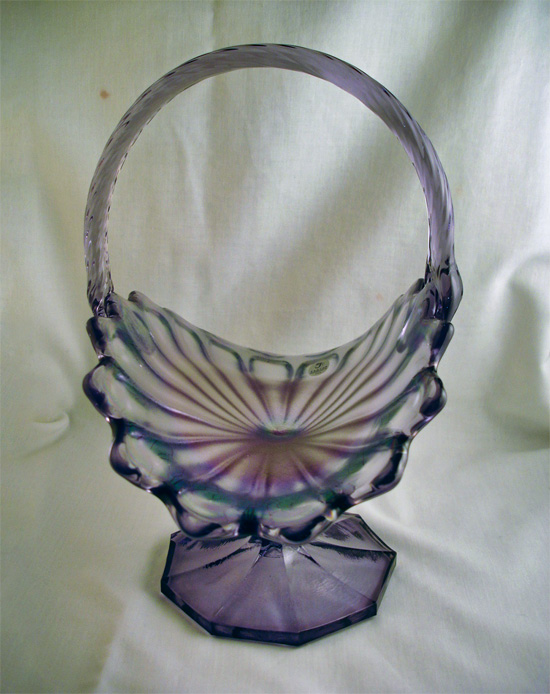 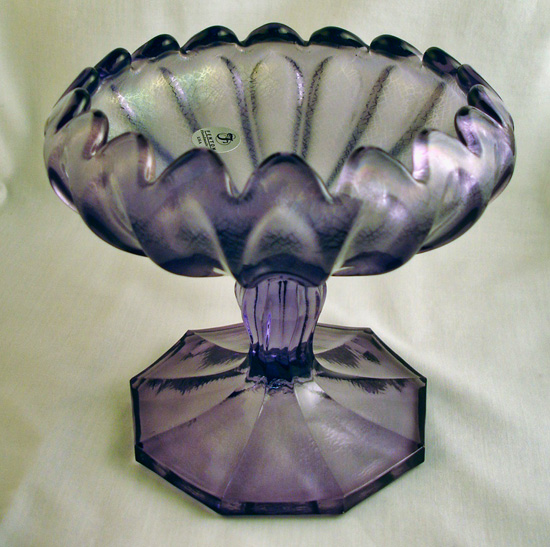 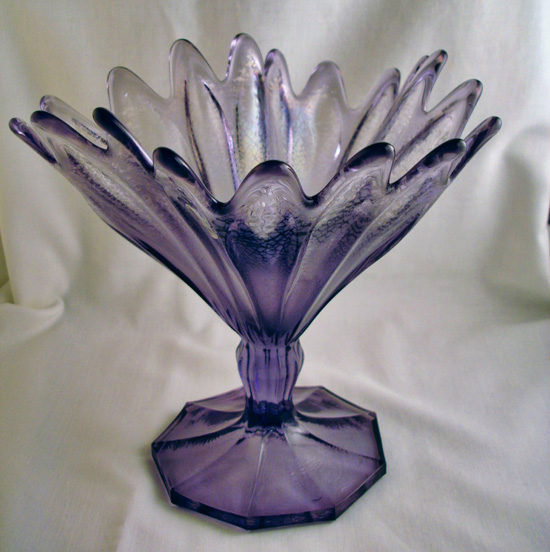 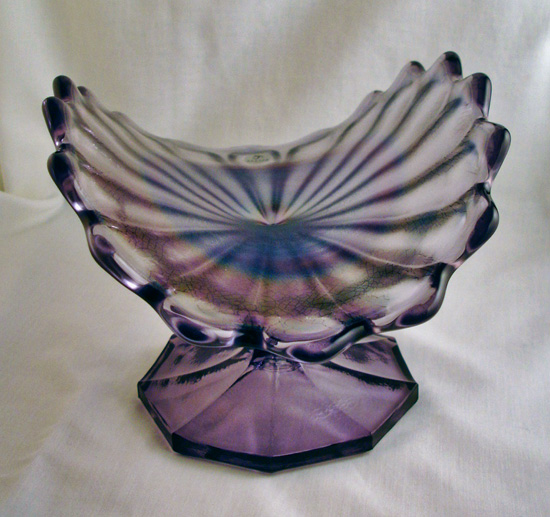 Due to only a limited number of pre-orders, a smaller quantity of these was made. As a result, they are not often found for sale.