Happy Tuesday Stretch – Last week Dave shared some of our convention souvenirs with you. I’ll show you a few more tonight and then some more in two weeks for our regularly scheduled Tuesday Stretch.

The Stretch Glass Society had The Fenton Art Glass Company produce a stretch glass souvenir almost every year from 1994 through 2007. Our last souvenir was produced in 2010. I never had the opportunity to be at Fenton when our souvenirs were being made but Dave was kind enough to take videos of them making some of our souvenirs. Those videos are available on www.stretchglasssociety.org if you want to take a look at them. Generally, there was a turn of standard souvenirs made and then if glass and time allowed, whimseys would be made. We generally purchased all the standard souvenirs along with all or most of the whimseys and sold them to our members. We maintain an inventory of some of these souvenirs as well as some of the whimseys. These are now available for sale to both members and non-members. 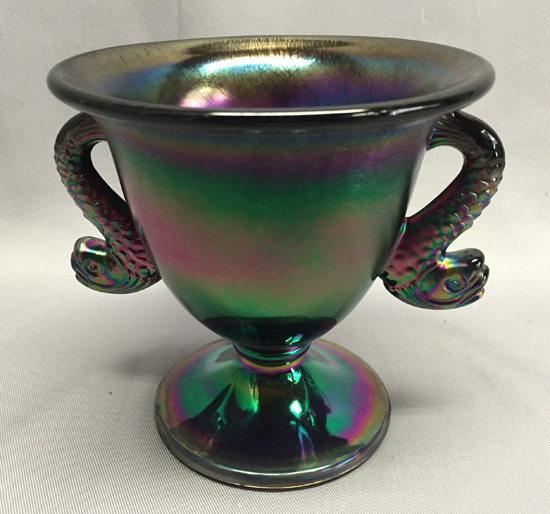 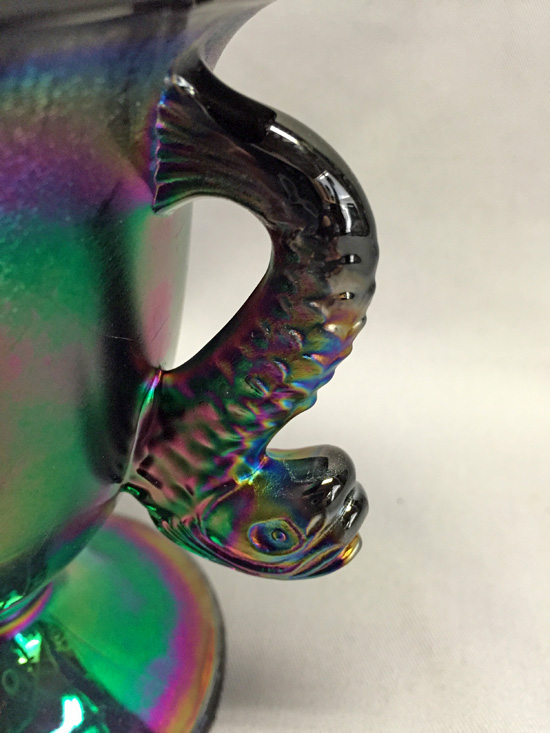 In 1997 the souvenir was a double dolphin comport which had a round flared top made in black glass. This was made from the mold which Fenton used to make comports, candy jars (with a top added) and fan vases. These had wonderful stretch affect and were very popular. Fenton made a number of whimseys in many shapes. 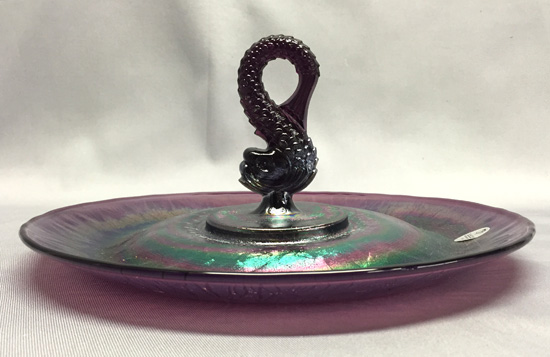 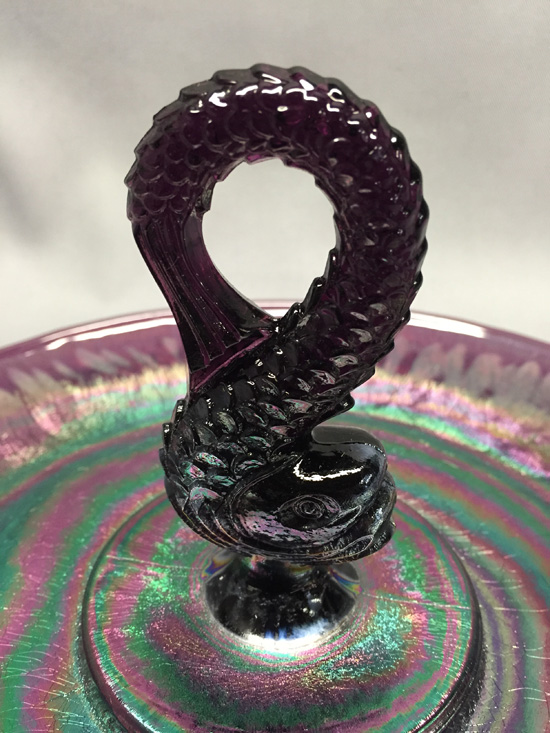 The 1998 SGS Souvenir was a deep amethyst dolphin center handled server. It was the most difficult of all the souvenirs to make and, as a result, only a limited quantity were ever made. These were made from the original dolphin handled server mold used during the early stretch production (and in the years to follow when non-iridized dolphin handled servers were made). The thick, solid glass dolphin handle proved to be a challenge to cool and many of them exploded in the lehr. We had to ration the first quality souvenirs because we did not have enough of them to fill all the orders from members. We purchased a number of the second quality ones from Fenton and these were quickly purchased by our members as there was no appreciable difference with the first quality ones. 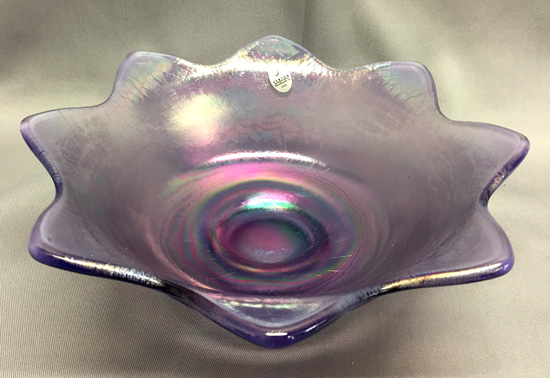 In 1999 we took a break from the dolphin motif and Fenton made a flared petal bowl in Violet for us. Violet was a color being made by Fenton at the time for their line of late period stretch glass. The petal bowl was a practical, useable shape designed to appeal not only to collectors but to those who were using their stretch glass for entertaining. This bowl souvenir was marked for the 25th Anniversary of The Stretch Glass Society. A few whimseys were made including a basket and a cupped in petal bowl.

The Stretch Glass Society always tried to produce a souvenir which was both collectible and practical to use as we knew many of our members enjoyed using their stretch glass when entertaining in their homes. We also felt it was good to encourage the use of stretch glass as a way of promoting it and encouraging others to become interested in stretch glass. You will see this trend of useable and collectible souvenirs continue next Tuesday when we pick up with the 2000 Stretch Glass Society souvenir.