It seems to be the first Tuesday of August, so that means that the BugDoc has a Stretch Tuesday! Fortunately, the Stretch Glass Society, like many of the glass collecting groups has had souvenirs made, especially in the 1990s and early 2000s when Fenton was making stretch glass! I remember when Renée and I had been club members for a few years and we had moved up to being co-presidents. Frank Fenton called Berry Wiggins, asking him if the SGS wanted a club piece to be made and Berry had him contact us. The board quickly responded with a resounding “YES!” Off we went to the factory, not knowing what to expect as we had only taken some brief tours of the Fenton Factory but not while they were making stretch glass. We met Frank at his office and he soon took us down to the factory floor as the “turn” was about to start. We had agreed to have them make a twin-dolphin ruby stretch item. The two molds were quickly warmed in and we soon were able to see the first couple of pieces. We saw some flared ones and a fan vase. We quickly approved of the fan vase shape and effect. After a few minutes of the workers cranking out vases every few minutes. Frank suggested that we go to lunch and come back after the vases had time to run through the lehr. We eagerly returned as several boxes of the vases had already come through the lehr, had been inspected and were being placed into trays that would go into Frank’s “cage.” A locked wire-walled room where “special” glass was stored for various clubs or contractors. We were delighted with what we saw and were amazed at the variations that we saw in the iridescence. 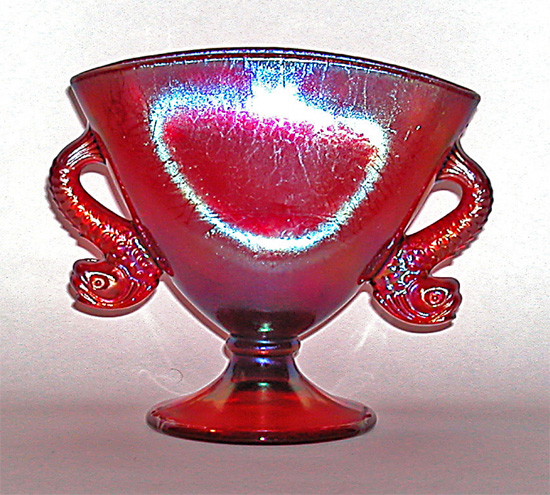 We approved of all the first quality pieces and when I pointed out that one had a flaw, Frank threw it into a barrel where it shattered! We soon learned that, perhaps, some flaws weren’t that serious! LOL! The club pieces were marked on the bottom with Frank’s signature and “SGS – 1994.” 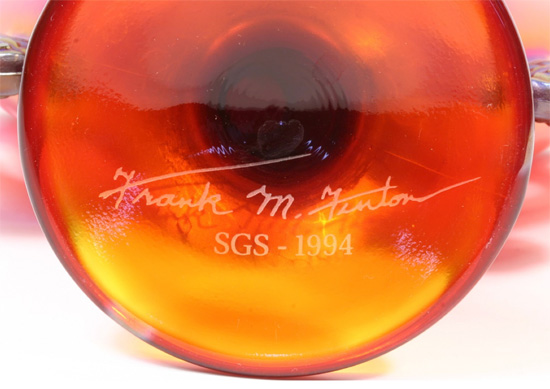 In the fall of 1995, Frank asked us if we would like another club piece as they were making some cobalt blue pieces at the time. These would be for our 1996 meeting. Of course, we agreed! This time we decided on a square shape and after making some pieces, Frank stated that they also had some ebony glass in a tank and would we like them to make some whimsies with that glass. Sure! Soon they were “torturing” the glass in as many ways as Frank could suggest to the finishers – crimped, flattened down, swung, Jack-in-the-pulpit, etc. Glass was going into the lehr at a mind-blowing rate. Soon, Frank said “enough” and the crew went back to making our club pieces. By this time, we knew of the routine and again went to lunch as it would be several hours for the pieces to pass through the lehr and we could inspect them as they came out! As we rushed back to the factory after lunch and hitting a couple of local antique shops, we got to the inspection and sorting room as the first club pieces were coming out of the lehr. The club pieces were great with fantastic, multi-color stretch, but then we spotted the whimsies, or what was left of them! Because of the extreme stress put on the glass, the short lehr time wasn’t sufficient to relieve the internal stresses and most “exploded” or simply broke into two or more pieces. We were heart broken, but delighted that the club pieces were coming out great. So here is the cobalt blue club piece: 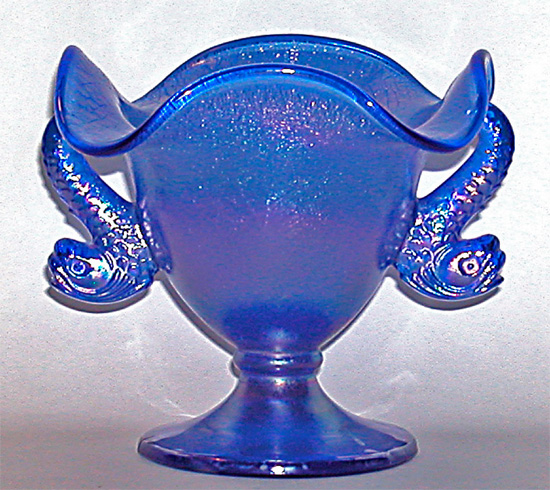 And here are some of the whimsies that made it through the lehr! 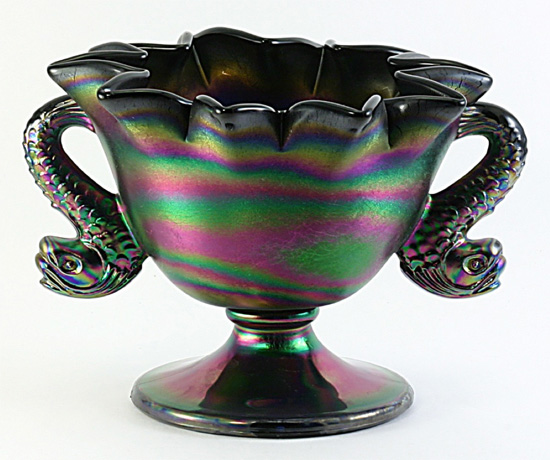 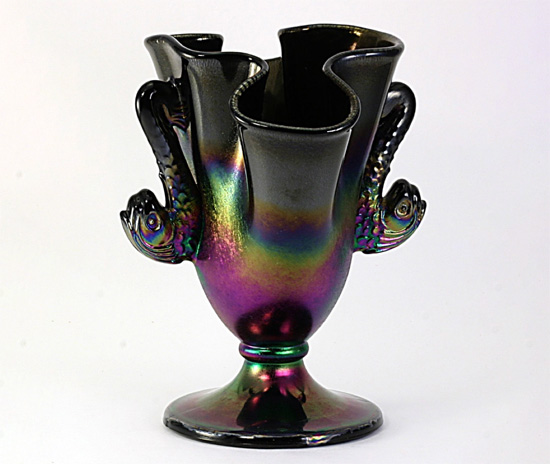 The whimsies were sold to club members through raffles and special sales, so if you see one of these, they are truly one of a kind items!!

It wasn’t until we started having some these club items being made, that we realized that the club had other items made previously. One of our members came in with these club pieces and I was able to document most of the previous club pieces. All were iridized but only one had the stretch effect! Again, these are very difficult to find as they tend to remain in SGS member’s collections and are handed down, member to member. 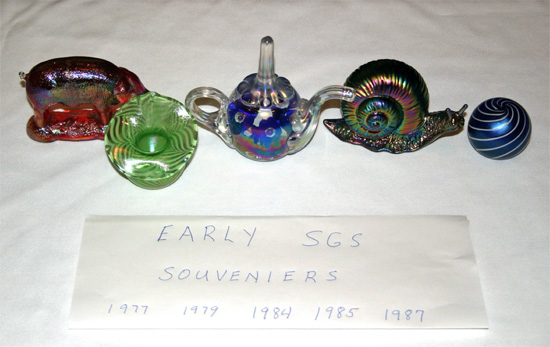 I hope that Cal will be able to show some of the other pieces made in the 1990s and early 2000s. If I have time, I’ll show some of the first pieces that Fenton made for the SGS members as they were re-learning how to make stretch glass in 1975.