Cal here, WOW is the word when it comes to tumblers. The patterns, the colors, the iridescence, the variety….amazing. And thanks to those who have chimed in with something from the stretch glass era….we love to hear about what you are finding or have in your cabinets. I would say stretch glass tumblers contrast nicely with carnival glass tumblers – precisely as was intended, btw – with the exception of color. Some of you have heard my comments about the designer influence on everything including glassware as the Arts & Crafts Movement took hold in the US in the 19-teens. Out was the popularity of gold and silver covered whatever (furniture, china, glassware) and in was defined as emphasizing the workmanship and the basic materials used to produce furniture, glassware, china, etc. Stretch glass is a wonderful example of what the Arts & Crafts designers had in mind. It is glass, often completely unadorned by pattern or design, iridized but not to the extent that it blocks out the color of the glass and it certainly emphasizes the workmanship of the glass pressers, finishers, etc. Let's look at some tumblers which were made during the early stretch glass period, roughly defined as 1912 through the mid-1930's. (For our detail-oriented readers, you will note that I am routinely using 1912 as the beginning of the early stretch glass era rather than 1916, as I did for several years. It was in 1912 that Imperial introduced their ‘crizzled' lamp shades, which are today classified as stretch glass and so it is this earlier date that I should have been using all along. Thanks to repeated reminders from Gary Senkar (Mr. Imperial Jewels, to most of us), I have finally gotten with the program and am using the correct beginning date for the early period of stretch glass production.) Ok, enough history and theory, let's see some stretch glass tumblers.

Diamond produced some unadorned tumblers including these in an hourglass shape, a classic shape that Fenton also produced. Diamond also made these ‘narrow panel' tumblers which have a matching pitcher which in turn has a lid (tougher to find than the pitcher). 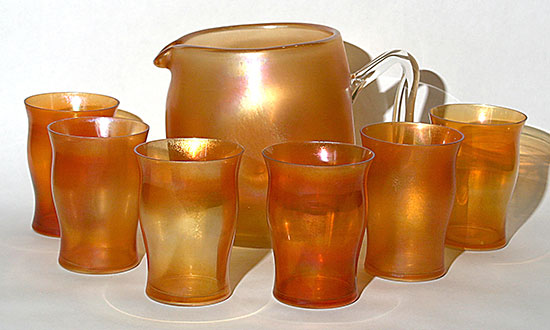 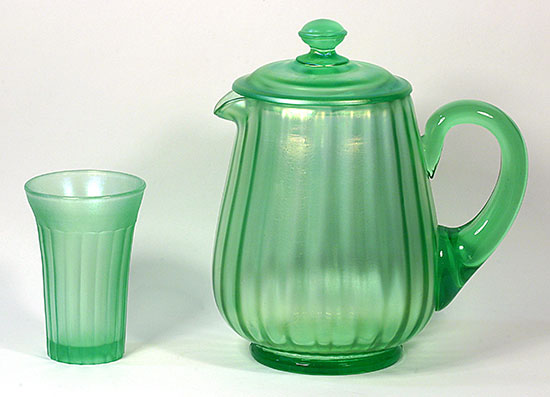 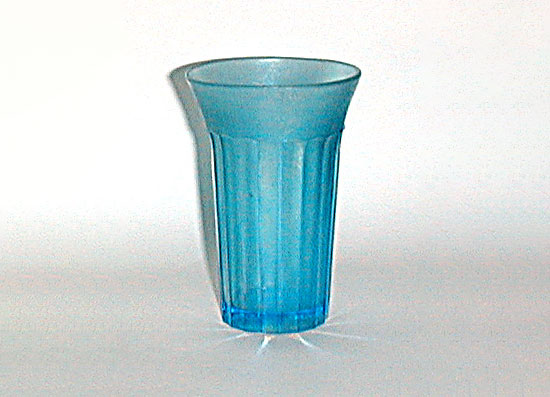 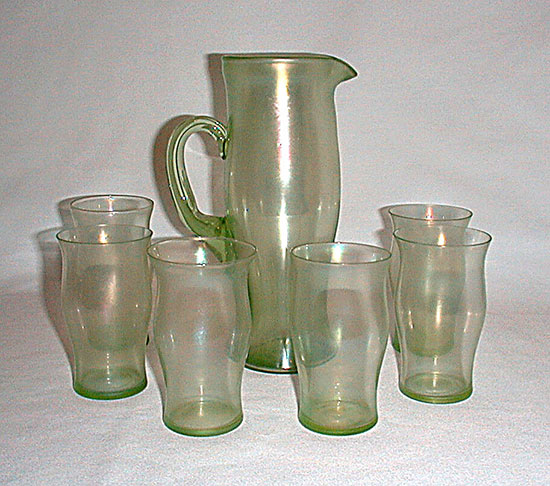 Fenton produced a number of tumblers, some more easily found today than others. The nice thing about tumblers is that they don’t need a lot of explanation, so let's just look at the photos. 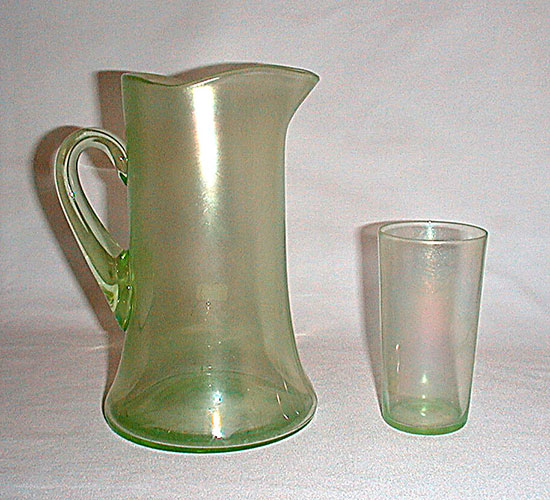 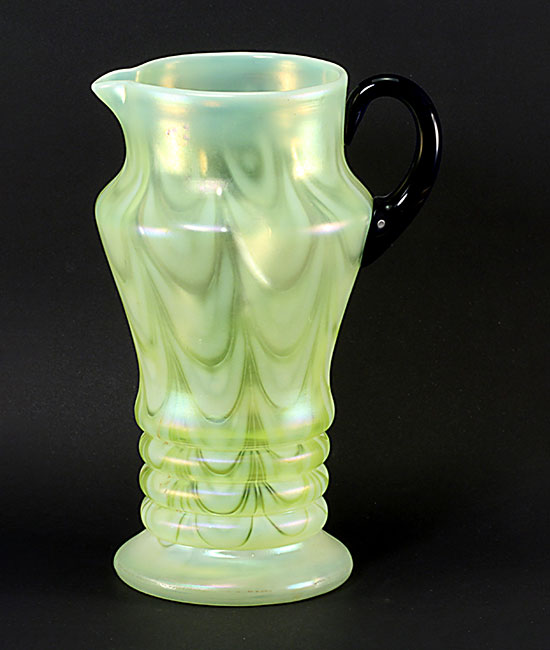 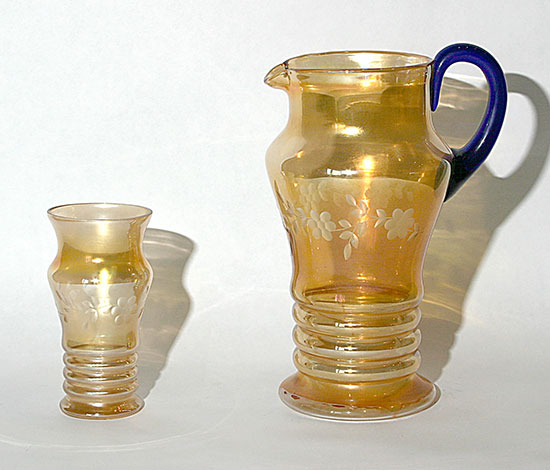 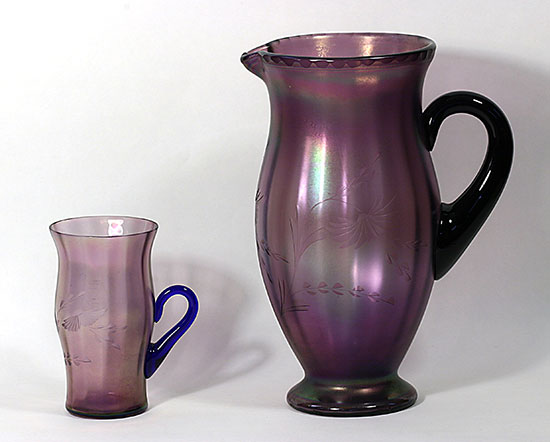 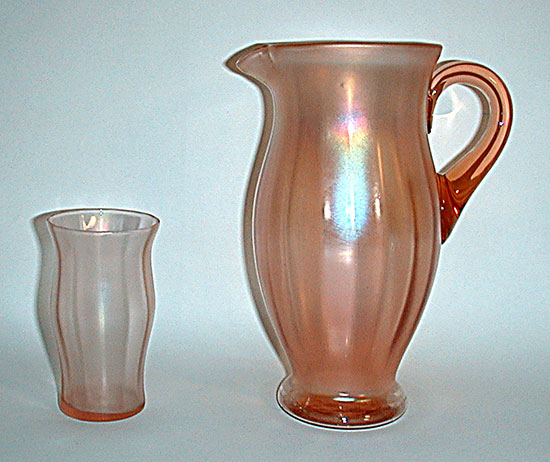 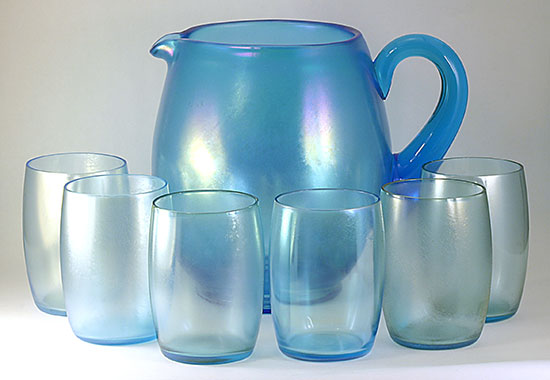 As you can see, Fenton produced tumblers in other than hourglass shapes. Some were straight-sided, others were ‘barrel-shaped' and still others had concentric rings at the base. Fenton's tumblers range in size from juice glasses to lemonade and iced tea tumblers/handled tumblers or mugs. All handles are attached rather than molded. Some tumblers were wheel etched and the number of designs continues to increase as more of them are discovered. I know of 5 or 6 wheel etched designs at this point.

One thing to keep in mind about stretch glass tumblers, as with carnival glass tumblers, is that not all colors are equally available. In stretch glass, Velva Rose tumblers are among the more difficult to find. I am not aware of a single Velva Rose handled tumbler, for example. As far as I know, only the hour glass shape tumbler is known in Velva Rose, even though both the hour glass (taller) pitcher and the ‘squatty' (bulbous) pitcher are known in this color. Wistaria is another tougher color to find. Here most of the tumblers you will find are going to have handles, usually cobalt. Of course, the curtain and rib optic topaz tumblers are hard to find in any size. If you should find a curtain optic or a rib optic tumbler in a color other than topaz, that would be a real find!

I'm only going to briefly mention the Imperial “Chesterfield” and Northwood “Expanded Diamond” tumblers because I know most of our readers are well acquainted with these tumblers, which often are found in carnival glass collections, including Bob Smith's collection. Chesterfield tumblers are known in several colors including Blue Ice or smoke, which is probably the hardest of the colors to find but the Ruby Ice or Red typically command the highest prices. Interestingly enough, I did not spot a Chesterfield Blue Ice tumbler in Bob's collection. In Expanded Diamond, the tumbler and pitcher are known in blue, topaz and Russet. Russet is the more difficult one to find by far and here is a photo of both the pitcher and the tumbler. 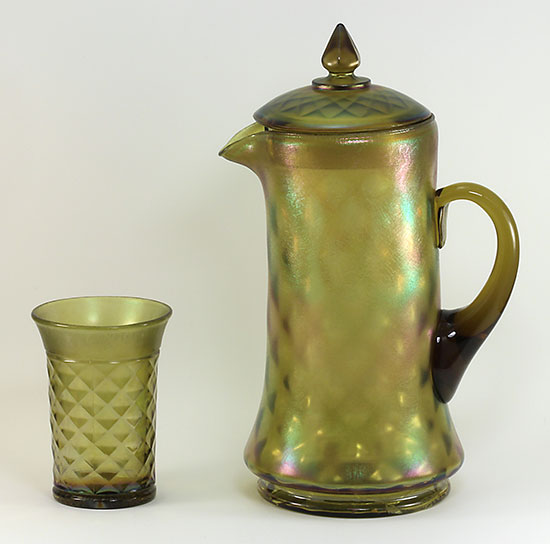 Topaz is also challenging, but complete sets do exist like this one. 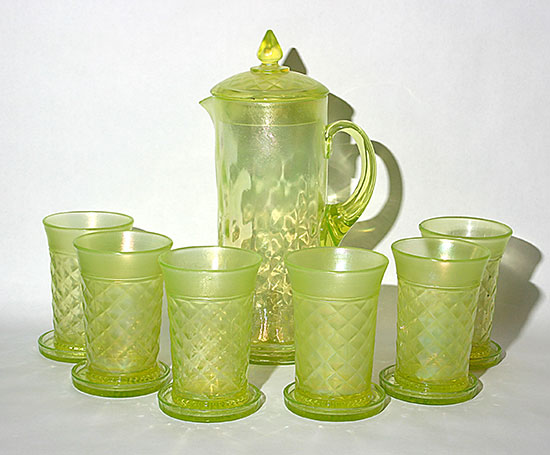 Blue is more easily found and assembled into a complete set, including the cover for the pitcher and the coasters. Northwood also produced “Barbella” in topaz and Russet; I'm not aware of it being found in blue, but it could exist. Here is the tumbler in Russet. 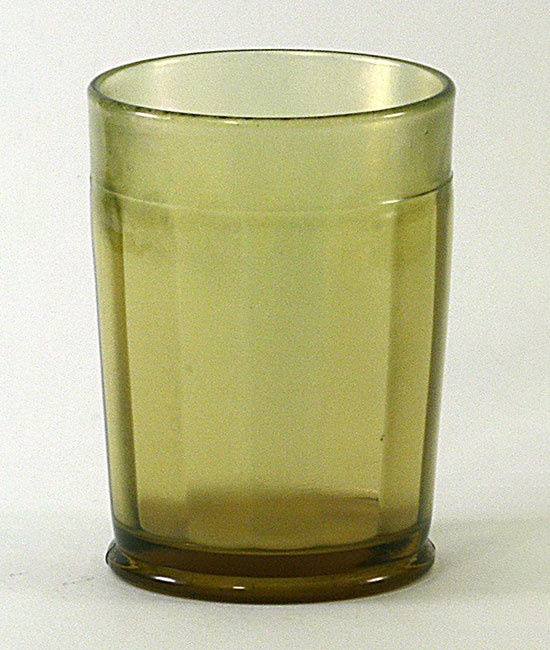 That should do it for today. Maybe you have some other stretch glass tumblers you would like to share with us; we would love to see them.