It’s the first Tuesday of June already, so it’s supposed to be a Stretch Tuesday! BugDoc Dave here with my contribution to this month’s theme – tumblers! As far as we can tell, only the major companies made drinking, guest or night sets in stretch that had a tumbler. In order to leave Cal something for later this month, I’ll only cover the guest sets (called bedroom sets by Northwood) in which a tumbler fits inside the top of a pitcher and night sets (also called tumble-ups) which have a small carafe and a tumbler that fits over the opening. As far as we can tell, only Fenton and Northwood made the guest sets, but many companies made tumble-ups. However, only Fenton seems to have made tumble-ups in their stretch colors. I know of iridized tumble-ups made by Imperial, but all are in their shiny iridescent colors.

My first ones will be the Fenton #401 tumble-up sets. These come in most of their Florentine Line stretch colors. Since they are supposed to come as sets, I’m not going to just show the tumblers. The first one is a set in Persian Pearl and what makes this set special is the blue enamel decoration. This decoration occurs on other Fenton pieces and it is quite elegant! 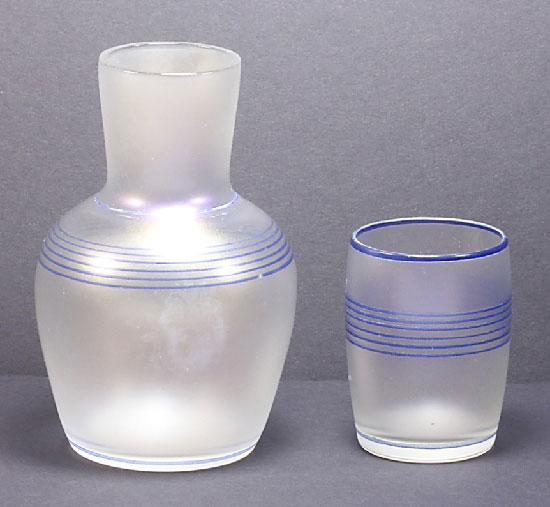 And here are the Celeste Blue and Velva Rose examples.

And Florentine Green and Topaz. 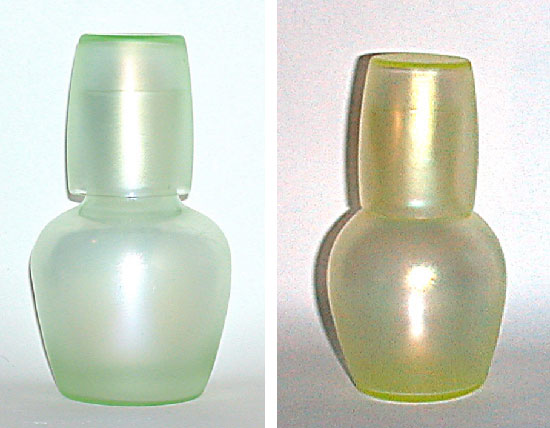 The really tough ones to find are Tangerine and Wistaria (not shown). 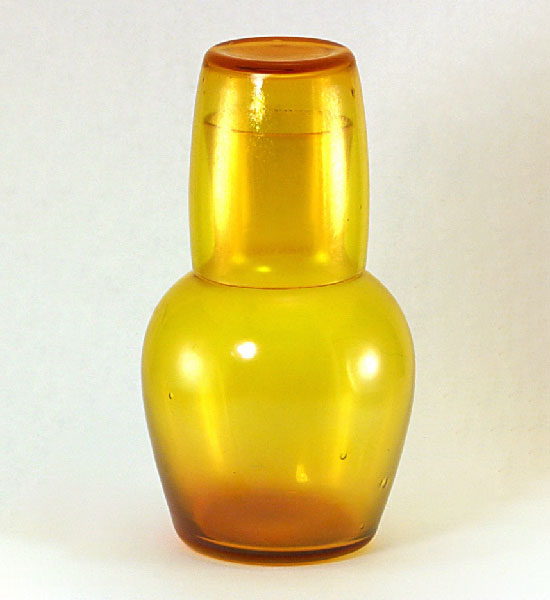 Late in their original stretch production period, Fenton also made some tumble-ups that have rings in the base. These are really tough to find in stretch and I only have an example of the Celeste Blue set. 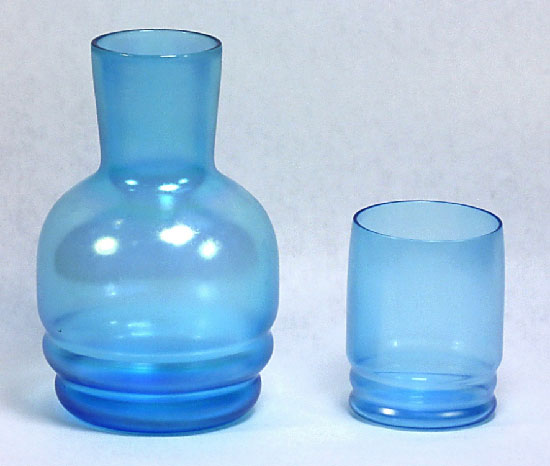 This same set comes with the #1502 diamond optic pattern. Again, these are extremely rare and I only have an image of a Velva Rose set. The optic pattern is difficult to see in the image. 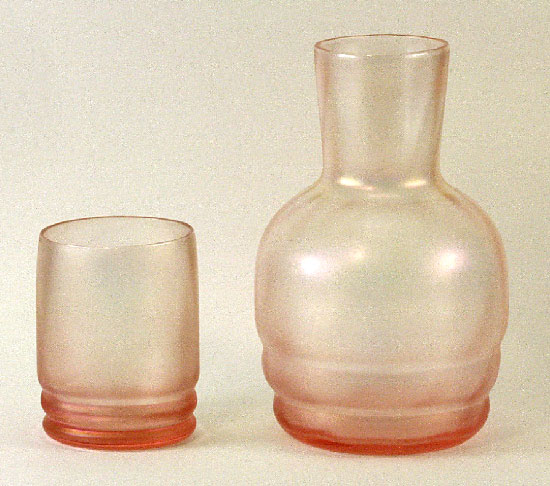 Next, I’ll cover the guest sets. These have a handled pitcher with a tumbler that fits in the opening of the pitcher. All of Northwood’s have diamond optic interiors for the pitcher, but an external diamond pattern on the tumblers. These only come in Blue, Topaz, Jade Blue (blue opaque), and Russet. Here is a Topaz example. 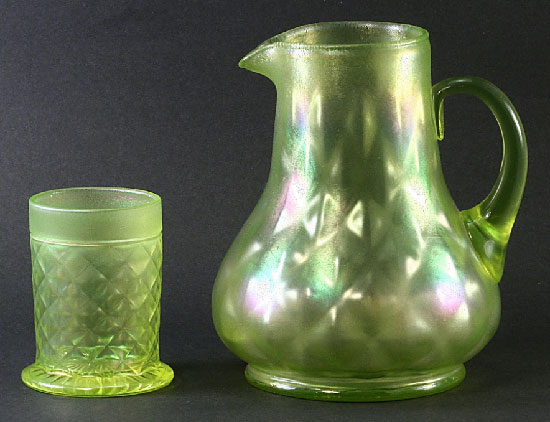 And a tougher to find Jade Blue set. 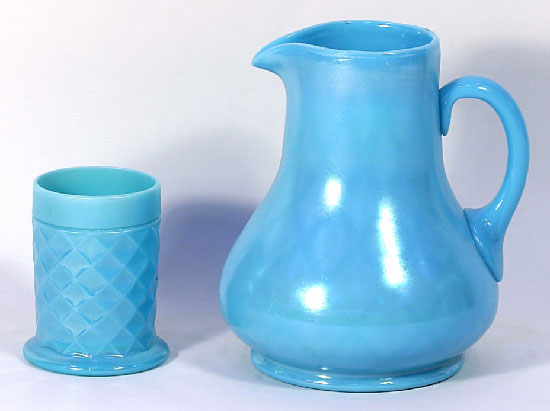 The Fenton #200 guest sets have optic ribs in the pitcher and tumbler. The pitcher often has a contrasting handle color, but some have the handles made with the same color of glass as the pitcher. Here is an example in Celeste Blue with a cobalt handle. 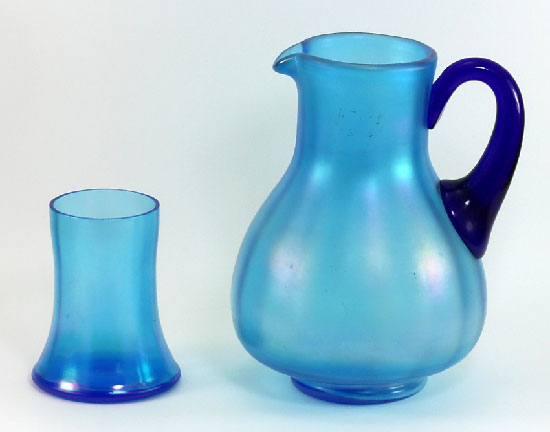 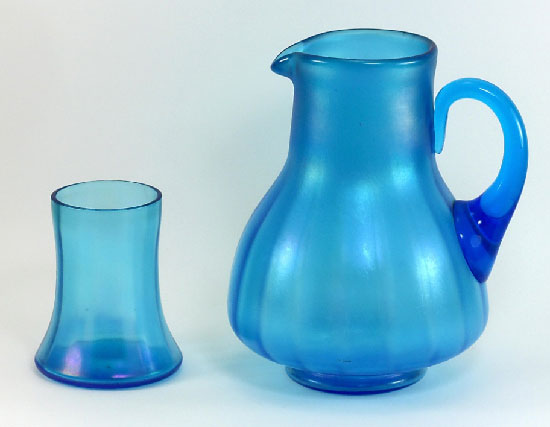 These guest sets most commonly come in Celeste Blue, Florentine Green, Persian Pearl, Velva Rose and Tangerine. The tough one to get is Wisteria. 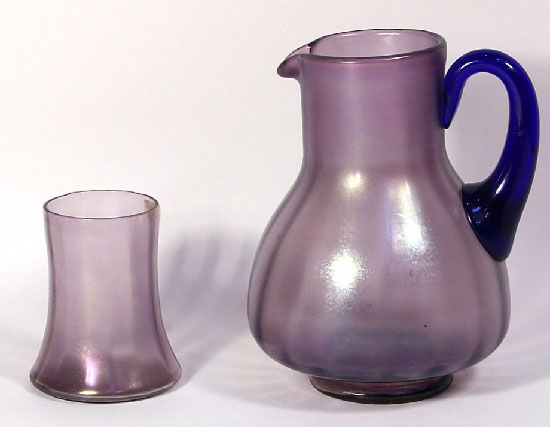 However, the Tangerine ones are always prized by collectors. This one has an especially dark color in the pitcher. 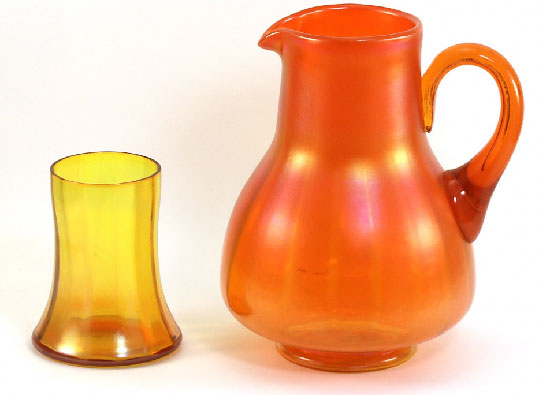 Grecian Gold is also fairly common, and many have cuttings on the pitcher. 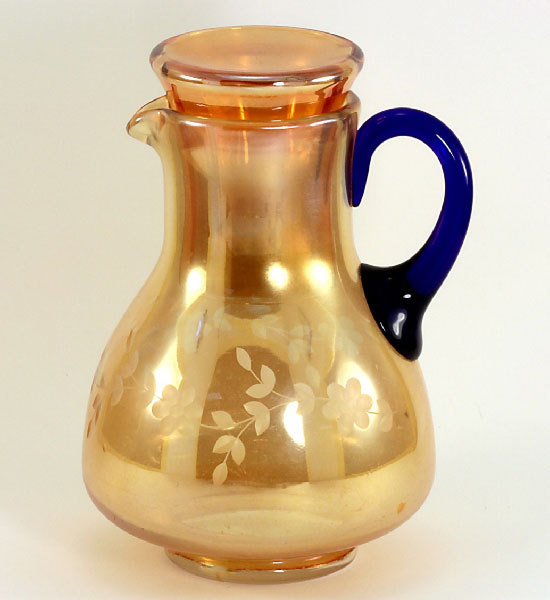