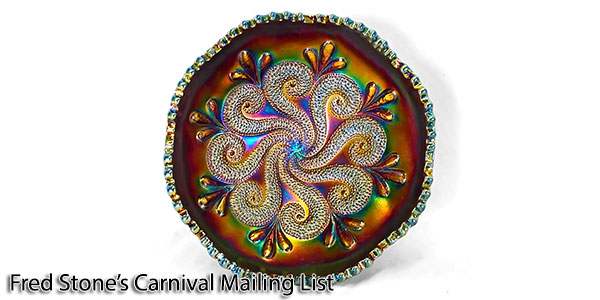 BugDoc Dave here with tonight’s Tuesday Stretch! I’ve been reading with interest the recent discussion about stolen carnival glass that ended up on eBay. People who think they have a right to other people’s property amaze me! Tonight I want to cover another form of robbery, fakery of new glass as being old glass. Over the years, I’ve seen lots of stretch glass, especially pieces that have a tiny ground marie (which looks a lot like a pontil mark) with fake “LCT” scratched in the ground area, and I’ve even seen one plate with a fake Steuben mark that was acid etched! I’ve had several recent inquiries about some “great stretch glass” that folks have found, but the bottoms appear to have a ground pontil mark! These pieces often come in ruby, dark cobalt blue, emerald green and amber. The stretch effect is strong and impressive. Unfortunately, all these pieces are modern art glass pieces made in the 1970s through the 1990s and possibly even more recently. I’m attaching a wholesale flier produced by one of the New York distributors of this glass, Koscherak Brothers. 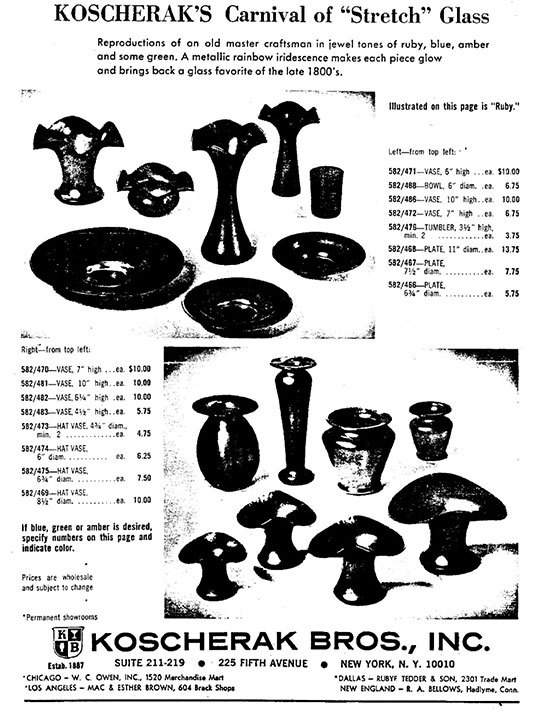 When most people see the glass in this flier, they do an “OMG” as we have all seen these distinctive forms in malls, shows and on internet sales platforms! And, look at the original wholesale prices! Even the large pieces were generally in the $10 range. I’ve seen these same pieces for hundreds of dollars with labels indicating that they are turn-of-the century (last turn!) production. Again, unscrupulous dealers often marked the pontils of these pieces with fake “LCT” marks. I’ve seen several with “LCT” and even a production number! However, most are marked with a diamond pin with a script or block letter, “Poschinger” though the spelling of this can be off by a letter or two! Some people doing research on this glass think that this marking may have been done by the factory workers as the glass company that was producing this glass can trace its history back to the original Poschinger Glassworks which started in the mid-1500s!! The factory that survived into the late 1800s and early 1900s was in full competition with the other art glass companies of Europe who were making high-end, usually iridized art glass. Bottom line, don’t be fooled by this glass, whether it is being represented as being old Poschinger or a type of stretch glass. I will buy pieces when they are reasonably priced, mainly for show. Here is one of the cobalt blue, two-side-up, vases. The color and stretch iridescence is fantastic! 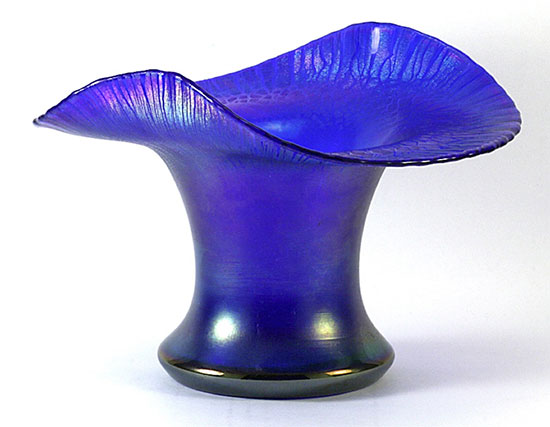 Here is another vase shape in ruby with the original “Golden Crown” paper label (these pieces often had “Golden Crown” or simply “Crown Glass” labels) and West Germany as the country of origin. I have to confess that I captured this image from an online seller’s posting. Even with the label, noticed the scratched “POSCHINGER” on the bottom. 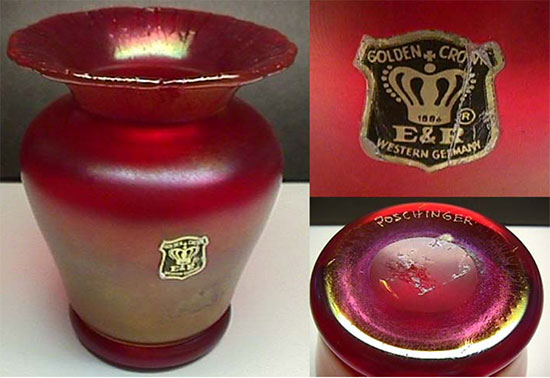 Below is a small cobalt blue plate that has a different paper sticker that simply states “Made West Germany.” 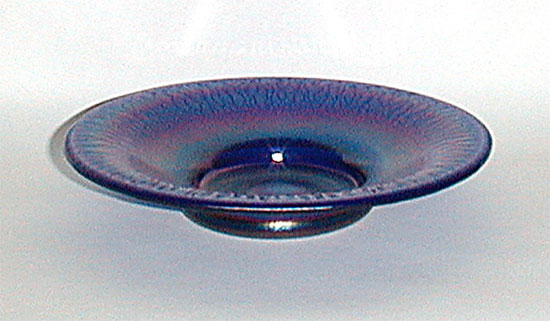 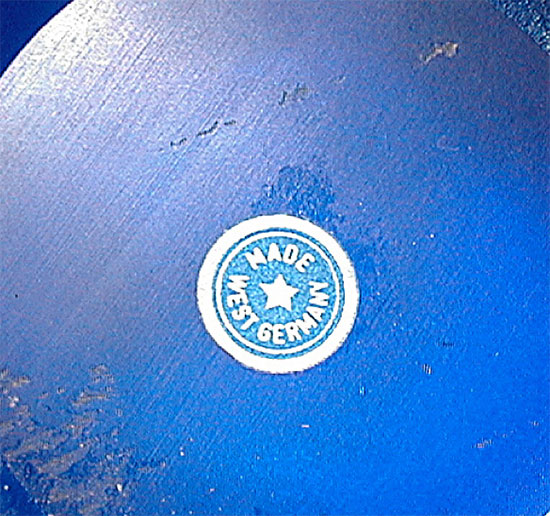 Beside the ruby and cobalt blue, amber is another common color. This particular vase isn’t figured in the early flier, but I’ve seen the pieces in ruby, cobalt blue and green, all with West Germany labels! This vase is the one most commonly marked “LCT” in the bottom by fakers! Pieces with these marks are often priced in the $500 to $600 range!! 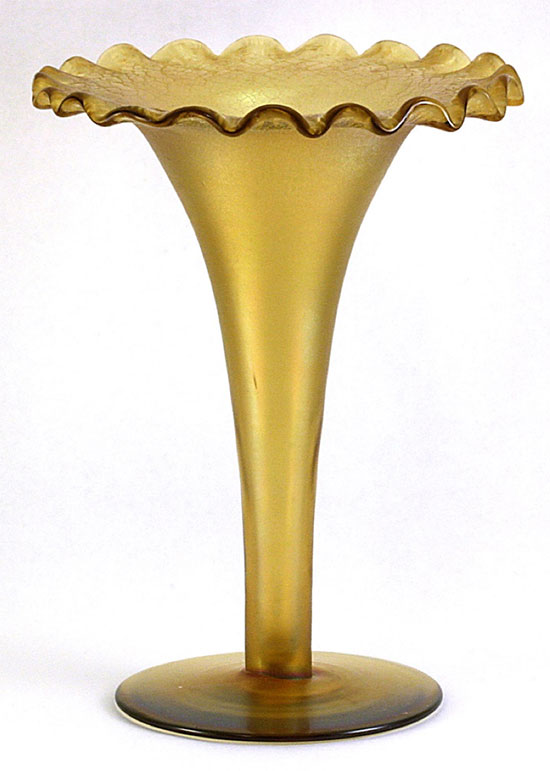 Not all the cobalt blue pieces are really dark! I think that some later production used a lighter cobalt blue batch as seen in this spittoon-shaped, crimped top vase! 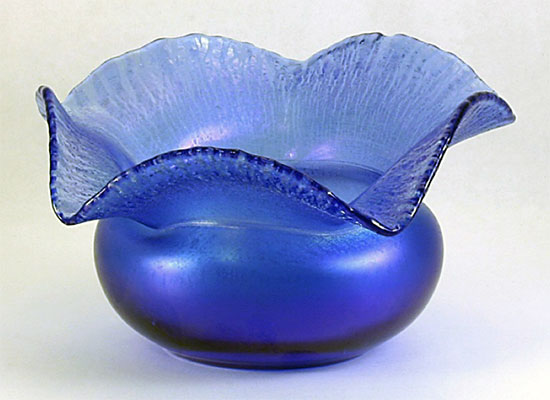 Finally, notice in the flier that there is a tumbler figured. This piece is really confusing to collectors as it is a blown-molded piece with a ground top and no pontil. I see these most commonly in ruby and cobalt blue, but a few emerald green ones are out there. 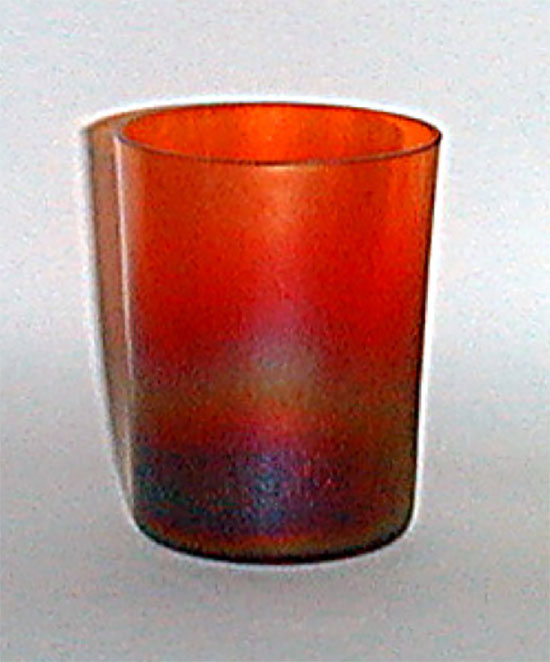