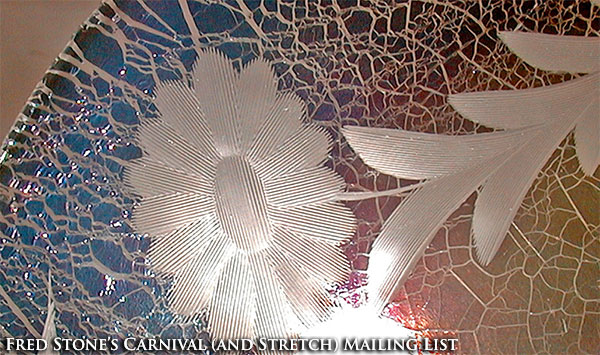 I just got back from Oklahoma and caught up on the HOC listings for the last week. I really loved the California carnival display on smoking items! Lot of stretch glass in that display! And, you guessed it, it’s Tuesday Stretch time and BugDoc Dave’s turn! The Stretch Glass Society has a monthly Stretch-Out phone conversation and we have been alternating between early production stretch glass (the items made from 1916 into the mid-1930s) and late production stretch glass (mainly Fenton from the 1970s until Fenton closed their factory in 2011. I mention this because Julie DeMary asked if the new pitchers were marked. We discuss the marking of the late production stretch glass in detail during our discussions, so if you want more information, feel free to join us. The April 12 Stretch-Out Call will discuss items made by Fenton for QVC and we’ll also talk about how these items were marked. For more information look at our web site at: https://www.stretchglasssociety.org/ (or see the next message.)

In the case of the late-period pitchers and tumblers, they were supposed to be marked, but because these items were blown-molded, the final shaping and finishing often left the logo mark indistinct or even missing entirely! However, if you hold an early period pitcher and tumbler compared to the late period pieces, you will immediately realize that the early period pieces are much thinner and lighter.

Tonight, I want to return to a topic of the March edition of the Stretch Glass Society Newsletter – handled servers. I had illustrated all the types of handled servers quite a while ago, but I didn’t have space to cover all the decorations that Imperial used on their servers. Imperial had an in-house cutting shop and they were famous for their cut designs, usually floral. The cuttings were often polished on non-iridized glass but a gang wheel (leaves little lines in design) was often used on iridized pieces and on satin etched pieces. Several of the Imperial historians have combed through the existing Imperial catalogs and industry publications from the 1910s through the 1930s, and many cut patterns have been identified. Unfortunately, many of the patterns that ended up on the handled stretch servers don’t appear in the catalogs! The most common handled servers from Imperial have a simple shovel-shaped handle and the plate portion can be flat (for sandwiches or tidbits) or raised up into a fruit tray. The same cutting can occur on both the flat and fruit tray forms. The cutting can also be made on items in Iris Ice (crystal), Rose Ice (marigold) and Blue Ice (what we would call smoke today). I’m not going to show the Iris Ice items with cuttings as the patterns virtually disappear when photographed!

Without a doubt, the most easily identified cutting is the #12 which collectors often call “balloons.” This cutting also occurs on iridized vases and stretch glass mayos and plates. 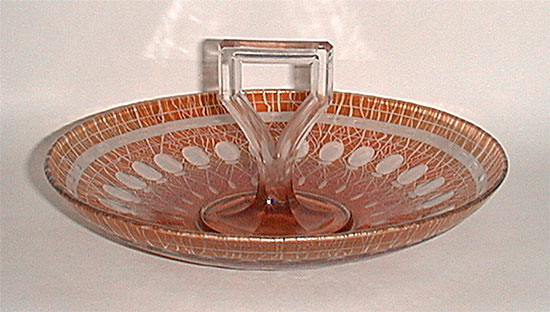 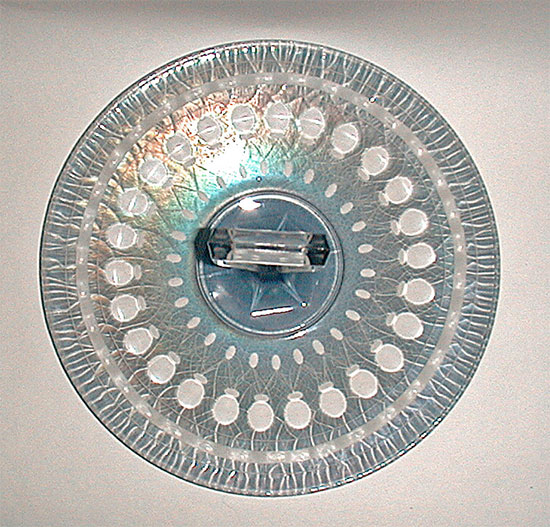 Another cutting that we know is the #30 which consists of a series of daisy-like flower cuttings with two ball-shaped cuttings between each flower, around the outer rim of the plate. I’m unaware of a common name for this pattern. 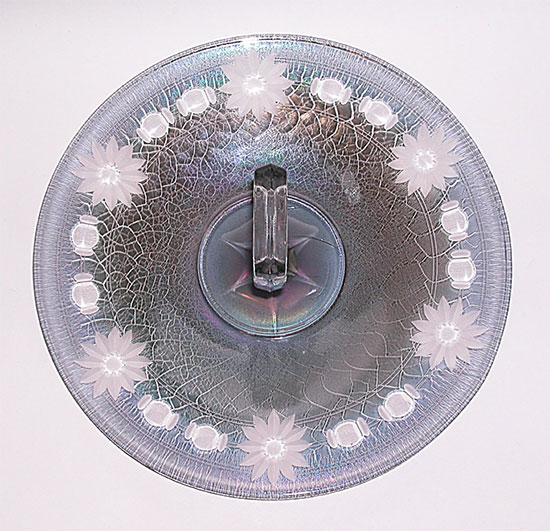 An unidentified cutting number is one that I have dubbed “Fuchsia” because the flowers have the distinctive stamens of this flower. 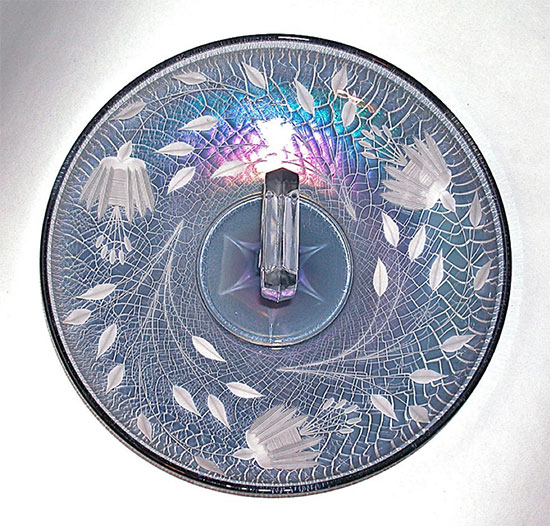 The next great floral design reminds me of a chrysanthemum flower, so that’s what I usually call the pattern! 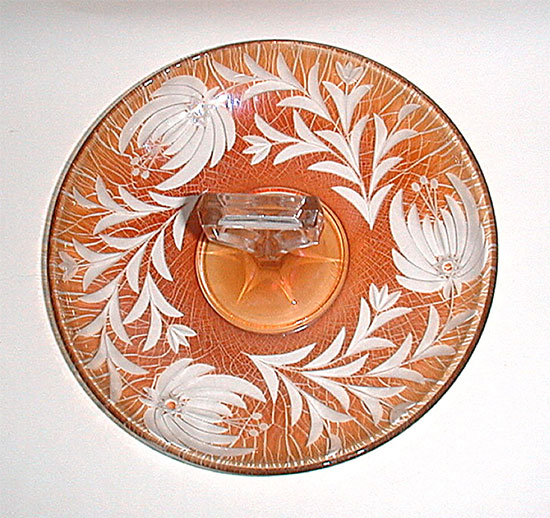 The next one I’ve dubbed triangle daisy for obvious reasons! LOL! 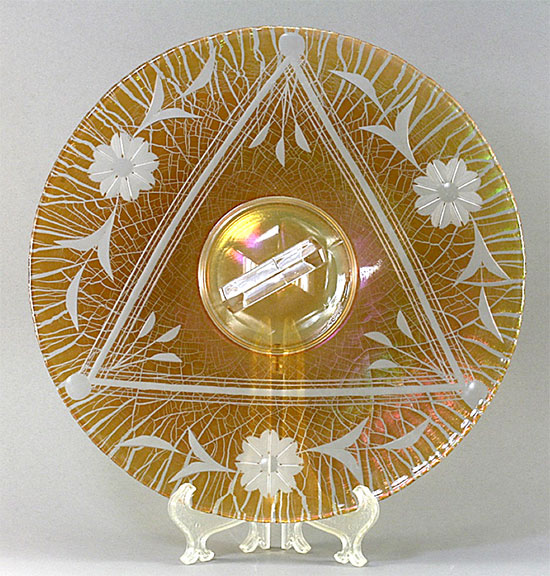 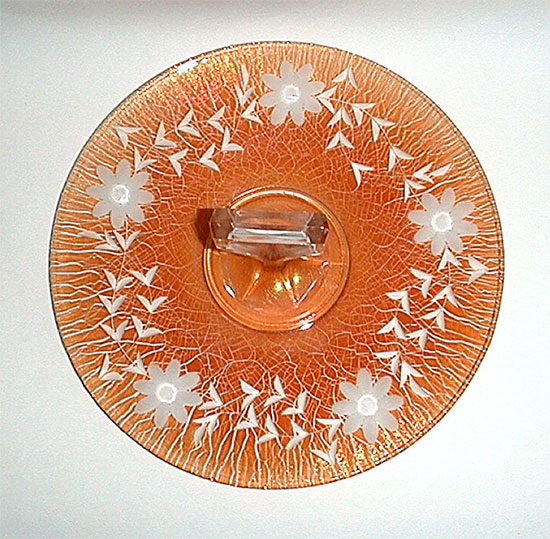 A tougher pattern is one of the BugDoc’s favorite as it has three moth motifs within a basket-weave like cutting and leaf cuttings. And, yes, the moths have antennae! 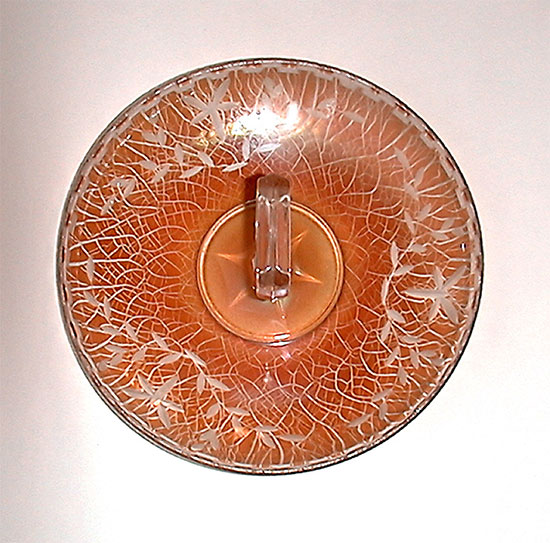 Finally, here is a really tough pattern to obtain! It appears to be four large daisies on leaf stems. 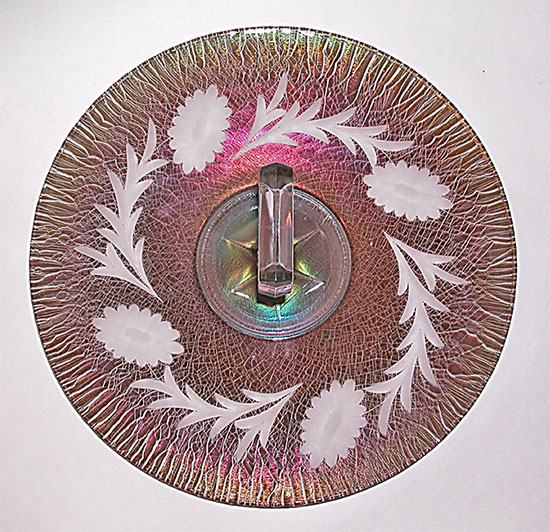 At one time, I thought that pattern was unique until I found the following one! Notice the subtle difference in the flower stems!! Was the cutter simply experimenting? 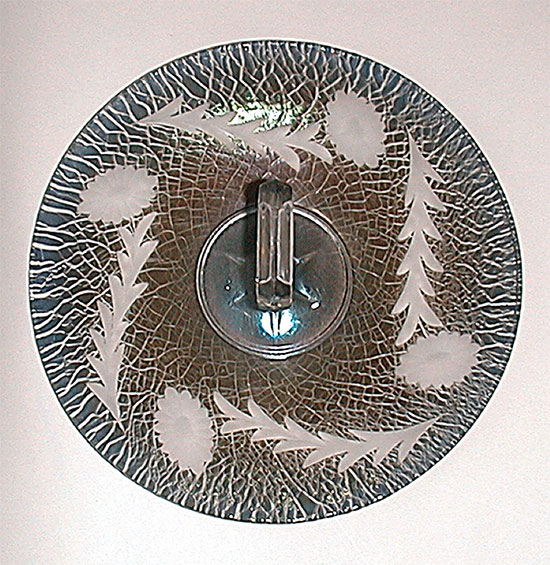 I suspect that there may be additional cuttings out there, so if any of you have something different than what I have shown, I’d really like to hear about it and see a picture!