Russell and Kitty here. Friday night Brian posed an interesting question: “the artistry achieved by the glass makers in a factory system. If you think about it, mass production and artistry are two concepts that are almost always mutually exclusive.”

Yes Brian, the makers of pressed iridescent glass in the teens and twenties were able to produce pressed glass pieces in a basic mold which would mean that a number of similar pieces could be made quickly as opposed to the greater options available when entirely blown and hand shaped (i.e., art glass). Our beloved pressed iridescent glass had a number of skilled craftsmen handling the glass after it came out of the mold. In very simple terms, most of today’s glass factories, are so automated that no human touches the glass until the piece is made and has passed by quality control (hopefully) people. It is just too expensive (at least that is the excuse) to hire a lot of experienced glass handlers (i.e., skilled people).

Basically the molten glass is poured into a mold and pressed to a basic shape. After being released from the mold the magic begins. Most molds are in a simple bowl or vase shape. The pressed glass then is taken to the finisher. He decides what the final shape will be anything from a sung vase to a flat plate. Yes the swung vases are made by the man called a ‘swinger.’ First time, we went through the Fenton factory back in the sixties (and we were from San Francisco), we had a different definition of a swinger. But those men were true artists. Look at all of our beautiful and graceful old vases; then look at the vases made today, there is a world of difference! The finishers sitting on their wooden benches were also artists, taking the bowls and running an applewood, flat finishing tool around the edge of a bowl to make it into a plate or flared bowl. After the plate or bowl is initially shaped, they may put it into a crimper (usually a hinged metal apparatus) to make a ribbon edge, 3 in 1 edge, ruffled edge, or maybe just a plain flat edge. Then another worker takes the still hot plate or bowl and “dopes” it (there are different dope sprays with the different mixes of the metallic salts that produce the varied iridescent colors). These metallic salts, sprayed on the piece makes the shiny or slightly satiny carnival glass. If they are making stretch glass, they reheat the doped piece (which can melt the pattern if the temperatures are too hot) to make the glass expand for the stretch glass finish. If the piece of carnival glass is too hot, the metallic finish that was just sprayed on will contract (carnival glass with a stretch finish around the edge) and can even melt the pattern. The finisher is the key person on pressed iridescent glass.

All of the glass companies that we interviewed let their employees on their off hours make presents for their families using the materials and batches of glass that were used that day. If the piece caught the foreman’s eye, he would take the piece when finished to the Big Boss. If the Big Boss decided the piece would sell well in production, the employee would get a bonus. A couple of times when we were traveling in the Ohio area, we visited Richard and Wilma Ross (they wrote the Imperial Glass Book). Richard’s father worked for the Imperial Glass Company. We loved his accounts about Imperial. He showed us a number of items that he had made for the family which included lots of beautiful glass for his then deceased wife. He allowed us to purchase two pieces that were very special to him. We treasure these pieces and the stories that go along with them. The first piece is an Imperial marigold vase with an unfinished base. He just didn’t have time to grind the base down, and it since it sits flat, why spend the extra time?! There are no chips on the base, but lots of tiny pieces of glass; you could cut your finger touching the rim of the base. The one label on the base is Mr. Ross.’ The other label is our inventory number. The second picture is the vase. The next picture is of a variety of shapes that were made from the same mold (these are Imperial’s Art Glass Line or what we call “Jewels” today). Look at the variety of shapes and tell us that the finisher was not a skilled craftsperson with a keen artistic eye! The next picture is another piece that Mr. Ross made for someone, but the boss thought that this idea of iridescence on a white opaque glass (commonly called milk glass) with a charcoal finish was worthy of a big bonus. So worthy that within the year, they were iridizing white opaque with not only charcoal iridescence but also marigold iridescence. These pieces are prized pieces today as they didn’t make that many pieces. 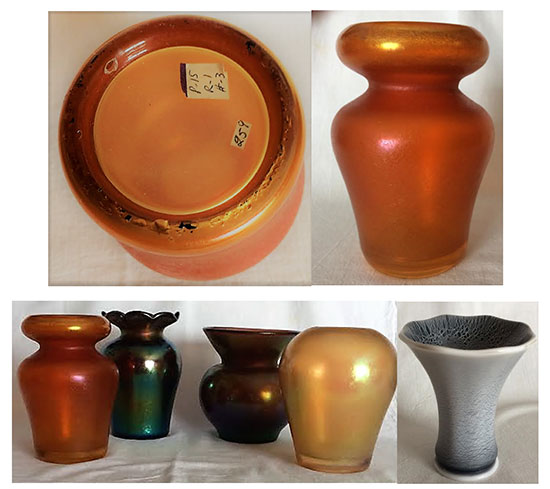 While we are talking about Imperial pieces, we’re including two Chesterfield compotes as prime examples of variations of the same mold. The red compote is probably how the glass came out of a mold though with a slightly flared rim. The white compote is out of the same (#44/50) mold, but the finisher made a scallop top. That finisher was an artist! 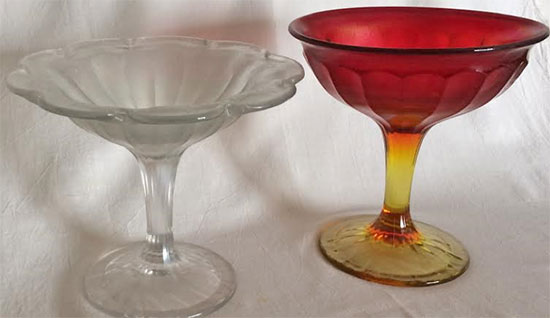 Imperial is not the only company that hired artists that were also finishers. Fenton also hired finishers that were artists. The orange “melon rib” bowl and vase are from the same mold #847. When we were doing our book, our camera man had pet names for many of the pieces of stretch. The fan vase, he called a cow bell. When you thump it; it sounds like a cow bell! When you thump true art glass it rings like a Church bell; it tells you how much lead is in the glass. Not much lead in the Fenton “cow bells!” 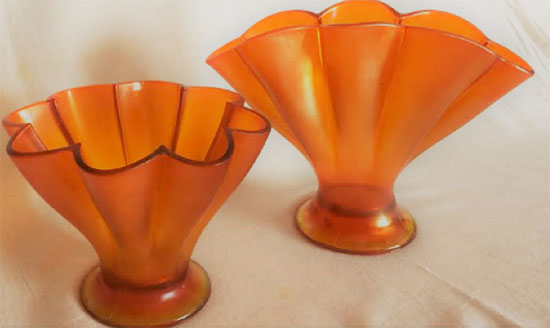 The second picture is of Fenton candlesticks #549. These colors together are pure art with a fun aria. The finisher took two pairs of candlesticks and mixed them up! That finisher was truly an artist! To accomplish this task, the bases of a Celeste and Topaz candlestick had to be carefully cut off and attached with a molten glass wafer to the other top! 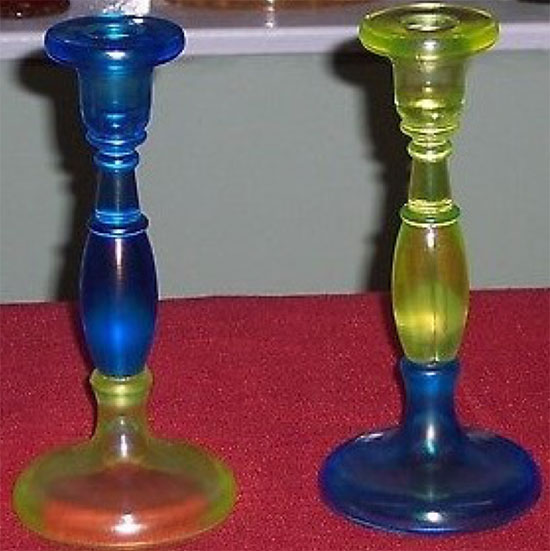 So yes Brian, we do have (or had) artists that work with the production of carnival and stretch glass. They produced most of what we call our ‘rarities’ (rarities are not always worth millions) today which include different colors found on normal patterned pieces, usual shapes including the spittoons in regular patterns, etc. Just look at your collections. We are sure you’ll see a number of different artistic pieces that are unusual in color, shape, iridescence, and/or even designs that differ from the usual. 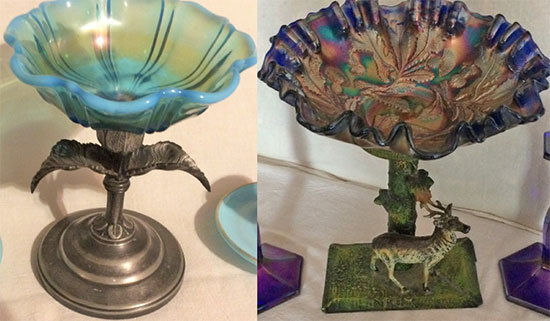 This small spittoon was made from a vase-molded piece and after shaping it was cut! Other spittoons were made using bowl-molded pieces. It took a real artist to pinch in and flair out a spittoon out of a bowl or vase! 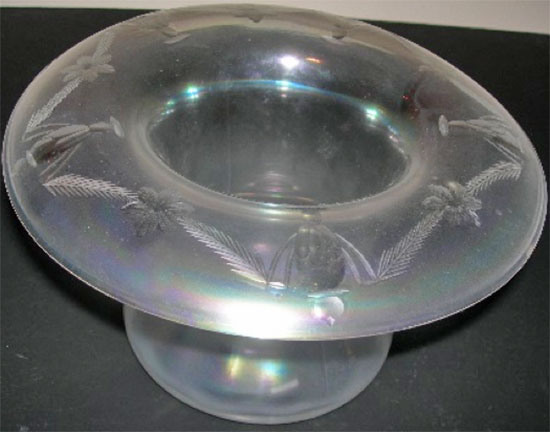