The Imperial Carnival Glass in this line was referred to in the same old catalog as “Bright Iridescent Colors”.  The colors are listed as:  “Peacock,- the glass has a very brilliant iridescence, but the effect is not loud, with every color of the rainbow represented, with golden yellow predominating, and many color variations; Rubygold ,- dark red iridescent glass with tints of other colors (on crystal glass); Nuruby,- very similar to Rubygold, but with a change of chemicals (on crystal glass); Saphire,- A dark blue-gray iridescent color on crystal glass;  Azur,– a very brilliant iridescent effect on a dark amethyst colored glass with all colors of the rainbow such as yellow, green, and rose combined in the treatment; Purple Glaze,- A very brilliant blue iridescent effect on dark amethyst glass with the effect being similar to that of the plain blue iridescence on the expensive lead luster glass; Helios,- a silvery iridescence on green glass.”

Imperial used numbers and colors to denote its glass.  In the Satin iridescent line (Stretch):  the eleven inch Heavy Grape cake plate #7007/4D was sold in Rose Ice, Blue Ice and Iris Ice. This particular group of three was sold as a lot #2079 consisting of 4½ dozen assorted plates in one barrel, 6 each of 3 plates in bright iridescent colors each in 3 satin iridescent colors.

The plates in “Bright Iridescent Colors” (Carnival) were given the same number designation but listed in Azur (dark Amethyst), Rubygold (Marigold), Helios (Green), and Peacock (Rainbow of colors) colors. 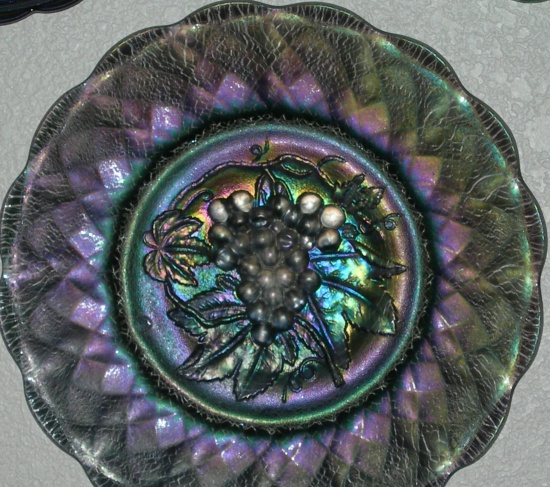 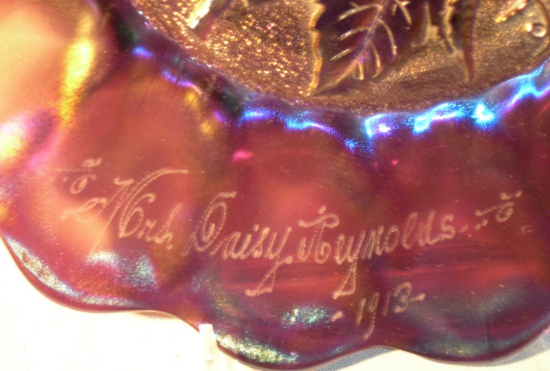 There is also a 7 ½” salad plate in the Heavy Grape Pattern in Azur (dark amethyst) and also in Rubygold (marigold).  But none have been found in the Satin Iridescent Colors (stretch glass).   Has anyone ever seen any? 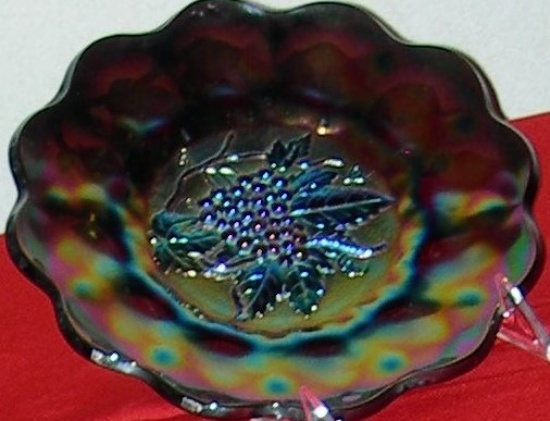 The Iris Ice Heavy Grape Plate comes both in a plain plate with a stretch finish and 5 are known to have a hole drilled in the top paneling of the plate.  They must have been drilled soon after the plates were made as the holes look professional.  We surmise that the holes were drilled so that salesmen could hang the plate on the wall.  The plates with the drilled holes were found in the early 1970’s in the Los Angeles area by Bill Carol. 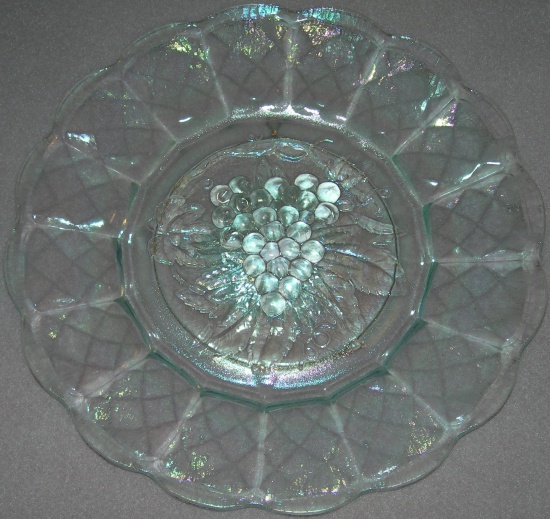 In the early 1970’s, the Fenton Art Glass Company had a line of “Heavy Grape” pieces mainly consisted of nappies and small pieces no plates.  We showed Frank Fenton a page of the old Imperial catalog with the Heavy Grape plate.  Fenton’s line of Heavy Grape was immediately discontinued.  All of the Fenton pieces were marked with an embossed Fenton in an oval on the base of the pieces.