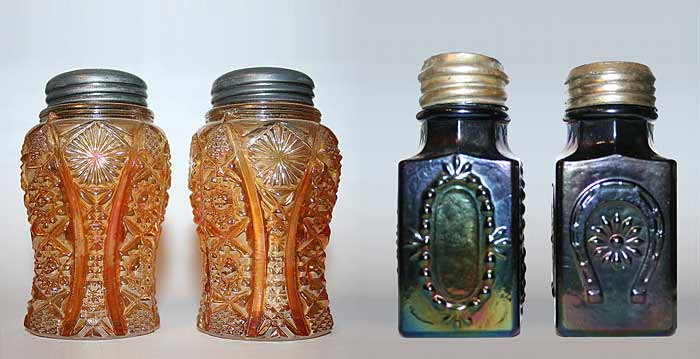 There are relatively few salt shakers made during the classic Carnival Glass era. Imperial Octagon, a fairly rare shaker to find in carnival glass finishes. The known colors that I'm aware of are marigold and amethyst. Challinor & Taylor Square Shakers, known in opaque and slag colors in an endless variety of colors. Clear colors are very rare in the non-carnival glass finishes. All of the examples that I have seen and own are iridized over clear colors. Patterns are Beaded Oval Mirror, Horseshoe & Astor, Square S and P, and possibly others. 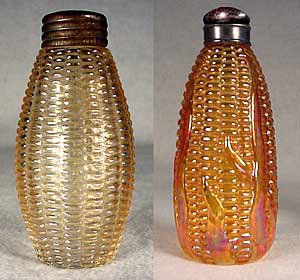 Libby Maize, known in a whole line of table items. The castor set consists of a patterned base with a salt, pepper, and mustard jar. The set as a whole is rare to find and in the marigold finish is extremely are to find. Other pieces in this line are known in the marigold finish. Imperial Corn Bottle, known in a variety of carnival finishes, is really a bottle and not a shaker. Some are found with a 2-piece shaker top that were added at a later point. (Note, the Little Barrel pieces have been found with 2-piece tops also, I'm sure later added). 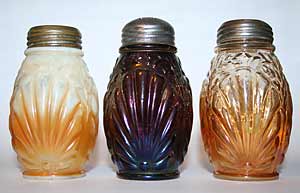 Seaweed and Shell, a most interesting pattern, possibly a Consolidated pattern but no conclusive evidence of that. Known colors are Marigold, Marigold on Moonstone, and Amethyst. There may be other colors out there. The total that I've seen besides the example shown I can count on one hand. 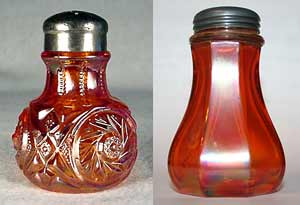 Aztec and Colonial shakers in marigold. Colonial: Ive only seen this shaker in marigold and believe it to be produced by US Glass. I know of 3 examples. I have a cruet in marigold that is hard to find but not as hard as the shaker. 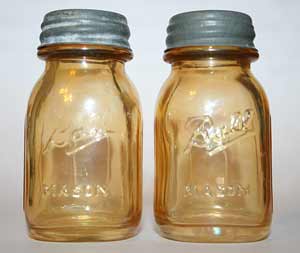 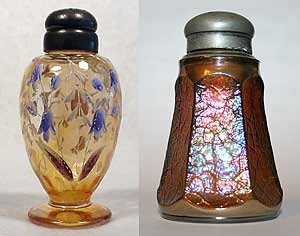 A decorated bulbous marigold shaker and a Soda Gold shaker in marigold. 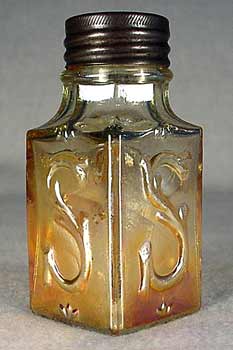 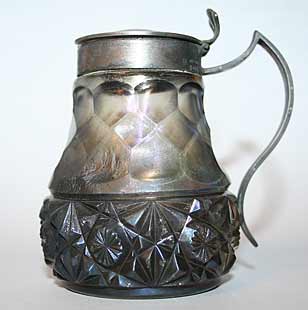 Smoke Mustard Jar, an unknown pattern to me and I've never seen another. Found at an Antiques Show in Kansas City, Mo. It does have a nice stretchy iridescence though! 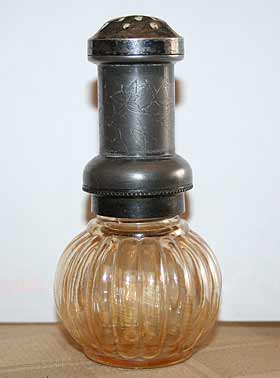 Ribbed combination salt and pepper. This small ribbed shaker in marigold with a most unusual top. The top vertical section unscrews and is a pepper. The lid under that is the salt shaker lid. Only one I have ever seen in carnival.

When I first heard of OLD carnival glass salt shakers, it was about 25 years ago when I first started collecting carnival glass. They were so hard to come by and I never had any in my collection. Back in 1994 I bought my first Victorian Art Glass salt shaker and 15 years later I'm still collecting.
My first exposure to carnival glass salt shakers was in the corn pattern. The first version is an iridized version of the Maize condiment set. The second is what carnival glass collectors call the Corn Bottle. I believe however, that the corn bottle shaker may not really be a salt shaker but a bottle that had a small cork for the top. I suspect that will be a point of discussion forever among shaker collectors. There are examples with 2 piece tops attached that fit rather well but I do not believe they are original.

Carnival Glass salt shakers are hard to find due to the fact, in my opinion, that fancy art glass shakers fell out of favor about the time carnival glass became popular. This also applies to toothpick holders. There are a few patterns known in carnival glass and are difficult to come by. The patterns that I'm aware of are Soda Gold, probably the easiest to come by. Some other patterns are Shell and Seaweed and Challinor square shakers in various patterns. The patterns are Beaded Oval Mirror, Seashell, Horseshoe & Astor, Crossroads Double, and Square S. Some of the Crossroads Double are very convincing and other are rather obvious that they are contemporary.

The Shell and Seaweed pattern is a mystery to me and I don't know of too many examples. The only colors I've seen are Marigold on Moonstone, straight Marigold, and Purple. It took me about 16 years or so to find those three examples!
The Challinor pieces are very rare and only a handful is known that I'm aware of.
In addition, Challinor shakers generally come in opaque and slag colors. Clear colors are very rare and seldom seen. The carnival glass Challinor shakers are all clear colors that Im aware of!

Some other interesting patterns are the Molded Prescut type patterns in Octagon and Aztec. Another interesting shaker is the Xray pattern and an enameled footed shaker in marigold as well as the Colonial pattern. I suspect others may surface too.
These shakers come in many known carnival glass colors. There are examples of Marigold, Purple, Green, and Blue. With the exception of Marigold, which has a base glass of clear, all other colors are referred to by the base glass color it possesses. The color of the iridescence will vary.

I'm sure there are others and some other unknowns may show up in the future.
The interesting thing about carnival glass salt shakers is that some of these shakers seem to show up in patterns (Victorian era patterns) by manufacturers that we thought never made carnival glass. That really makes you think where did these shakers come from and when were they really made? Were they made prior to the real production of carnival glass as we know it? (1907 to around 1920 or so) Or were these patterns made again by another manufacturer during the carnival glass period who may have acquired the moulds through glass company consolidation or even some of these pieces were iridized later on in their lives.

Many people are of the school that if a piece of carnival glass is iridized on the bottom it's not old. I'm not totally convinced of that, because known old carnival glass shakers in the Soda Gold pattern (some) do have iridescence on the bottom of them. I believe that carnival glass pieces are not generally iridized on their bottoms because they possessed a collar base. This base was designed to accept a snap–a device that held the piece during production and when the piece was iridized. The snap prevented the iridescence from covering that area. Shakers however, where mostly mould blown and were held from the top during production therefore, the piece can be totally sprayed with the solution that produced its iridescence.

There seems to be one exception to this rule with shakers. The Shell & Seaweed shakers do have a collar base, very small however, but its there and the Marigold on Moonstone is not iridized on the bottom but the Purple and Marigold are. So, how does that figure into the theories?

I recently purchased a pair of Mason Jar shakers with old zinc lids. They are iridized in a marigold finish. These are mentioned in an article by Dean and Diane Fry in their great carnival glass website as being iridized in mineral bath marigold which was done in Marlin, Texas in the early 1900s. This was done by exposing the glass to a highly mineralized water that would stain the glass a marigold color.

Not to add further confusion to this subject, I recently purchased a mustard jar in a smoke iridescence, pattern unknown to me. I've shown it to many people for their thoughts and I've received feedback from everything from wow, I've never seen anything like that before; that it was exposed to some kind of chemical; sat in water for a long time; to it was in a fire. Again, who knows and the mystery goes on. No matter what this mustard is, it is highly unusual to say the least!

It's just food for thought and I'm sure many of you have different opinions. But whatever your thoughts are, it's an interesting subject. 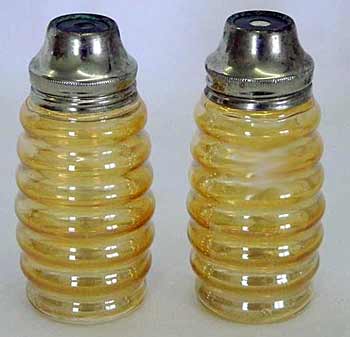 Mellon Rib salt and pepper. These sold at a Jim Seeck online auction in 2013, bringing $20. The age is questionable. 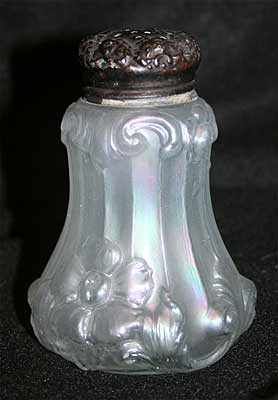 Scott sent me this photo of a white Eagles Dogwood pattern shaker in August 2013. He had recently purchased it during a sale of one of the largest shaker collections.