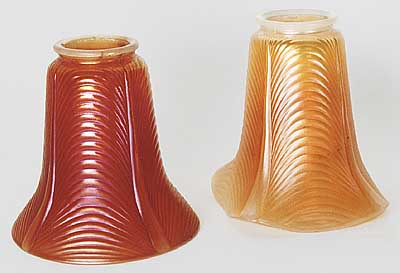 Sometimes just called Drapery, this shade is invariably found in marigold on moonstone, though it may be identified as milk glass or even peach opal. Most examples have a round opening as these two, but some are found with a square opening. Two examples sold for $55 each in 2002. Another sold in 2004 for $35 and a marigold example brought $20 in 2005.