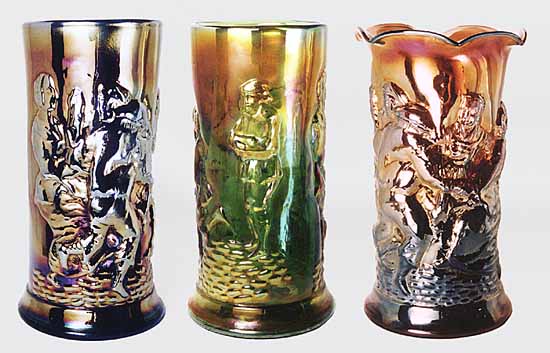 The most desirable of all Carnival vases–and perhaps of all Carnival patterns. Apparently made by Millersburg as a tribute to the people of Millersburg, Ohio, where the company was located. The pattern shows people dancing. There are only about 10 known. They include amethyst (all with ruffled tops like the vase on the right), green, blue, and marigold. Two in amethyst were discovered in 1996 and sold at auction that year. The perfect one brought $43,000; a seriously cracked one brought $13,500. Shown are blue, green, and amethyst, all from the collection of the late Floyd and Cecil Whitley.
Interestingly, the prices on the blue vase have been tracked over the years.

To see a video of the of the 2006 HOACGA sale of the blue vase, click below.