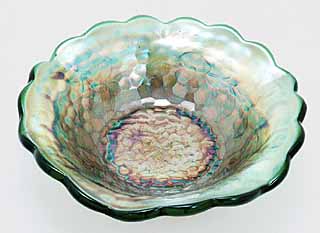 These sauces are often sold as Cobblestones but they are Fenton, not Imperial. You can confirm this by checking the back which, in the case of Pebbles, has Fenton's Honeycomb and Clover pattern. This one is also much smaller than the Cobblestones. You'll find these mostly in green, selling for between $15 and $25. Green bonbons sold in 2002 and 2005 for $23 and $20, respectively.