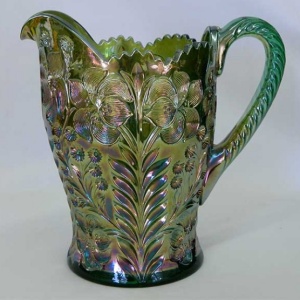 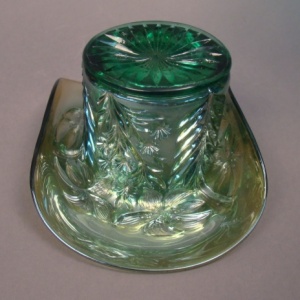 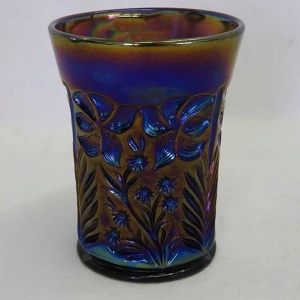 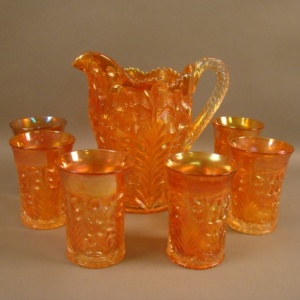 The Tiger Lily by Imperial pattern was listed as #484 and has a intaglio design. There are slight differences between the Imperial pattern and Riihimaki's pattern. Please reference Tiger Lily by Riihimaki for the sizes and specifics of that pattern. The Imperial Tiger Lily pitcher stands approximately 8 1/2″ high and the tumblers 4 1/4″. The top of the tumbler can be straight up or flared. They have a distinct collar base. The base of the tumbler has a 24 rayed star molded on the bottom. There is a whimsey hat made from a tumbler – the top rim is flattened and pulled down on 2 sides. The Tiger Lily pattern was copied in the 1920's by Riihimaki (a Finland company). It was also reproduced by Imperial in colors of ice blue, white and pink. The newer Imperial pieces are all marked with the Imperial IG or LIG. (see tigerlily-compare) 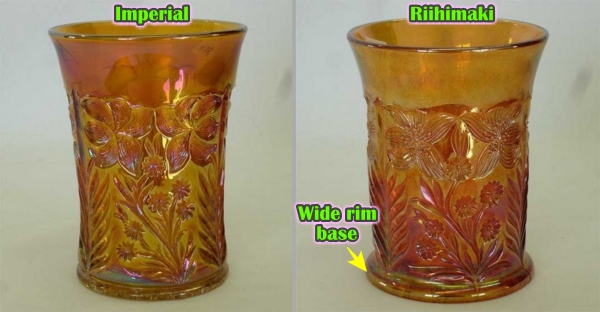 Multiple small differences in the pattern - easiest way to tell is that the approximately 3 3/4" tall Riihimaki tumbler base has a flat rounded lip (Imperial has a standard collar base and the tumbler is taller at over 4" tall).

Pitchers are quite different patterns - on the Riihimaki version the leafy fronds turn into wide leaves at the top. The fronds below are much wider and there is an unpatterned area between the fronds and the flowers.