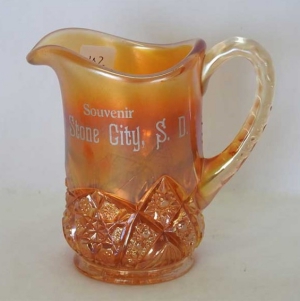 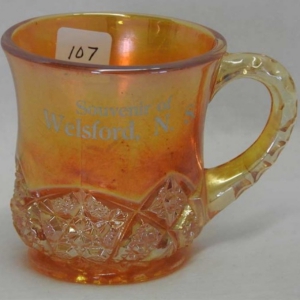 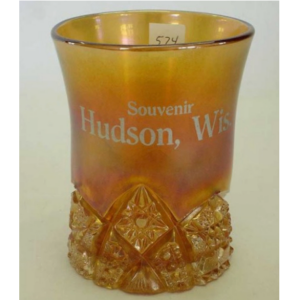 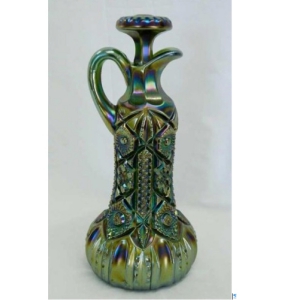 About Near Cut
Cambridge had a line (Near Cut was actually a trademark they used) that mimicked cut glass patterns. The different pieces in the line were given pattern numbers only – collectors have given many of the unique pieces names that seem to fit. Buzz Saw, Wheat Sheaf and Near Cut are the three names used for different shapes/pieces in this line.
The pieces called Near Cut by carnival collectors are the Creamer/Tumbler/Mug (pattern #2658), usually in marigold. They frequently have stenciled souvenir information on them. These Nearcut-Novelties1 are shown in the Cambridge catalog page. The creamer, mug and tumbler are small pieces compared to the 12″ decanter! The Decanter (pattern #2666) is exceptionally scarce and was a blown piece of carnival glass that has a rough pontil on the base. The piece was stuck onto a punty (a long metal tool) used to hold it while it was being molded and iridized; when finished, it was broken off, leaving this pontil mark. You can see the similar Wheat Sheaf Cambridge-pontil here.

These patterns are found in a very limited number of colors. The whiskey decanter is only reported in green. The pattern itself on the creamer, mug and tumbler consists of an 2 arches with a pendant shaped hobstar at the top and a small triangle below containing a fan shape alternating with a shorter hexagon hobstar. On the elegant and stately decanter the pattern consists of vertical alternating sections containing hobstars or a cane type filler. The bulbous bottom has concave ovals separated by pairs of what looks almost like a beaded strand.They definitely look very much like the cut glass patterns of the era. 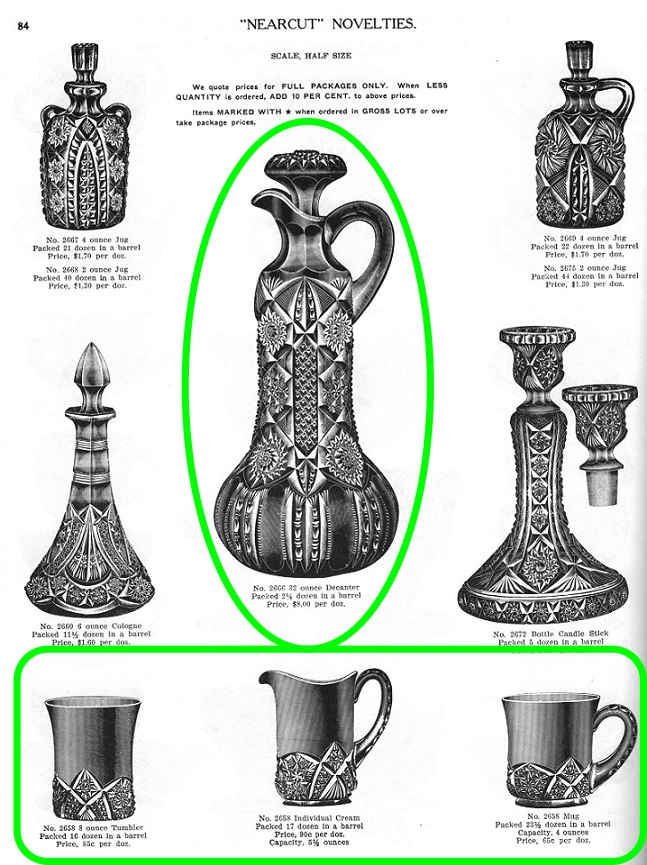 Cambridge Wheat Sheaf base pontils.: These molded pieces were put on a punty (long stick) when they were being blown; when broken off, it left a rough pontil mark in the base.