By Carl and Eunice Booker 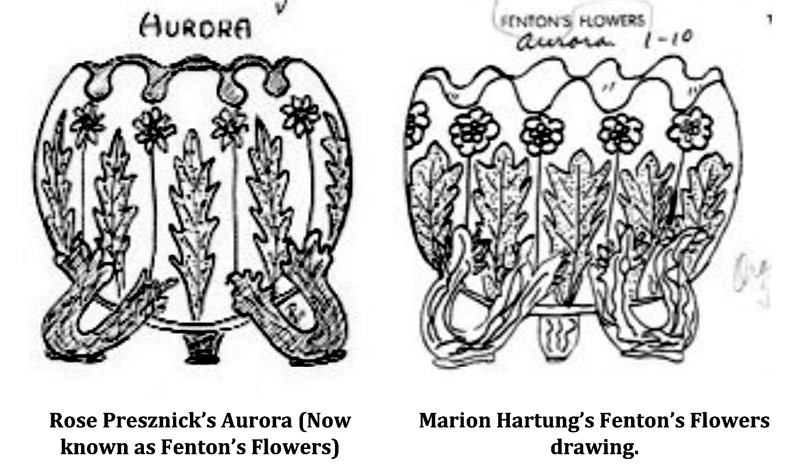 There have been many conversations concerning why the rosebowl shape made by The Fenton Art Glass Company has more than one name. I decided to check out my Hartung and Presznick books to see what I could find. The following information has been discovered:

Presznick shows in her Book 1, plate 10, a drawing of the rosebowl. She describes it as a rose bowl, five inches, and massive. She named it “Aurora (Fenton's Flowers).” She has a drawing in the illustration section of her book. (A scan of this drawing is shown.) There are several additional drawings of the Orange Tree pattern in different shapes and different names in her books.

In Hartung, Book 2, page 65 we find a rosebowl drawing with the Fenton’s Flowers name. She states, “In this exact form, Fenton’s Flowers was used solely on a large rose bowl 5 1/2 x 4 1/2 inches. The advertisements said ‘massive, heavy glass,’ but in comparison to the weight of the glass used on the big Orange bowls, it seems only average in thickness.” This would lead one to believe that she is comparing the rosebowl to a large orange bowl, yet she has named it differently. One can only wonder why. (A scan of her drawing is shown.)

While Hartung directly names the rosebowl shape “Fenton’s Flowers,” Presznick only refers to it in parentheses, using the pattern name “Aurora.” Thus the confusion continues to this day. We now find that this rosebowl is referred to as “Fenton’s Flowers.” Many collectors just call it by its pat- tern, “Orange Tree.” Yet, it also was given the name “Aurora.”

It’s interesting to see that both of these authors’ drawings are quite similar. When compared to an actual rosebowl, they both seem to have simplified the “orange flower” quite a bit. When looking at the actual rosebowl, one sees a much fuller flower showing fruit and leaves. At least that is what I see. I’m not meaning to discredit these two authors as they pioneered the pattern books. I’m just trying to see and find out why the different names were used for such a documented pattern, as they both have shown several other “Orange Tree” shapes. (There are other pieces drawn in their books, but I have chosen not to highlight any of them.)

I apologize for any confusion that you have as a result of this article. Just remember, I’m just as confused as you might be. I do believe that “Fenton’s Flowers” is the accepted name for the rosebowl, even though we all know it is part of Fenton’s Orange Tree pattern line. 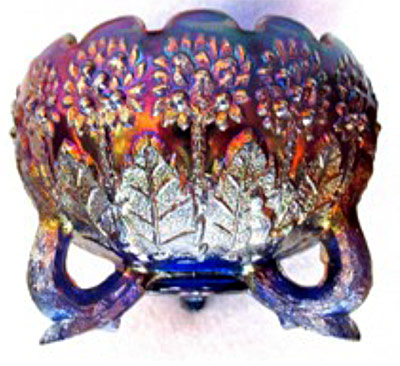 Above is a blue Fenton’s Flowers rosebowl.
Photo and drawings courtesy of the Bookers.