Vases listed as Northwood Thin Rib are actually four unique patterns. They are each discussed below. Each of the Thin Rib vases are found in assorted colors.
Thin Rib

First, above, is the “Thin Rib” pattern in three photos. It is pictured here in Smoke and Green. Also pictured are the top and the base of the Green vase. The Green is a squatty version. These vases have nine ribs and nine flames at the top. The ribs are thin at the bottom and have clear unpatterned space between them. The ribs get somewhat thicker as they go up the vase and then they end within the flame just short of the top.
The base of the Thin Rib extends out from the vase as if the vase is sitting on a disc. 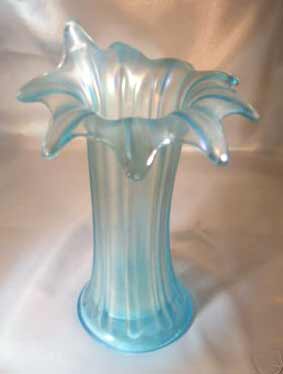 The Thin Rib and the Thin and Wide Rib discussed below are the molds used to make the Jester's Cap version (pictured above). A jester cap vase is a vase with one point pulled up, and in the case of any of the Thin Rib vases is very scarce.pic

Next, above, is the “Thin Rib Variant” pattern in three photos. It is pictured here in Green with an “Alaskan” iridescence giving it a much different look than the Green squatty vase pictured above. The ribs differ from the above “Thin Rib” pattern in that the ribs do not stop just below the top, but extend beyond the top and create points. The top of the vase does not have flames but points. There are nine thin ribs with clear unpatterned space between them. Like the Thin Rib, the base of the Thin Rib Variant extends out from the vase as if the vase is sitting on a disc.

Next, above, is the “Thin and Wide Rib” pattern in three photos. It is pictured here in two vases; Ice Blue and Citrine. Also pictured is the Ice Blue base and the top of the Citrine vase. There are clearly alternating thin and wide ribs with no clear space between them. At the top, the thin rib stops within the top flame and the wide rib also stops just before the top. There are nine flames at the top of the vases and thus 18 ribs (nine thin and nine wide). 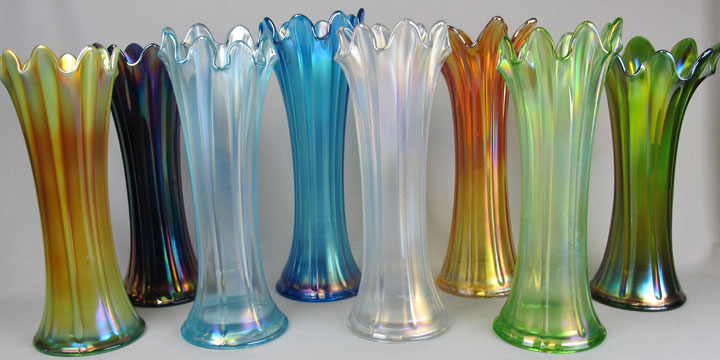 And finally, above, is one photo of the “Thin Rib Mid-size” pattern in aqua opal, blue, ice blue, sapphire, white, marigold, ice green and green. The Thin Rib Mid-size vase is also found in amber, amethyst, russet and vaseline. Today, we simply think of this vase as a larger size of the Thin Rib” pattern, but it has a major difference. It only has eight ribs ending just short of the top within the eight flames. Having only eight ribs and eight flames is different than having nine ribs and nine flames and thus it is a unique pattern. Thin Rib mid-size vases have a base that is 4 3/4 inches across. Typically 11 to 14 inches tall. Some mid-sizes are swung to a taller 15 to 17 inches, especially those found in russet. An unswung mid-size is considered a jardiniere.

This leaves us with the four unique patterns discussed above: “Thin Rib”, “Thin Rib Variant”, “Thin and Wide Rib” and “Thin Rib Mid-size”.