So it came as a shock to discover that there is a 5th company: Truckey & Son Dept Store 1910.
I tried to google the name, and came up with a sale listed on Worthpoint – the description says that it is extremely rare. But curiousity set in – where were they located? Could I learn anything more?

My siblings and I have had our DNA tested with Ancestry, and my sister and I have had a lot of fun trying to find our maternal grandparents (Mom was adopted and never knew who they were). We found Grandma Alice (and a plethora of relatives!) and are still searching for Grandpa. But I have used Ancestry to look up grandparents for a friend…so maybe I could find something.

I started searching, deciding that if the store was advertising in 1910 and Mr. Truckey had sons, he probably was born in or around 1880, so that was the start. There were two Truckey groups in the 1910 census– one in Wyoming and one in Michigan. I looked at a few in Michigan, but their employment didn’t fit the bill.
When I started looking at George Truckey (who was 27, married to Agnes, living in Cheyenne Ward 3, Laramie, Wyoming) his occupation was listed as ‘Salesman’, industry was ‘General Store’ and employer, employee or other said ‘Employer’. Yay!! This could be it…..but wait. His only son was less than a year old.
Could this 27 year old George be the ‘son’ sharing ownership in the store?
– 1900 census, and Geo A Truckey (we got his middle initial, and it says he’s 19 – yeah, I know, the ages don’t always work out quite right….or somebody was really bad with math) was living in Cheyenne Ward 1, Laramie, Wyoming – with his parents and siblings. His dad was also Geo Trucky (the last name is spelled differently, someone forgot an e – which happened a lot in census records), age 43. Young George was listed as a Grocerman (unmarried) and he had 2 younger brothers, Arthur (17) and Alfred (Fred – 14).

Okay, let’s look at dad. He was in the 1860 census at 4 years old, living in Ogdensburg, St Lawrence, New York (parents Alex and Elizabeth). Fast forward to 1880 and he’s now 23, married to Catherine (20), living with his parents and a younger brother in Cheyenne, Laramie, Wyoming, working as a clerk.
-1900 he’s 43, living in Cheyenne with wife Catherine, working as a Grocerman. Geo A, Arthur and Alfred are living at home (and Anna Hollihan, age 21).
-1910, he’s 53, living in a different house in Cheyenne with Katherine and Fred – but he is now listed as the Proprietor of a Dept Store.
I think I found Mr Truckey!
But, here is where the story takes a different bend:
-1920 census (and I had to look up Arthur, because George wasn’t showing up under that search) George H (now 58), his wife Kathrine, son Arthur, Arthur’s wife Ethel and a 10 year old daughter Queenie are now living in Boise, Idaho.

What happened? After telling the story to a friend, he found a newspaper article from March 13, 1912. In it, Truckey & Son (the largest department store in the city) was forced into bankruptcy. Two other Cheyenne business were also listed as becoming bankrupt. 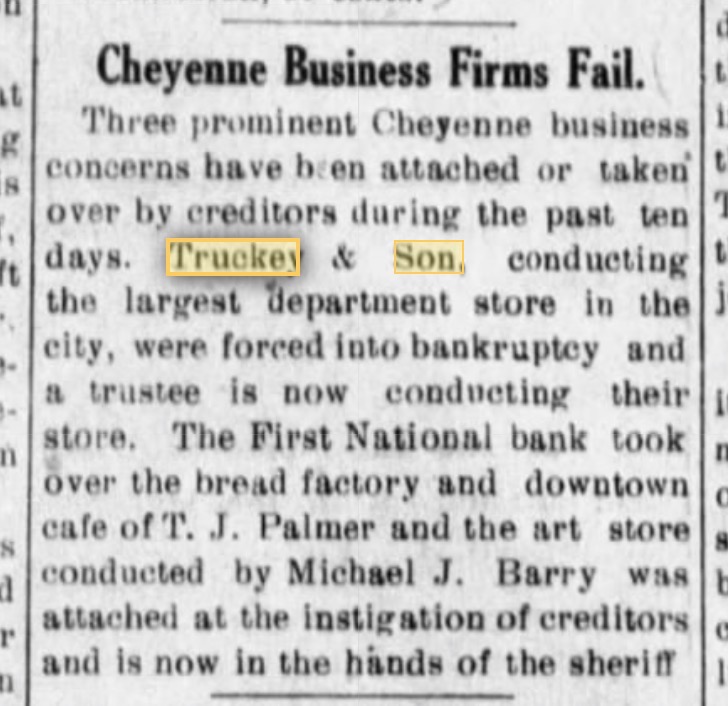 Geo A (the first Truckey clue) is shown in the 1920 census as living in Salt Lake City, Utah. He’s now 39, working as a Salesman in a Shoe Store.

So, we found Truckey & Son in Cheyenne Wyoming in 1910. Now we just need to find the carnival glass green Peacock Tail hat they gave away! 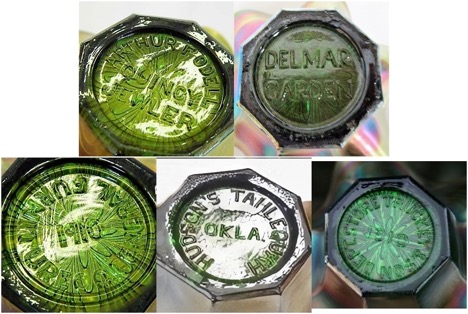