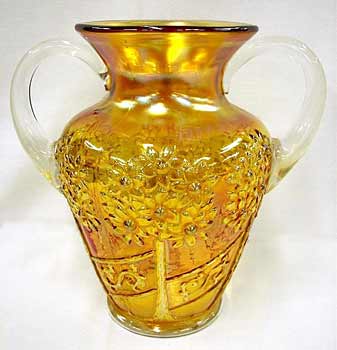 The story of the Orange Tree Orchard Vase being in discovered in the mud of the Ohio River, not far from the Fenton factory. Presumably it had been lost in a flood that occured many years before.

Dave Doty shared this letter written by Mark Sider in 2005:

“I'm not sure of the exact year, just that I am 42 years old now and the reason my mother gave it to me was I used to look at it as a baby enjoying the iridescence, she passed it on to me when I got my first apartment. We lived in Marietta Ohio at the time and my father often would fish on the banks of the Ohio river. Years later my Mother and I went to the Fenton Museum where we came upon the pitcher and tumblers. This led to an eventual meeting with Frank Fenton who actually wanted it for the museum. I kept the vase for a few more years, sold it, and used the cash for my first trip to Europe.”