These past few weeks I have been listening to some educational CD’s on ancient Egypt. One of the things that I was not aware there were two cities that the Pharaohs made their homes, one was Thebes and the other was Memphis. Both cities have a Carnival Glass pattern by the same name. I do have some candlesticks that are named Thebes, but this article is about one of my favorite patterns: Memphis.
Memphis, Egypt was founded 3,100 B.C. and was completely abandoned around the 7th century A.D. Memphis the glass first started being produced in Crystal in 1907 and in Carnival around 1908. Between 1950 and 1957 several temples and statutes were discovered in Memphis, Egypt. Those same years more and more people started discovering the beauty of Carnival glass. Egyptologist’s are still researching the city of Memphis, Egypt while carnival glass collectors are still looking for Memphis pieces that are yet to be found.
Memphis the glass was originally named Northwood’s #19. Both Rose Presznick and Marion Hartung seemed to agree to keep the name Memphis which seems to have been the title used by Northwood later. Northwood produced several different pieces in crystal but very few other shapes of carnival. The most common shapes are the fruit set in which the base of the bowl fits over the top of the stand; the punch set in which the top fits into the top of the stand; punch cups and berry sets. There has been known a tumbler, spooner and shakers. The base for fruit bowl and punch bowl are the same. According to Hooked on Carnival, fake butter dishes have been appearing.
This geometric or near cut pattern reminds me of something Imperial might have done but is really one of the few geometric type pattern that Northwood produced in carnival. Virtually all the pieces carry the Northwood Trademark. Butler Brothers catalog, fall, 1908 has advertisements of assortments of crystal with the Memphis pattern. I would love to discover a complete table set in Ice Green just like the city Memphis, Egypt was rediscovered in 1907.
When I first started collecting there was a question asked in the Lincoln Land Newsletter— “What piece of glass would you like to own?” I responded an Ice Blue Memphis fruit set. Well, April of 2016 I was persistent, like the archeologists looking for the King Tut’s tomb, and purchased an Ice Blue fruit set. 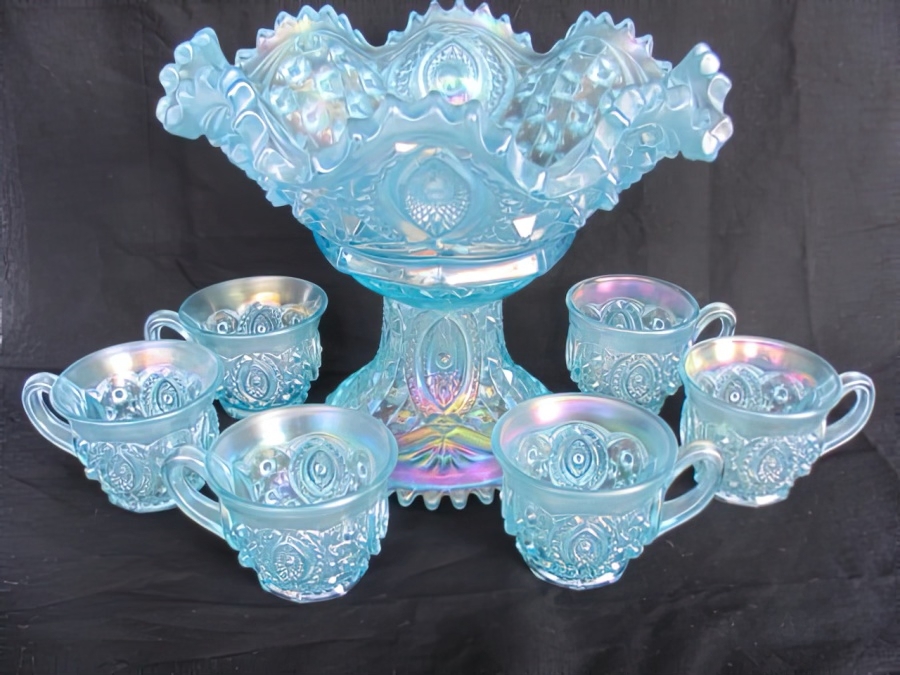 It went home to be with my Marigold fruit set and Amethyst punch set. I have also since purchased a green punch set, ice green fruit set, white punch set, and the crystal punch set. I finally even obtained the King Tut of Memphis pieces and now have the blue fruit bowl and base. I am continuing to search and “dig” for the blue punch cups.

Reprinted with permission from Kenda Jeske and the Lincoln Land Carnival Glass Club (published in their newsletter 2019).