Kingfishers are a group of small to medium-sized, brightly colored birds in the order Coraciiform. They have a cosmopolitan distribution, with most species found outside of the Americas. The group is treated either as a single family, the Alcedinidae, or as a suborder Alcedines containing three families, Alcedinidae (River kingfishers), Halcyonidae (Tree kingfishers), and Cerylidae (Water kingfishers). Roughly 90 species of kingfishers are described. All have large heads, long, sharp, pointed bills, short legs, and stubby tails. Most species have bright plumage with few differences between the sexes. Most species are tropical in distribution, a slight majority are found only in forests. They consume a wide range of prey, as well as fish, usually caught by swooping down from a perch. While kingfishers are usually thought to live near rivers and eat fish, most species live away from water and eat small invertebrates. Like other members of their order, they nest in cavities, usually tunnels dug into the natural or artificial banks in the ground. A quarter of all kingfishers nest in disused termite nests. A few species, principally insular forms, are threatened with extinction. In Britain, the word “kingfisher” normally refers to the common kingfisher.
Crown Crystal Glass Co. is known to have used two molds for the Kingfisher pattern, with three edging variations. The first run of bowls was a simplified version of the 9” Kingfisher Master Bowl. It was produced to test the market. It must have piqued the interest of the public because a second round of bowls was produced; with the addition of the registration design number RD 4184. Basically three colors have become known in Australian iridescence ware: Marigold, Black Amethyst and Aqua.
Marigold was the first, using clear glass which was sprayed with a mixture of iridescent producing chemicals while it sat in the glory hole. The mixing and application of the spray was not controlled and a wide range of Marigold, from pastel to dark golden hues, was produced.
The second color, Black Amethyst, used a range from dark purple to fiery amethyst base glass, were also sprayed with chemical oxides to produce the dark iridescent effect.
And then there was Aqua. Many people think aqua was a mistake color. It is my opinion this color was made to cover up imperfections in the glass at the end of the day production. This aqua color was made from throwing broken bottles and glass bits and the metal tops into the pot for recycling.
An unusual feature of Australian glass manufacturing is the early one piece molds used which were without a collar base. The cup-like punty was attached to the liquid glass base until after it was completed and then the bowl was broken away, leaving a sharp and ragged base. The base was later ground, often leaving traces of chipping. Due to the cup-like punty, the inside of the base were rarely iridized. The difference between the iridescent finish of carnival glass and the later luster finishes were originally achieved by exposing the glass while hot to the spray mixture, reheated in the glory hole verses later the finishes were achieved with the metallic resonate applied to the cold glass by spraying or brushing and afterwards firing at a lower temperature.

Here are some pictures of the Kingfisher Master Bowls; the first is of the original mold. This one has breath taking iridescence. 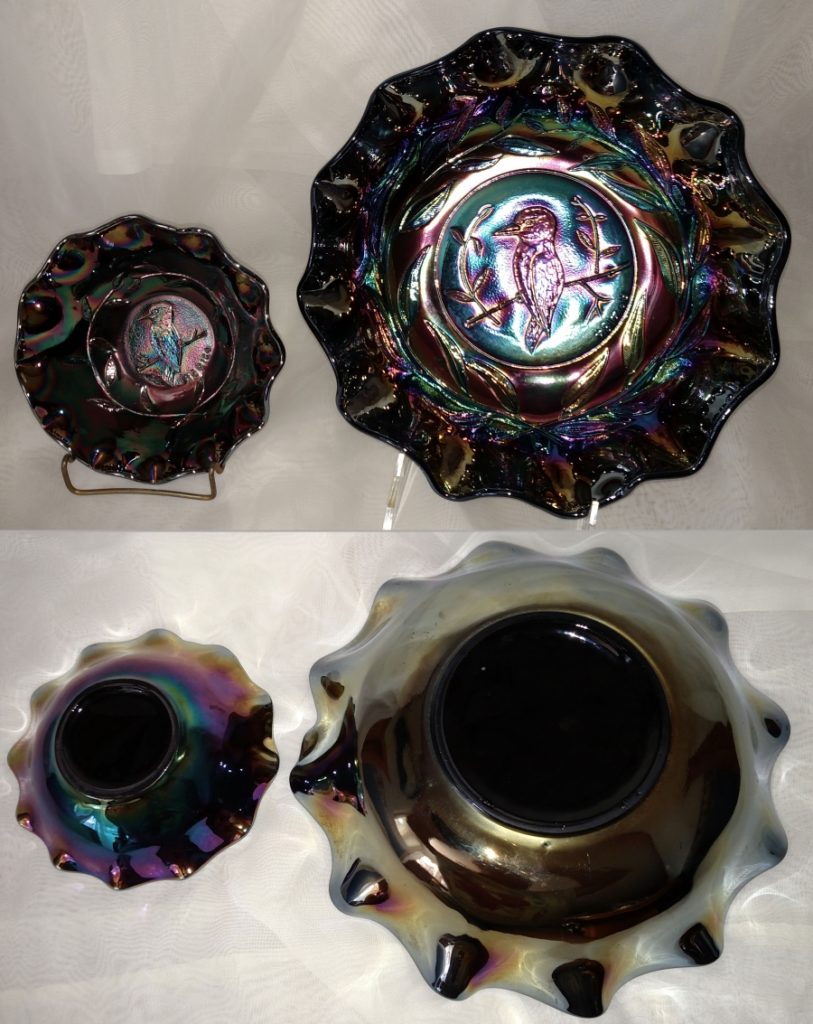 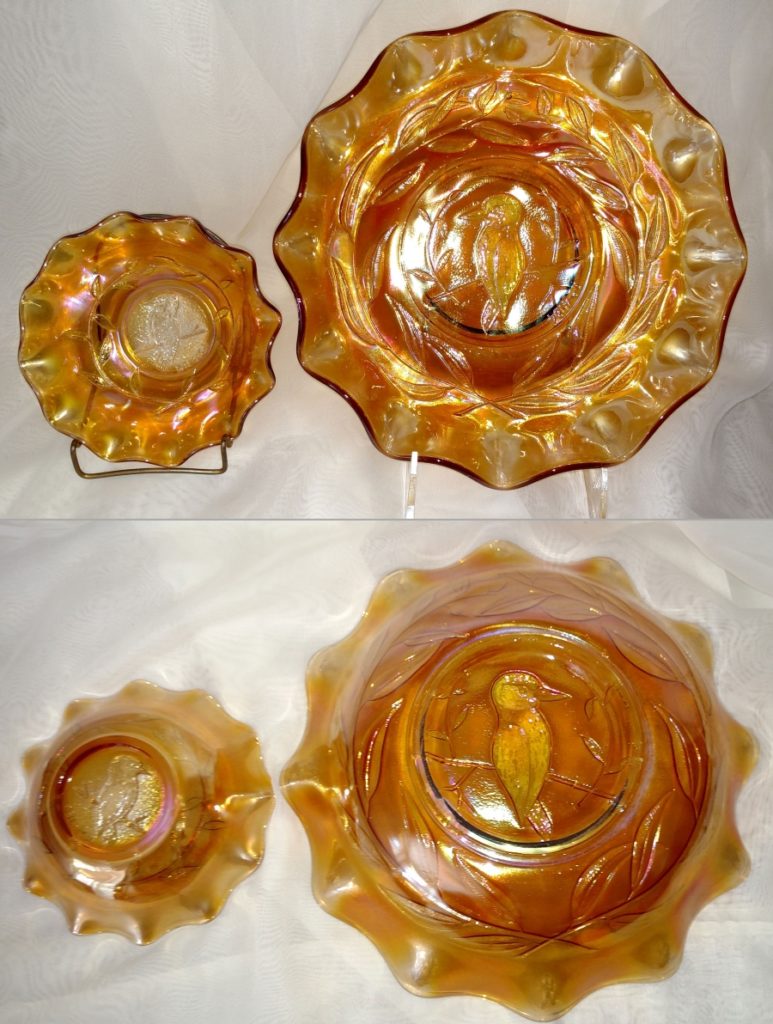 The second sets of pictures are of the Kingfisher Variant Bowl, notice the extra leaves and berries added to the pattern. 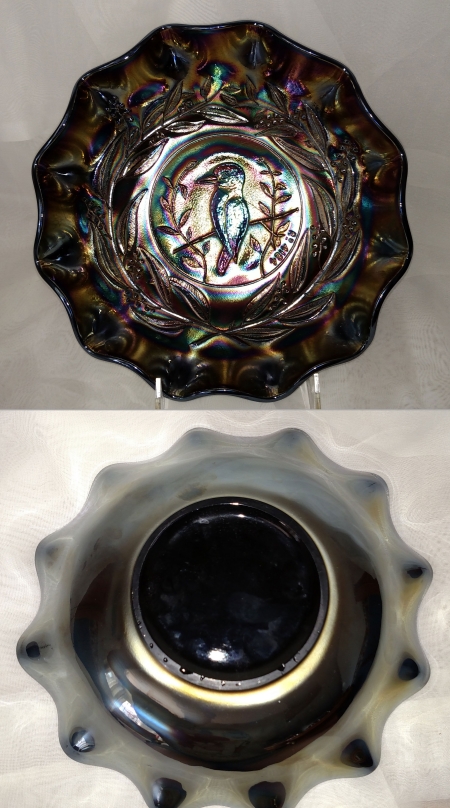 Be aware and study your patterns because reproductions of the 5” nappy bowl in marigold and dark have been spotted selling on Ebay. If you spot any of these reproductions contact the seller and let them know. But please give them the benefit of the doubt, that they may not know any better. Education is a powerful tool.