Dugan Thin Panel Vases & Me
By Neal Becker (Published in the ICGA Pump 3/2018, printed with permission)

This article has been rattling around somewhere in the back of my brain for a few years, spurred toward a frontal lobe on occasion by a gentle nudge from my good friend and Dugan expert, Dr. Larry Keig. Larry figures prominently in my passion for carnival glass and this pattern in particular. Our friendship goes back to when he was my music professor at Upper Iowa University in Fayette, IA back in the later 1970’s. I was around when he first started collecting carnival glass and it rubbed off on me too, although it took some years for me to actually make myself spend money for glass.
Flash forward to the early 1990’s. There was a traveling antique show in Davenport, IA where I live. There I encountered a purple jack-in-the-pulpit (JIP) Thin Panel vase (labeled with the name Many Ribs). The price on the vase was $55. It was pretty enough, but I just couldn’t decide if I wanted to spend that much. I really liked the shape, but I wasn’t enthralled with the rather simple pattern. I remember looking at the vase numerous times, but I ended up not buying it.
A couple of weeks later that antique show had moved on to Cedar Rapids, IA and Larry purchased the same vase I had agonized over. Every time I visited him after that, I would look at the vase and be reminded of how I let a nice vase get away. I was still without a Thin Panel vase in 1999 when my brother suggested that I start looking on eBay for collectibles. My very first carnival glass search on eBay uncovered another purple JIP Thin Panels vase. I tried for it, but being unfamiliar with the ways of bidding on eBay, it got away from me and sold for about $210.
After that, I was more determined than ever to get my own purple JIP Thin Panel vase. In pursuit of that quest, I also started purchasing other Thin Panel shapes and sizes. Here’s what I’ve learned through research (historical data is limited) and more than 25 years of following and collecting this particular pattern. All Thin Panel vases have 20 panels (flat ribs). Each individual flat panel is approximately 5/8” in width when measured at the base. The base has a diameter of 2 ½” to 2 5/8” and the base bottoms are slightly concave and smooth (no star or rays). The panels may go straight up from bottom to top or they may have a twist in them from the stretching process. The panels end a couple of inches before reaching the top of the vase.

Thin Panel vases are available in two basic colors, purple and peach opalescent. Purple can mean amethyst, purple, or oxblood base colors as I have examples of all three. Both the interior and exteriors are iridized. Shapes available in purple are jack-in-the-pulpit, six-ruffled, and six-sided. 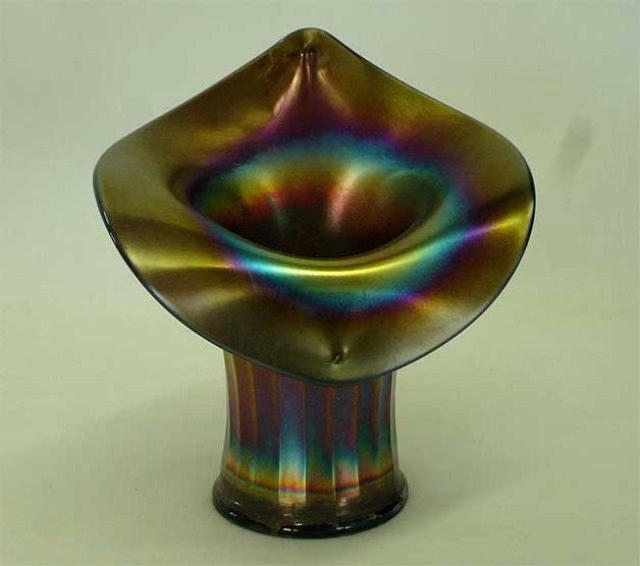 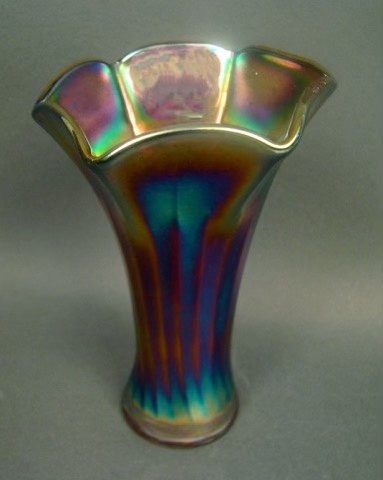 Thin Panel JIP vases have the typical front edge bent down and the back rim finished to a point facing the ceiling. The purple JIP vases come with a smooth rim only and normally reach a height of 5” to 7” at the back point. A purple JIP vase was reported sold in 2006 with a height of 10”. Thin Panel ruffled vases have an up and down wave-like rim. Typically, purple six-ruffle examples vary in height from 5 ½” to 7 ½”. The six-sided vases are different in that they have flat sides that face out on a vertical plane similar to the rest of the vase. These vases are generally a little taller with heights in the 6 ½” to 8 ½” range. I have one purple six-sided vase that is 10” tall.
There is even more variety in the Thin Panel peach opal vases. Shapes are: JIP smooth, JIP crimped, tri-corner crimped, six-ruffle, eight-ruffle, and six-sided. 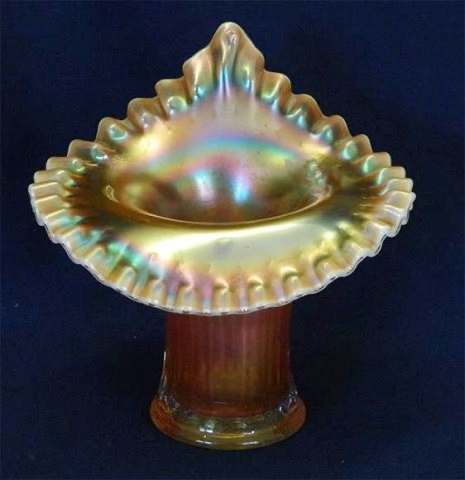 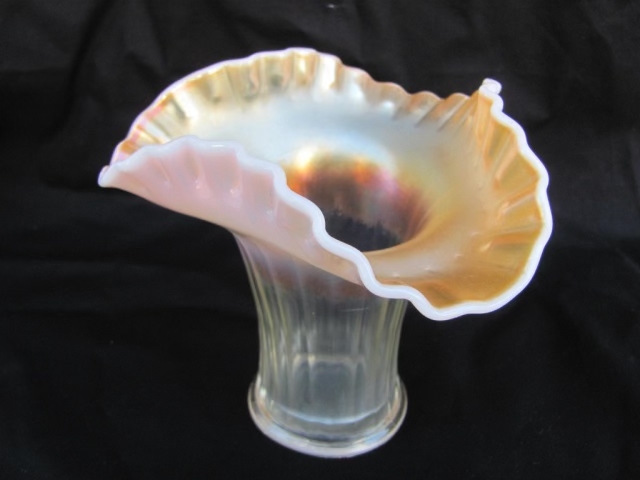 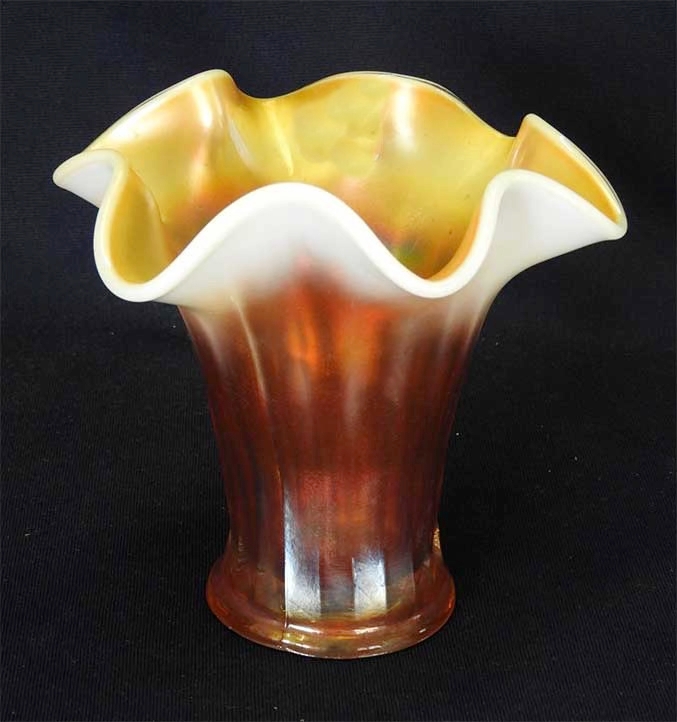 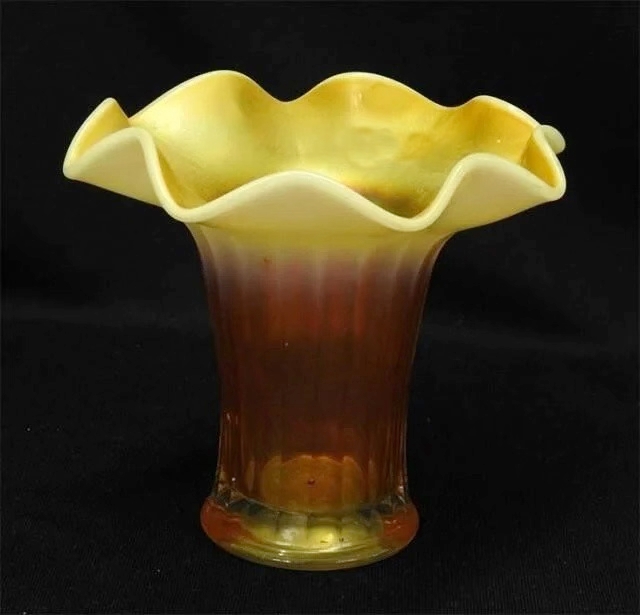 The peach color is an interior overlay on clear glass. However, there are a few reported examples of six-ruffle vases with a base of camphor glass. Camphor glass is clear glass that has been treated with hydrofluoric acid vapors to give it a frosted whitish appearance. The interior peach treatment can vary from extending all the way from top to bottom to just occurring in the top couple of inches. The exterior opalescence can vary in the same manner. The applied iridescence is on the interior of the peach opal vases.
Peach opal pieces in my collection include an eight-ruffle that measures 4 ½“ in height, a crimped edge tri-corner at 5”, six-ruffle vases (including a camphor glass) at 5” to 7”, a crimped JIP at 6”, smooth JIP vases from 7” to 8 ¾”, a six-sided vase at 7 ½”, and an odd sort of indented six-sided vase at 6 ½”. The mouth (flare) at the top of the vase (for both purple and peach opal) varies from 3 ¾” on a six-sided vase to 6 ½” on the eight-ruffle vase. Six-sided vases usually have a smaller mouth.
Most shapes in both purple and peach opal are available. The six-sided peach opal vases seem to be the most difficult to find and the peach opal pieces with a camphor base should be considered scarce. Although this pattern is relatively common, finding purple vases with attractive iridescence and peach opal pieces with quality peach and opal treatment can be a challenge. That, along with the variety of shapes, height, and mouth sizes, makes this a fun pattern to pursue. There is always a possibility that there are other shapes or colors out there from what I’ve reported. If there are, those would have to be considered extremely scarce.
Finally, I’m happy to report that my quest to acquire a really nice purple JIP vase was realized at the Morgan auction in 2011. Thank you, Larry, for your Thin Panel purchase all those years ago that inspired me to build this unique part of my collection.