Dolphins, Double Dolphins or Twin Dolphins are the names used for the same pattern by Fenton. There is also a Dolphin pattern by Millersburg and a Diving Dolphins by The English glass company Sowerby. Non iridized dolphin tall candlesticks can be found back as far as 1830. The Fenton stretch pattern is #1623 and is considered a crossover with the carnival glass world. My article is focusing on these short candlesticks. 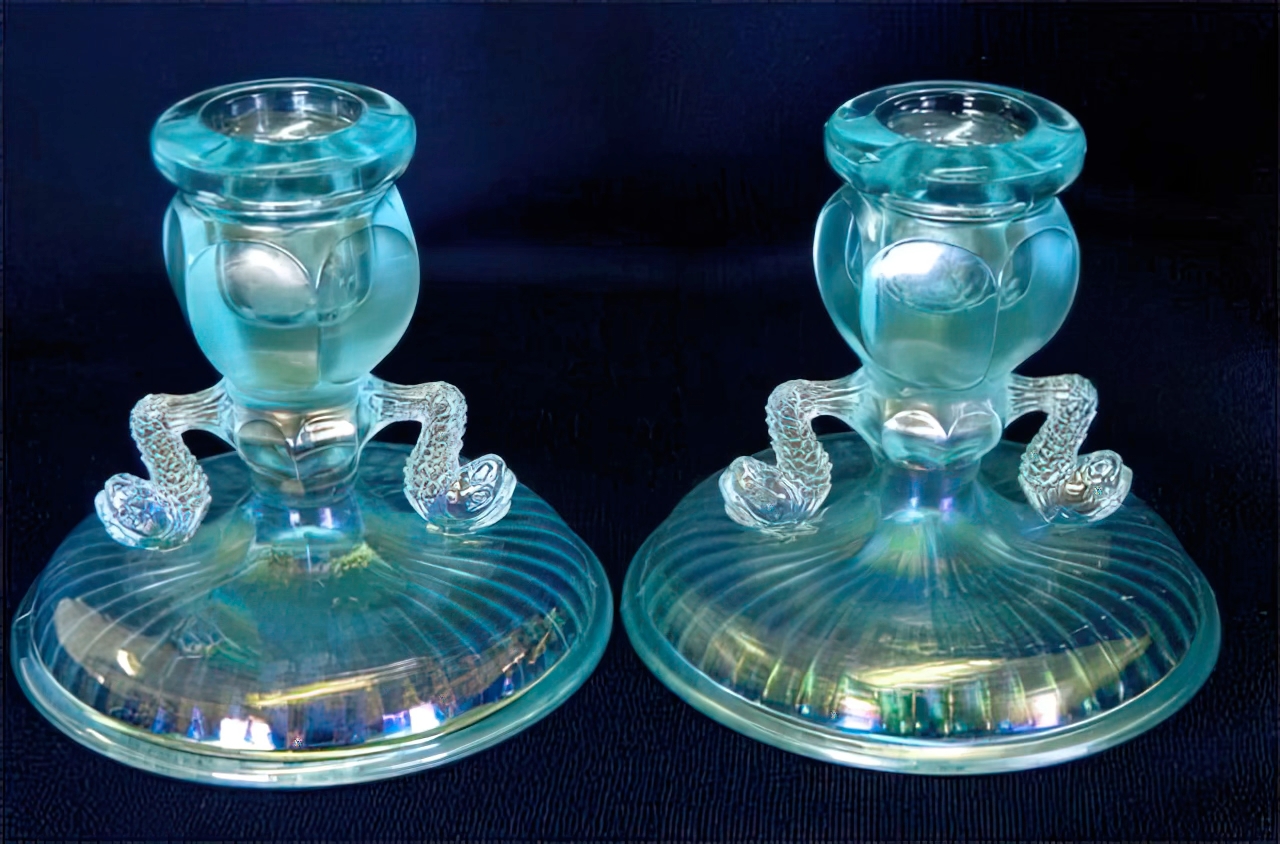 First a little history of dolphins. Many of us grew up with the TV show Flipper. The fun-loving torpedo-shaped mammal swimming through the ocean. There are fossil records of the dolphin family dating back 11 million years. Pictures of dolphins have appeared in art forms as early as 1500BC. Greek philosopher Aristotle (384-322BC) told stories of dolphin interacting with people and described them as mammals. For centuries, many ancient cultures have given dolphins a special place in their legends, myths, and folklore.
There are many symbolic meanings with the dolphin. A few are playfulness, transcendence, gentleness, harmony, intelligence, contentment, friendship, generosity, power, grace, and resurrection. Ancient Greeks had several myths about dolphins. This image is not the “flipper” looking dolphin and it appears almost to look like a sea serpent. It was common for early Christians to use dolphins in early symbolism. A popular symbol in Early Christianity is a dolphin twisted around an anchor. The dolphin symbol speaks a powerful message by signifying the hope for eternal life. The anchor represents endurance and ability to preserve.
The simple image of a crudely drawn fish was an initial representation for Jesus Christ. The dolphin represents Jesus. By extension, dolphins were also viewed as a symbol of Christ, and would frequently show up in works of art. One famous work of art is the fountain in Brighton, England that was created in1846 to honor Queen Victoria. This fountain has two life sized dolphins twisting around each other. Looking at this fountain you can see the same dolphins that are represented on our beloved carnival pieces.
This image of the dolphin/ sea serpent creature has carried over to the carnival glass molds. It is always interesting to research some of the patterns and try to figure out how the mold makers came up with the design that they did. According to Glen and Stephen Thistlewood’s website, Carnival Glass Worldwide, and an article on Sowerby’s Diving Dolphins, the first bowl (non-iridized) was made in1882, probably using the fountain mentioned above as a guide. Then in 1920, Sowerby began to make iridized glass. Fenton used the same type of dolphin image for its production of the dolphins from 1927-1937. Fenton reissued the small candlesticks for QVC in 1994.
The smaller Fenton candlesticks are 3 ½” with a 4” base. All the bases have either a floral or ribbed pattern under the base. They were produced iridized and non-iridized. Some of the iridized are ice blue, ice green or Florentine green, pink or Velva Rose, light purple or Wisteria, Vaseline or Topaz. A few of the non-iridized are ruby red, amberina, depression amber, black, clear, and jade. The newer QVC was issued in a dusty rose. The reissue does not have the Fenton logo, but the socket rim is slightly smaller. Dusty Rose was not one of the original colors. 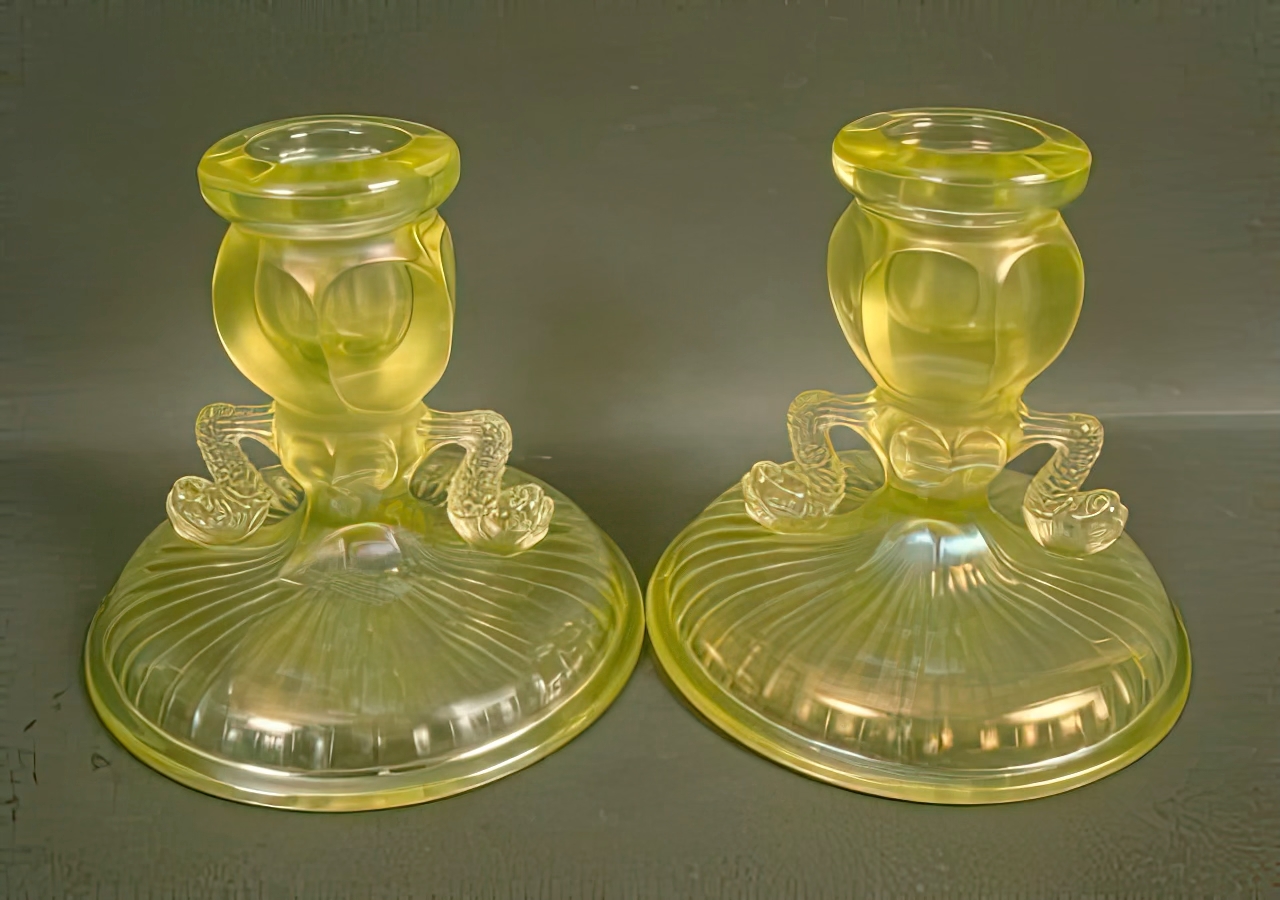 Reprinted with permission by Kenda Jeske and the Lincoln Land Carnival Glass Club (printed in their newsletter 2021).