Blackberry Wreath is a pattern that was produced by the Millersburg Glass Company during its short duration. This is a confusing pattern because there are several other Millersburg patterns that are very similar, having nearly the same leaf and berry design surrounding the outer area on the interior of the bowl. Blackberry Wreath most normally comes with a center design of a berry centered as a part of the three leaves surrounding it. 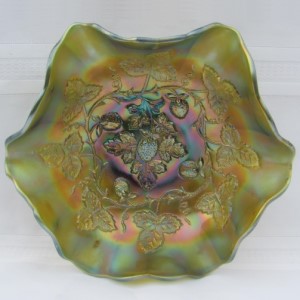 A rare variant will have four leaves surrounding the pattern. To me this middle variant design looks like a butterfly, with the berry being the body and one large and one small leaf being one of the wings with a parallel “wing” pattern on the other side of the berry body.

To confuse us more, the Grape Leaves pattern has four leaves radiating out from the center berry, but in this pattern the berry is separate from the four surrounding leaves which radiate away from the berry. 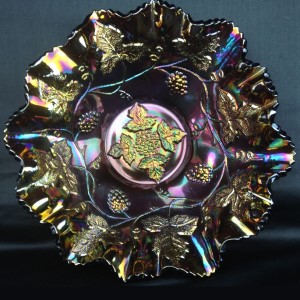 Another confusing design is Strawberry Wreath with just a jeweler’s bead (a dot) for the center design. Someone once told me that this would make this the most desirable design. I will leave that decision to you. 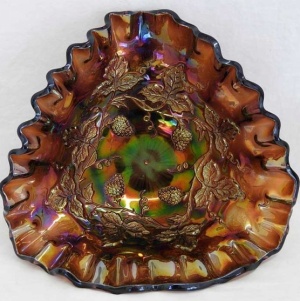 With all these very similar designs, it is no wonder the Millersburg company had trouble staying in business, since the designing of glass molds was a costly production. Even in the very rare People’s Vase, there are two variations of mold designs, according to a conversation that we had with the Wills.

Blackberry Wreath comes in a fair variety of shapes, but bowls of various sizes are the most common. There are nine to ten-inch bowls in ruffled, three-in-one, and ice cream shape available in amethyst, green, marigold, and scarcely found blue bowls. A large square shape has also been found in amethyst and marigold. There are six inch sauce bowls known in amethyst, green, marigold, scarcely found lavender, and one ruffled and one ice cream shape known in blue. A small tri-corner bowl is known in amethyst. The third sized bowl is about seven to eight-inches in diameter, and comes in the traditional amethyst, green, and marigold. There is one blue ice cream shape reported. There is also one amethyst tri-cornered bowl known and a flared, round amethyst bowl known. Pictured also is our marigold flared eight and one-half inch bowl that was formerly in the Reg and Linda Dunham collection. 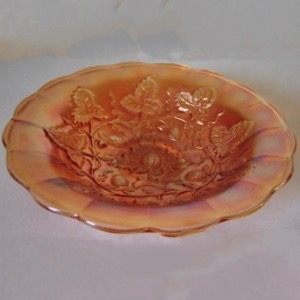 A complete green berry set was reported as selling by Dave Doty on his website. Rarely seen pieces are the six to seven-inch sized plates; an amethyst, a green, and six marigold ones are known according Carnival 101. Mr. Doty has two amethyst and two green selling, which might have been the same one selling. Also known are the rare chop plates which measure nine to ten inches in diameter. There is one amethyst known, which has chips on the edge, and two marigold. Spittoons are known, and it is reported that there are three marigold and one amethyst. In Dave Doty’s first Field Guide, he also reported a seven-inch marigold rosebowl and a green eight-inch plate. I have not had the opportunity to see these pieces. At any rate, the Blackberry Wreath pattern presents one with an opportunity to add some nice pieces at relatively inexpensive prices, or challenge you to find some of the more difficult pieces. If you have any pieces that haven’t been reported, please e-mail me at dbcham@iowatelecom.net