BugDoc Dave here. I see that the HOC and the Stretch Glass Society have had some very successful virtual meetings this summer and I hope that collecting groups figure out that we can have fun meetings and appreciate our collectables on a more regular basis. Not to every take away from in-person meetings, but it’s been fun seeing the collections where they “live.”

Anyway, this is the first Tuesday of August, so I’ve prepared a Tuesday Stretch for you featuring PLATES. Frankly, plates are one of the major items made in stretch by the manufacturers. Virtually all the companies made plates, except for a couple of the minor companies. I could fill several evenings with stretch plates, but many of you would probably lose interest because most stretch glass plates are simply that, plates without patterns. So, tonight, I’ll concentrate on plates with simple patterns and plates in unusual colors. I love plates in unusual colors and I can think of nothing more unusual than some of the “open work” plates made by the U.S. Glass companies. These plates were made from the #8076 bowl molds and usually end up being about 12-inches wide. My first one is in Pearl Blue which is a blue slag-type glass that can vary a bit in color: 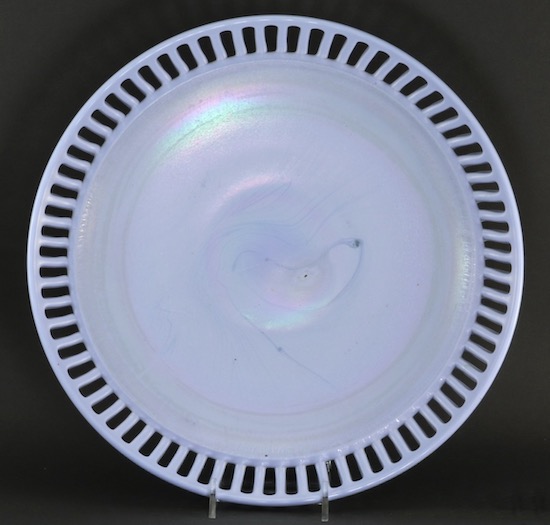 In the same line, a couple of the “coral” or orange-yellow to pink plates are also known. 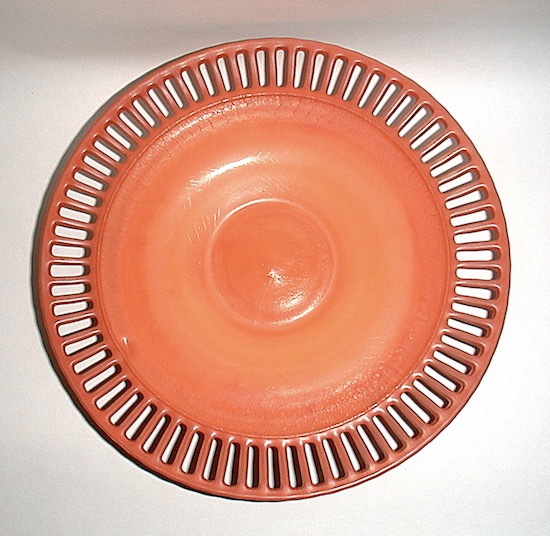 Most also think that Diamond is the only company that made black glass plates (their Egyptian Lustre effect), but we know of one from U.S. Glass! 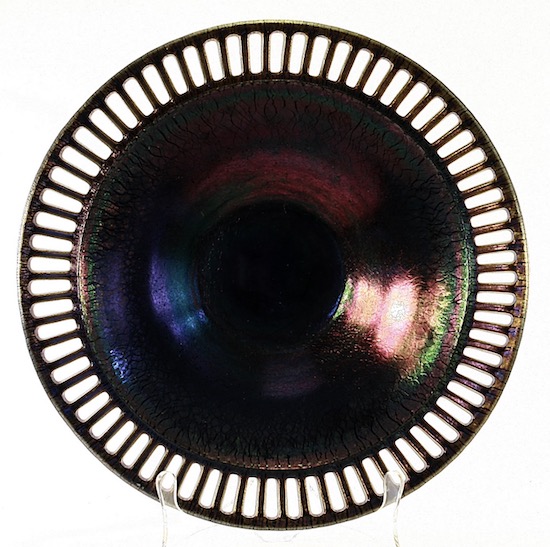 Speaking of black glass, I’m a real fan of the Egyptian Lustre pieces as the iridescence pops in so many colors. There is a 7-inch plate: 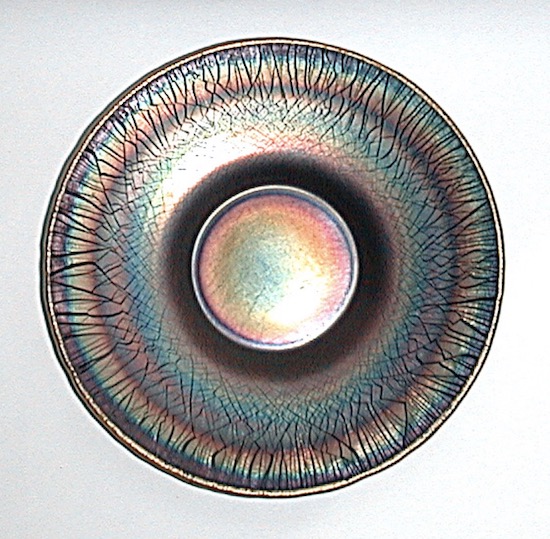 Other plates with patterns include the Fenton “Laurel Leaf” items. There is a hexagonal, 8-inch LL plate in Tangerine! 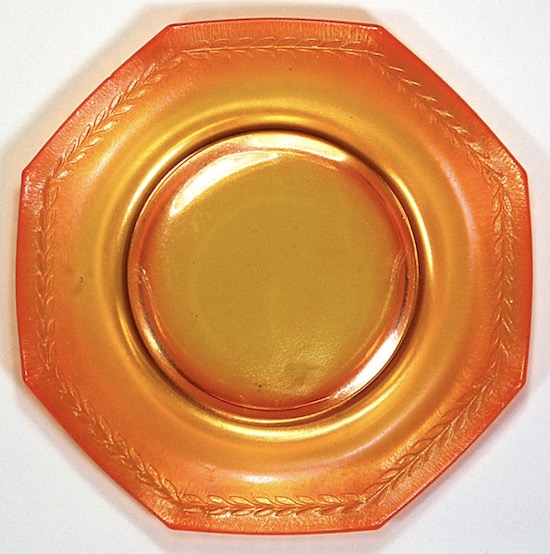 Fenton also made a line of acid etch design plates. Here is an example in Grecian Gold: 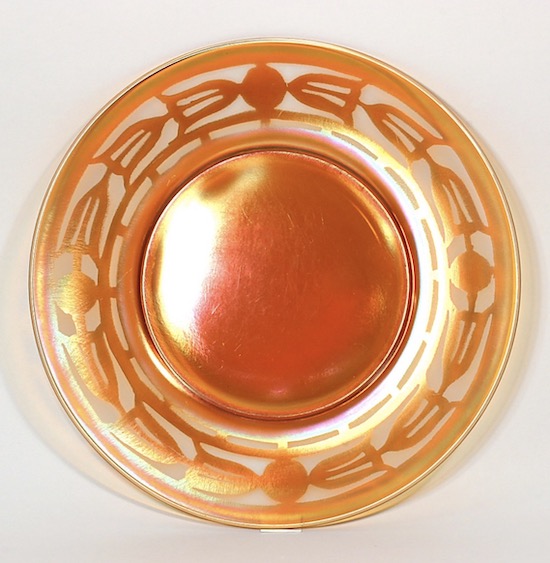 Of course, what collectors call “wide panel” plates are quite common, but many don’t realize that Imperial actually made several different lines with these wide panels and U.S. Glass also made one line of wide panel plates that can range from 6-inches to over 14-inches in diameter! The U.S. Glass plates are actually easy to identify because they made their plates in Topaz (Vaseline), Blue (like a light Celeste Blue) and an odd green, colors that are not seen I the Imperial plates. Also, all Imperial plates larger that 7-inches have snap bases while all of the U.S. Glass plates have ground bases. Here are two of the Imperial wide panel styles. Notice that in the first line the flat interior space is wide. 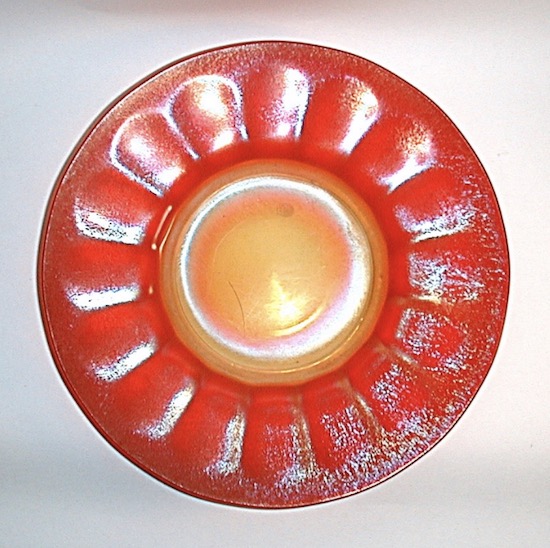 Here is second wide panel line where the interior space is much narrower compared to the panel space. 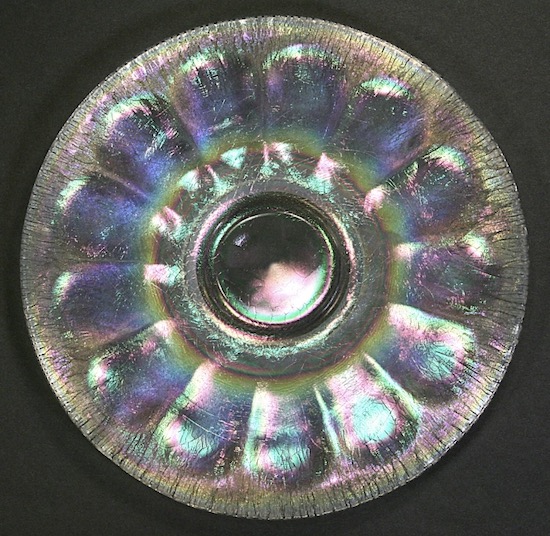 Finally, here is one of the U.S. Glass examples: 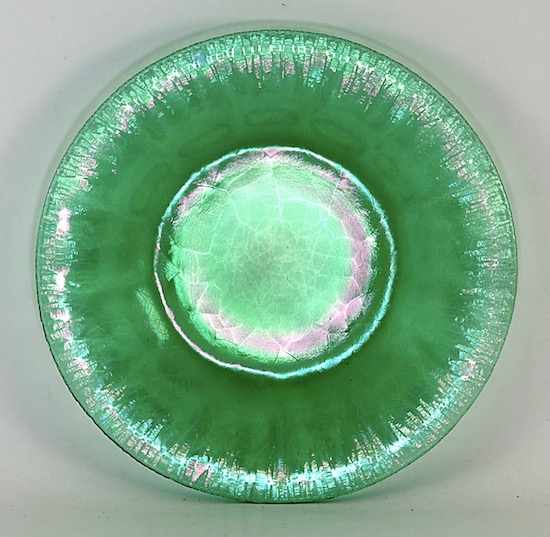 And now, to Alex Lee, who asked is it stretch or not?

We get this question all the time concerning stretch glass identification. Your little Fenton #400 vase is in Grecian Gold which is Fenton’s name for this marigold effect. For some reason, the Fenton workers seemed to rarely reheat and reshape pieces that were given the Grecian Gold treatment, so they usually have shiny to satiny surfaces, but occasionally with some really fine stretch marks. So, why isn’t it carnival glass? Berry Wiggins (famous glass historian and author) and Frank Fenton worked for several years to come up with a definition of stretch glass that the Stretch Glass Society could use. One phrase in that definition states that the pieces that were identified in a company’s line of stretch glass would be considered stretch glass even if it doesn’t have any definitive stretch effect! This was done to cover many of the pieces that were not reshaped after being doped (i.e., many candleholders, colognes, candy jars, etc.). However, since these pieces are in the companies’ catalogues and are clearly identified as being in the stretch glass lines (and colors), we consider them to be stretch. This leads to a few “issues” as Diamond appears to have placed their Royal Lustre and Ruby Lustre effects in their stretch glass line listings. Both have shiny, and in many cases mirror-like finishes. Technically, we would have to consider them stretch glass, but most stretch glass collectors feel they are something else – plain shapes with shiny iridescence. Fenton isn’t the only company that didn’t seem to give “marigold” pieces much stretch effect. Diamond is another company that made some great pieces in their stretch glass line with shiny marigold surfaces. Two of the best companies that really “stretched” marigold are Jeannette and Lancaster. Here is a Fenton #603 bowl in Grecian Gold and a Jeannette 10-inch bowl in their Gold stretch: 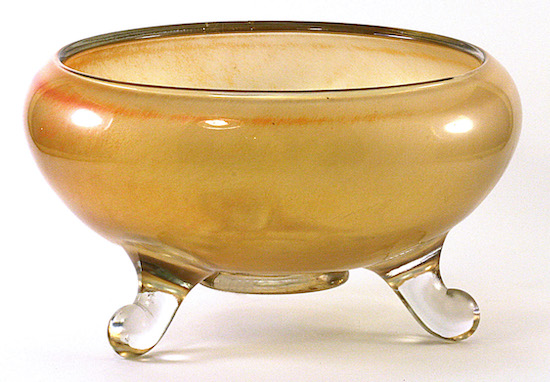 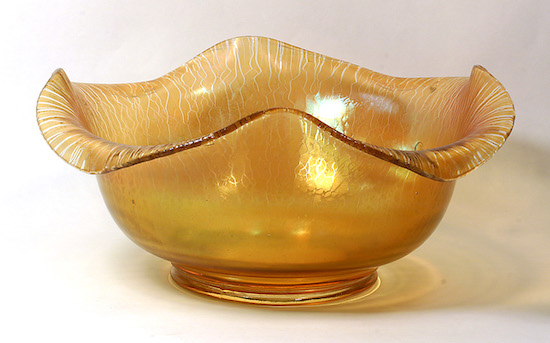