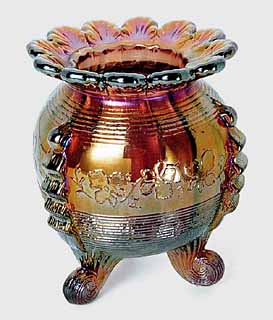 Fluted Scrolls was made in noniridized glass prior to the Carnival era. It is sometimes referred to as Flute Scrolls and Flower Band because of the flowers around the middle. According to author Carl O. Burns, it is also called Jackson by some collectors. This amethyst example is the only one known in this color and has a crack. It sold in early 2008 for $160, then on eBay shortly after for $198.