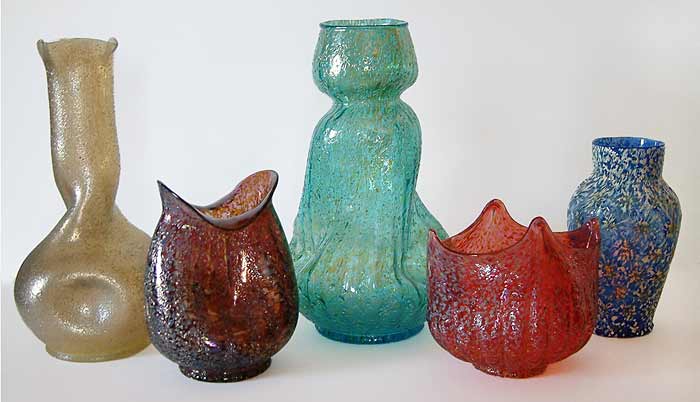 Carnival or Art Glass? Dugan's Pompeian Venetian and Japanese glass line production began 1905-1906. These pieces were blown in to a mold, rolled in frit (small pieces of glass) and shaped by hand. The line was likely created to emulate the European and American art glass of the day. Left to right are clambroth tall pinched vase, amethyst pinched vase, large twist vase in aqua, red peaked short vase or bowl and cobalt starburst pinched vase. Value range 75 to 250 dollars. 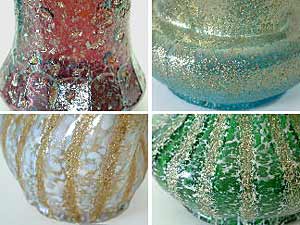 A distinguishing characteristic of the Dugan Art Glass production was the frit treatment of which examples are shown here. Other helpful identifying features are mold seams, tool marks and fire polished rims which may be irregular. 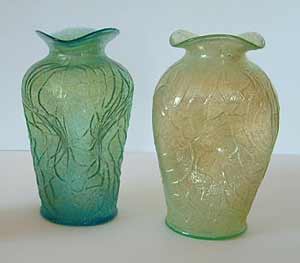 Stippled Estate vases are probably the best examples of Dugan Art Glass known to Carnival collectors. Shown are an aqua and lime green example. They also can be found in amethyst, canary and vaseline. With close inspection the stippled estate mold pattern can also be found in vases worked in other shapes and treatments such as the cobalt starburst pattern. Value range 50 to 150 dollars. 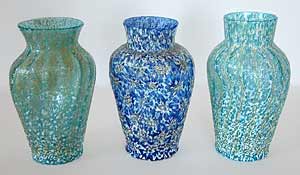 When viewed carefully, all three of these 6-inch vases display the Stippled Estate mold pattern. 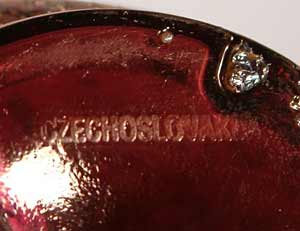 Dugan art glass is frequently confused and misrepresented as European art glass such as Loetz. The occasional piece can be found with a fake identification mark such as this example which bears an acid etched “Czechoslovakia” mark. 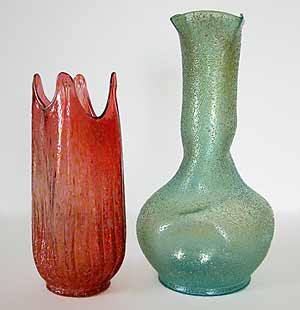 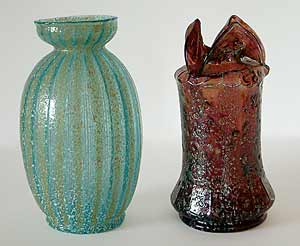 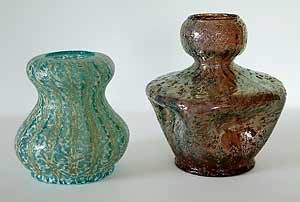 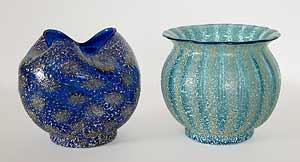 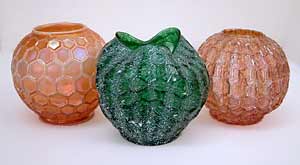 Dugan Honeycomb rosebowls with a variety of treatments. Note the typical Carnival version on the left. Value range 65 to 120 dollars. 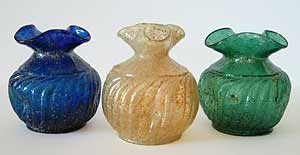 It's generally thought that these pieces are Dugan, but some collectors attribute them to Model Flint. Value range 75 to 150 dollars.

Solving the Dugan Iridescent Glass ID Puzzle
Additional photographs and information on Art Glass vasesBy Alfredo Villanueva Collado
Dugan iridescent glass presents interesting identification problems for the collector. To begin with, the only information available consists of a scant three pages in the 1993 Diamond/Dugan book by Heacock, Measell and Wiggins (henceforth referred to as the HMW). It appears at an intermediate moment in Dugan history, between the end of Victorian glass production and the development of Dugan/Diamond's own Carnival lines. The very nomenclature utilized by the company to market it originally already points to a variety of focuses or influences. In period catalogues it is indistinctly called Venetian, Pompeian, or Japanese, which all refer to imported fashion crazes of the period. Two line drawings from 1906 Butler Brothers's Catalogues offer “Venetian” assortments at 86 cents per dozen mixing Hexagon Button, Stippled Estate and other decors. Pompeian vases are referred to as “exquisite Tiffany pattern glass, iridescent and resplendent in wine and ruby colors.” We could safely then say red and purple vases are Pompeian, except that these vases are also offered as Venetian! (HMW, page 50). Even the term “iridescent” can be misleading. Some vases are truly iridescent while others get their sparkle from the glitter of frit.

On eBay Dugan can appear as Loetz, Czech, Carnival, soda glass, volcanic art glass. The EAPG website used to carry it for sale. It shows mold marks and yet exhibits a workmanship associated with “art glass.” Thus, no small wonder it has even fooled experts on both sides of the Atlantic. It is classified and pictured in the 1989 Passau Museum Catalogue as “Unidentified Bohemian,” and as such it also appears pictured in Robert Truitt's Bohemian Glass I. And let us not forget the British connection: Tom Dugan was a cousin of none other than John Northwood of Portland vase fame, and thus heir to a quite illustrious British glass making tradition.

In order to make some sense out of all of this seemingly contradictory information, one must begin by stating what Dugan iridescent is not. It lacks the features of both Victorian and Carnival. It does not resemble Tiffany in shapes or iridescence. In fact, It does not resemble any of the other American art glass of the period. What does it then resemble? European art glass, most specifically art glass coming out of the great Czech glasshouses of the Art Nouveau period. But art glass also responding specifically to the Arts and Crafts/Christopher Dresser ideal of bringing art objects to the common man. Art glass for the masses, mold blown, but hand-finished.

The Art Nouveau aesthetic is characterized by the concept of organic form, a definite break with the classic ideal of harmonious shape. Glass is pinched, twisted, stretched, distorted. Its surface is no longer only the passive recipient of etched or engraved decoration but becomes alive by means of pattern and texture. Christopher Dresser's Clutha glass, which had such a decisive impact on Czech glass production, emphasizes roughness, a sense of imperfection revealing process, the craftman's hand. These are all characteristics present in Dugan iridescent glass (as opposed, for example, to the formal perfection of Tiffany and Steuben glass, or to the stogy Imperial Art glass which would soon follow Dugan's).

A comparative study of Czech and Dugan vases reveal surprising similarities as to shapes and textures. Dugan vases become smaller versions or interpretations of their larger Czech counterparts. They would have been recognized as such by the European immigrants, now American workers, who had long wished for the more expensive American and Bohemian luxury art glass. Thus, at the same time Dugan iridescent wares were offered as “Tiffany pattern glass,” they could also be advertised as “exact reproductions of expensive imported glass” available in blue, green and amethyst (HMW, page 51).

Alfredo Villanueva Collado is Professor Emeritus of English at Hostos Community College, City University of New York. A long time collector of Czech and American Art Nouveau glass, he has published in Hobbies, The Journal of Antiques and Collectibles and www.loetz.com, and until recently served on the Board of the New York Metropolitan Glass Club. 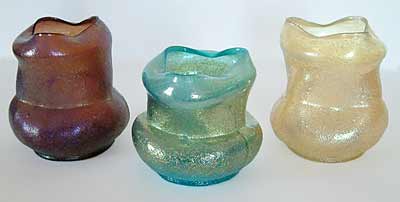 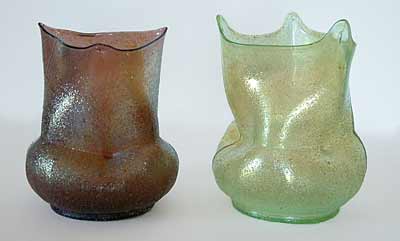 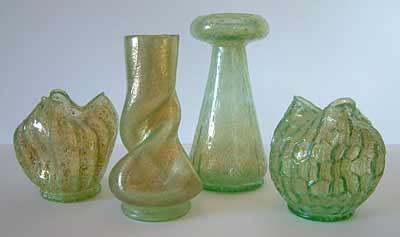 Is all lime green vaseline?
Many collectors have interest in Vaseline glass which will fluoresce under UV light due to the presence of uranium salts. While many Dugan pieces have the “vaseline” color in natural light, not all will glow as these pictures demonstrate. This is due to the chemical composition of the glass. From left to right are rose bowl, double twist vase, hyacinth vase and honeycomb pinched rose bowl. Value range 75 to 150 dollars. 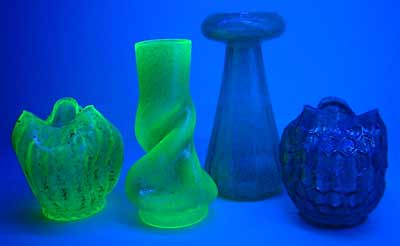 Value ranges are offered as a general guideline only. Rose bowls would be at the low end with tall vases and unusual shapes being much higher. Prices will be higher in shops and lower on eBay as a rule.