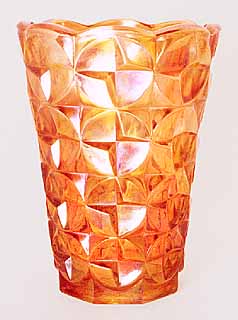 This vase is named for Richard Thorne who showed the first known piece at the 1999 International Carnival Glass Association convention. The pattern has rows of quartered circles around the pattern. Glen Thistlewood discovered the pattern in the Walther-Sachsenglas catalog where it was named Luttich. The marigold vase at the left is 5 3/4 inches tall and has four rows of the circles, while the vase Thorne showed had five rows of circles.