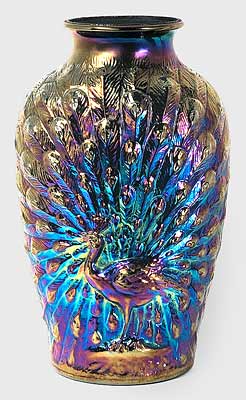 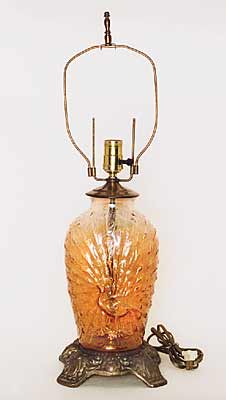 These interesting items are found two ways; either as a vase (undrilled) or drilled to make a lamp base–sometimes actually mounted to make a lamp (right photo). Regardless of color, they are made with clear glass. The purple and red colors are inside with the iridizing spray on the outside. The marigold and white examples are uncoated on the inside, the exterior sprayed with either the orange or pastel iridescence.

In 2006, I received an email from James Harris, a long-time collector of Carnival who has one of these lamps with an original oval sticker. It says it is made by The Hocking Glass Co, Lancaster, Ohio. It also has the number 196 1/2 a3, which he suspects is the store's catalog number. Many thanks, James–good to have this information.

The below prices reflect sales of either the vase only or the vase made into a lamp as the addition of the lamp parts appears to make little difference in the value.