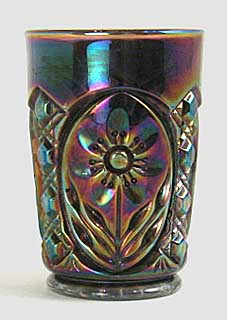 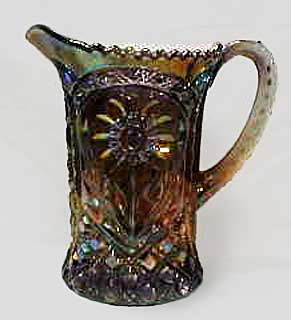 This is a very confusing pattern for collectors. At a glance it appears to be Imperial's Four Seventy Four. The main culprit is the large daisy-like flower that dominates on both patterns. However, if you look closely you can see that the other details are quite different. For example, on the Mayflower tumbler there are panels of hexagons between the daisies while on the Four Seventy Four there are arcs that curve over the daisy. On the Mayflower pitcher there is an arch of latticed lines over the daisy; on the Four Seventy Four the same arcs as the tumbler. This was Imperial's pattern #678. It was made only in marigold and smoke.