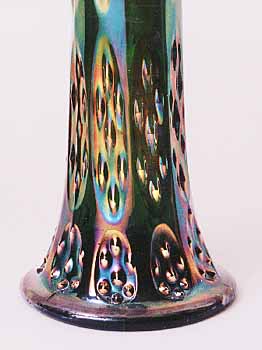 This pattern is sometimes misidentified as Fenton's Knotted Beads because of the similarity in design. This one has nine ovals around with seven regularly placed hobs in each oval. Knotted Beads has six ovals around with connected beads. It could be that Long Thumbprint mould was modified to make the Long Thumbprint Hobnail vase. All colors are quite scarce in this pattern.