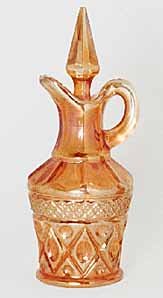 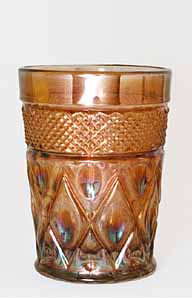 No records of any tumblers selling at auction. There are ice tea tumblers in a similar pattern that are known to be new.

In May 2004, Carl O. Burns sent an email with the following information:

At the Imperial Convention in 1997, I had lengthy chats with several former Imperial employees, including the former plant manager & Lucille Kennedy, the long time Director of Marketing for Imperial. One of the things I asked her about was the Carnival Cape Cod items, as I at that time owned a Tumbler. Here's the info, straight from the “horses mouth” so to speak.

Imperial made ALL the iridized Cape Cod pieces in 1976. They were made on special order for Levay Distributing Company. None were trademarked. It was felt that it was not necessary to mark them, as they had never been made in “classic” Carnival. (And, in fact NO pieces in the Cape Cod pattern, in any type of glass, were ever trademarked.)

They made the following in iridized Cape Cod:
Cruets……300 in Marigold
Punch Cups……100 in Marigold
Tumblers……100 each in Marigold & Lavender
Total……600 pieces all made for Levay Distributing.