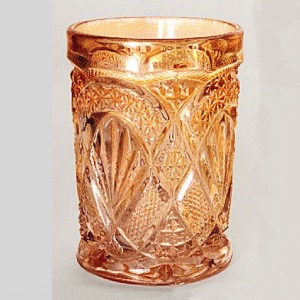 Manufacturer: Cambridge
Year(s) of Production: Circa 1903
Pattern Description: The pattern contains what looks like a fan palm under a banner of stars.
Similar Patterns:

The pattern contains what looks like a fan palm under a banner of stars. It can be found in a 1903 Cambridge Glass catalog as item #2577 (and is in an Ohio Flint Glass catalog as #808, circa 1897). In Welker's “Pressed Glass in America” they stated “National Glass which operated both firms here transferred molds from Ohio Flint to Cambridge.” The marigold flash of the late 1890's is lighter than this appears to be (and a little early for carnival glass), so the assumption is that this one was done by Cambridge. In 1995 one sold at auction for $110.