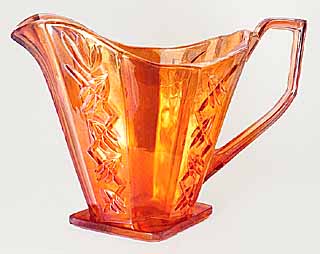 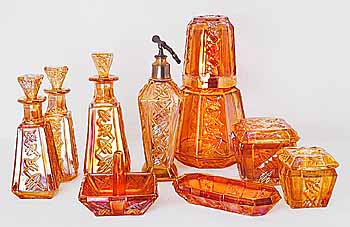 This pattern, by the Czechoslovakian maker Josef Inwald, has incised zig-zag shapes on panels. The pitcher was photographed while in Nola Smocker's collection in 1994 and was named by Richard Cinclair for her. The dresser set pieces are courtesy of Galen and Kathi Johnson. The only reported piece to sell publicly was a 5 1/2 inch tall cologne bottle in marigold that brought $105 in 2001. In 2005, on eBay, a group (tumbleup, 2 colognes/perfumes, covered box, pin tray, and ring tree), sold for $760. A 10-inch vase has also been reported