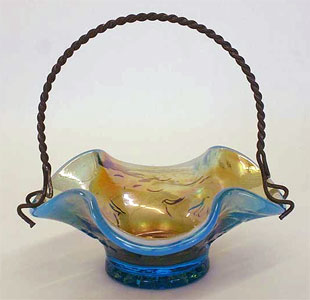 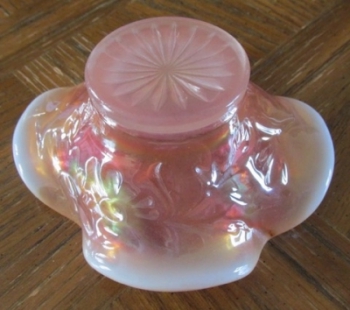 The Miniature Flower Basket can usually be found with a wire handle. It is known in marigold, blue opal, peach opal and marigold on milk glass. This pattern has two flower branches each with leaves and one flower blossom. Extending on each side from the flower is a branch with leaves and a bud or smaller flower. The pattern is intaglio and is a bit hard to see. The base has an eighteen point star. The base measures one and three-fourths inches. The four-ruffled top measures four and one-fourth inches. (These top measurements may vary due to the shaping.) This piece shows four mould lines.

This pattern is usually attributed to Westmoreland. There is a separate pattern called Miniature Intaglio/Intaglio Flower that is sometimes confused with this one. Carl and Eunice Booker have a great article defining the differences here: Confusion in Miniatures