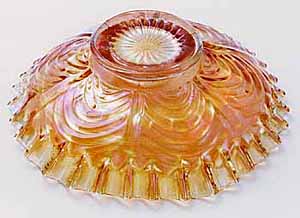 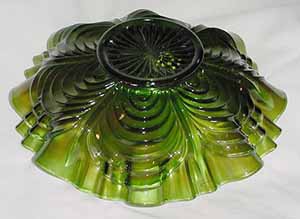 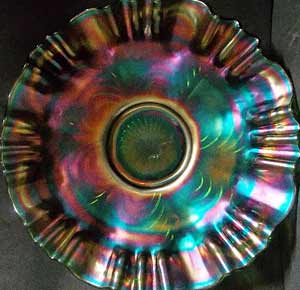 The pattern, which is on the exterior only, consists of groups of loops that extend out from the collar base and ribs that separate the groups. These 9-inch marigold bowls are found with three-in-one edge, crimped edge or ruffled edge. Seldom bring more than $15 at auction although they sometimes bring more on ebay. There are two Carnival vases known. In August, 2003, Steve and Marti Fink reported that they have a green example with three-in-one edge, and sent a photo of it (center). In 2013, Nancy Bishop sent me a photo of her green 3/1 bowl,(above right) wondering if it could be the same as the Finksand and it is.